I’ve taken a break…a long one :ba:, spent time away from projects and such (so much unfinished work!!?). So after I did a brilliant Doctor Who marathon last week (all four seasons in three days, my eyes were bleeding) I decided to do some really accurate, detailed models of show props.

This is the first of a series which will hopefully include The Master’s Laser Screwdriver from “The Drums of War,” Professor River Song’s Sonic Screwdriver, the fob watches and Chameleon Arch The Doctor and The Master used to become human in Series 3, The Master’s ring, the Timey Wimey Detector, the TARDIS (of course!) interior and exterior, maybe a Dahlek or Davros’ chair, maybe more depending on a few factors. The modeling for most of these is well underway.

I’m going for realism and authenticity, so any suggestions on what I may have gotten wrong is appreciated. I couldn’t find a lot of detailed images or schematics for the show prop but I think I did a pretty decent job recreating it from what I found and screenshots. The spec hides the internal stuff in the extender and some of the details, when I get a better render you’ll be able to see. The textures need some tweaks, other than that… 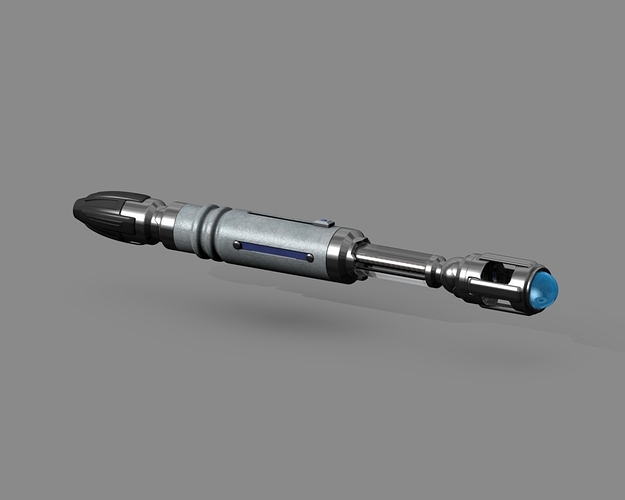 The screwdriver looks great.
I don’t know if you’ve seen this on the BBC website but I think it will help you with some of your other models. http://www.bbc.co.uk/doctorwho/gallery/concept_2007/index.shtml

And, nice use of the crackle generator

Only the back side thing (the gray one) looks kinda strange to me… supposed to be plastic?