The Dropdown Menu On Group Nodes

Hi folks. I’ve made group nodes in the past that only do one thing, but now I’ve made a very simple image texture node that draws a Sine wave and I’d like to to be able to use the group node’s dropdown menu to change it to drawing Cosine or Tangent graphs, similarly to changing the maths operation on a maths node. I normally try to avoid having to figure out how you’re supposed to use the dropdown menu or do something like changing the colour of a colour ramp, because YouTube videos tend to be full of half-informed guesswork or just nonsense, and general internet searches tend to bring up solutions to different problems.

I’m still adjusting to the UI changes since 2.79, so I’m guessing its because I chose a bad time to learn new tricks, but I can’t find any options tthat look like they might be what I want. Can anyone help me out with this? I’ve added a screenshot to show what I’m talking about, just incase the thing I’m just calling a dropdown is known by some other name, to avoid confusion. 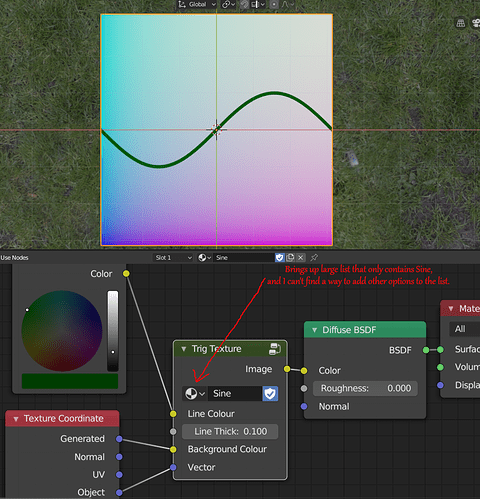