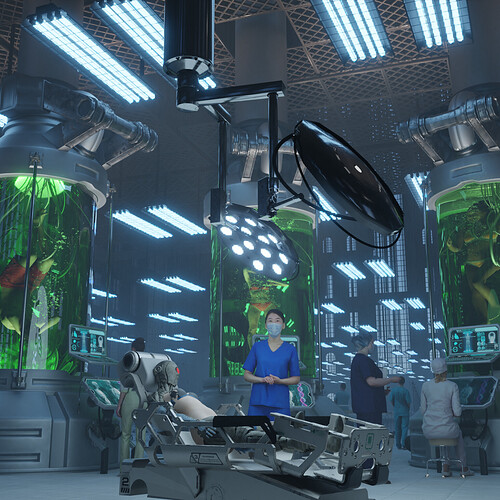 interesting. The post I just made has to await approval by moderators. There is nothing questionable or offensive in it. Let’s see if this one posts normally.

It did. Let’s see if it was the letters nswf I used when discussing the clothing of the tube people. This post contains those letters so …

Update. It was the word “xude” but replace “x” with “n”. That triggered moderation.

I think there should be more growth tubes. Many more or arranged to imply that there are many more. That would mean there is high demand for the parts. Also the large factory space is mostly empty so fill it with growth tubes.

Something is not right about the patient/recipient’s right “side boob”. Does the bra intersect the body geometry? The black splotch, if intentional, is unclear in meaning. Is it more cyborg stuff, diseased flesh, …? Also the recipient is floating above the bed which may be intentional.

The people/bodies in the tubes should be nude but that causes nsfw. Maybe give them something like one piece swimsuits with a little sci fi style so their clothes don’t look like normal clothes or place machinery to cover the “naughty bits”.

I feel like you make some great scenes. With a little tweaking they might read better. I tried darkening the background, increasing the saturation on the tanks and adding bloom and increasing contrast, changing the floor color and adjusting the nurses color temp to cool.

Hey thanks for your feedback. In the back was a giant hospitalward with many beds but due t the perspective you cant see it. I made a new version with more tubes now. So the back isn’t that empty anymore. Good tip. The bra your correst meshes intervened. 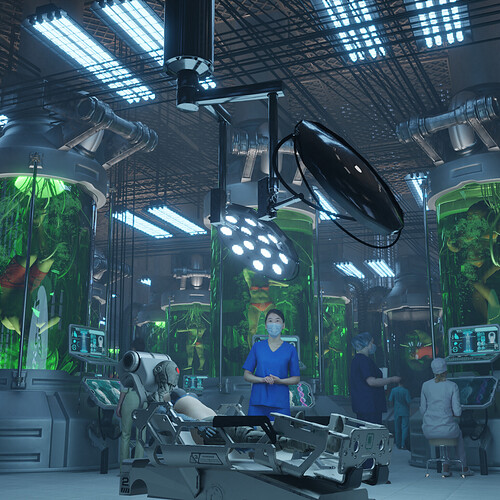 Thanks for your feedback. I find it allways difficult to get the right lighting for a scene so there is plenty of room for improvement there for me.

This is good but it could be much better by fixing the framing. This is just my personal opinion, so make of it what you please.

The whole top third could be cut away. Try tilting the camera down and move it up a bit. The doctor is looking at the camera and I keep wanting to look at her but she’s lost in the frame. My eye keeps being drawn to the light fitting for some reason and I don’t want to look there. Try not to cut the bottom of the patients bed so you can move the camera to get it all in.

I hope you don’t mind, but I did a quick edit in Photoshop to give you an example of what I would find a better image.

In fact, I would even drop the camera lower and maybe crop the sides a bit more too. Make the bed and the doctor the real focus of the scene. Maybe dim the lights in the background slightly so the foreground stands out a bit more.

Again, this is just what I would do to the scene 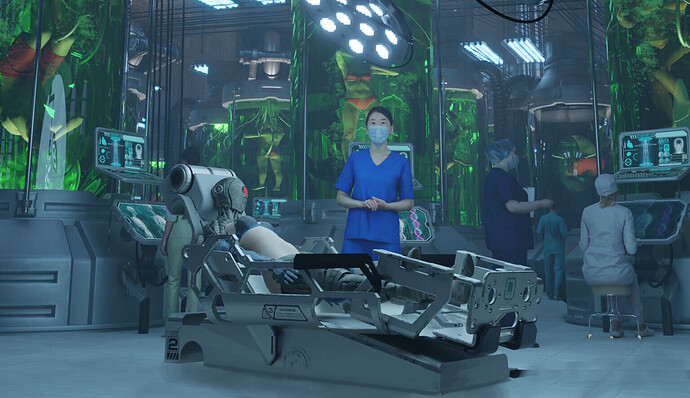 Thank you for the feedback. You got a point here. If the picture is cropped it got more focus. What i intended by the bigger picture is to show it’s a large space where everything happens. But maybe you are right and is it too much. Thanks for your words.

I think what this shows is how to crop the bottom. Seeing the full bed is nice and some shadow could help to make it not look floaty.

I’m gonna check what results this will give. 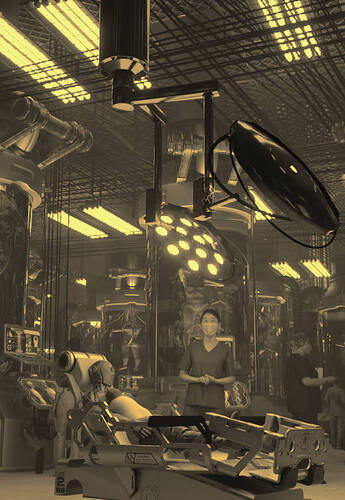 The top lights really make it look like a warehouse or factory. But I do agree about darkening the background.

I get what you mean by wanting to show the “warehouse” style of a big laboratory, but for me the focus is the woman because she’s looking into the camera. I love her position and the hands, as it looks like she’s expecting a photo to be taken, that she’s kind of showing off the new patient.

With advice, analysis, critique: You are the artist. It is your picture. Consider advice that makes sense to you but create your art, your way, with your vision.

I like the cropping of the first picture except a little could be trimmed off of the top. That is because there is not much happening there. I like seeing the massive hinge things on top of the tubes. The square shape of the first picture would be lost though. Square can represent inflexible, industrial, tyrannical etc. that gives a de-humanizing effect.

I think cropping to focus on the doctor and patient is not needed. The doctor and patient and bed are emphasized well already since she is looking at the camera, the viewer, is in the horizontal center of the image, and doctor/patient are in the foreground. Too much focus on this or that can eliminate or de-emphasize important story elements.

A tube in the background on the right looks different than the others. It is not clear what is happening there. Maybe it is a lens or refraction effect. I would make that one look similar to the others, even if that is not physically realistic, since it is distracting.

So, that’s why your eyes go straight to the lights and then wander around among the lights, not really considering thedoctor, or the gray people in the background, or what’s in the tanks. I would suggest repositioning the camera altogether, and making it much, much tighter. Decide what story you want to “tell at a glance.” Use the light-path trick to present the elements of that story, and don’t include anything in the frame that isn’t part of that story.

When looking at real photos, I had a pair of “cropping el’s,” made from a picture frame board sliced in half diagonally. I used it to look for “the picture within the picture,” and almost always found it. “Less is More.”

Good comment thank you i will keep it in mind for my future projects. Good tip.

Thanks for your opinion on this. Indeed there is more tro learn for me. So i will keep this in mind. What you meant is the tube on the right where the glass makes a bit of a strange twist. I could rotate the tube a bit and it is gone i think.

Just one more render with a tilted cameraview. 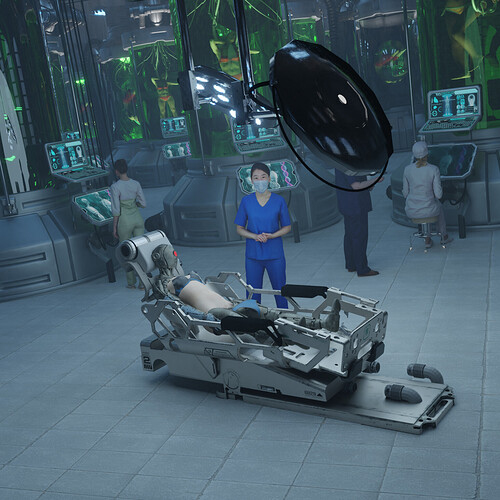