The Fall of Lamron [WIP]

I am (or should I say “we”?) working on a game (if you’ve been at the Club Penguin 3d thread I made, you should know about it). We started to make Club Penguin in 3d, but found out that we could not because of copyright laws, so… we started a new game.

The name is also WIP, it might change later, but thats what it is for now.

As I’ve said, “we”, the “we” is anyone who wants to work on this. There are a few modelers already, and we need someone who does scripting (not a newbie scripter), an animator, and more modelers. Just post saying you want to help and you’ll be in the credits!!

Aliens stole the Gold Sun Statue from the land of Lamron. The people of Lamrom depend on the statue for comfort and peace in their everyday lives. Strong warriors must return the statue before Lamron falls into ruins!
Pretty basic I know.

************** GAME PLAY *******************
This is how the game will be played. Feel free to suggest anything new!
When a person starts the game in Lamron, he/she has a knife. His/hers first task is to kill 5 evil creatures which roam the outskirts of the town. (creatures like rats, wolves, bears, and spiders). He can also collect gold coins (sometimes dead creatures will have them hidden inside) and purchase weapons (at the market) and spells (at the library).
He also needs to keep his enegery high, and eating pizza will do the trick. It can also heal you a little. He/she can buy pizza or eat pizza at the pizza place.
JOBS:
There are many jobs around Lamron that will earn coins and Experance points. Quests for villagers.
PORTALS:
The portal at the north side of Lamron takes you to the “in between lands”, the land in between Lamron and the land of the aliens (need a name). You need an X amount of Experience points to use the portals, which you get by doing quests and killing evil creatures.
--------------------------------
WE NEED ANIMATORS 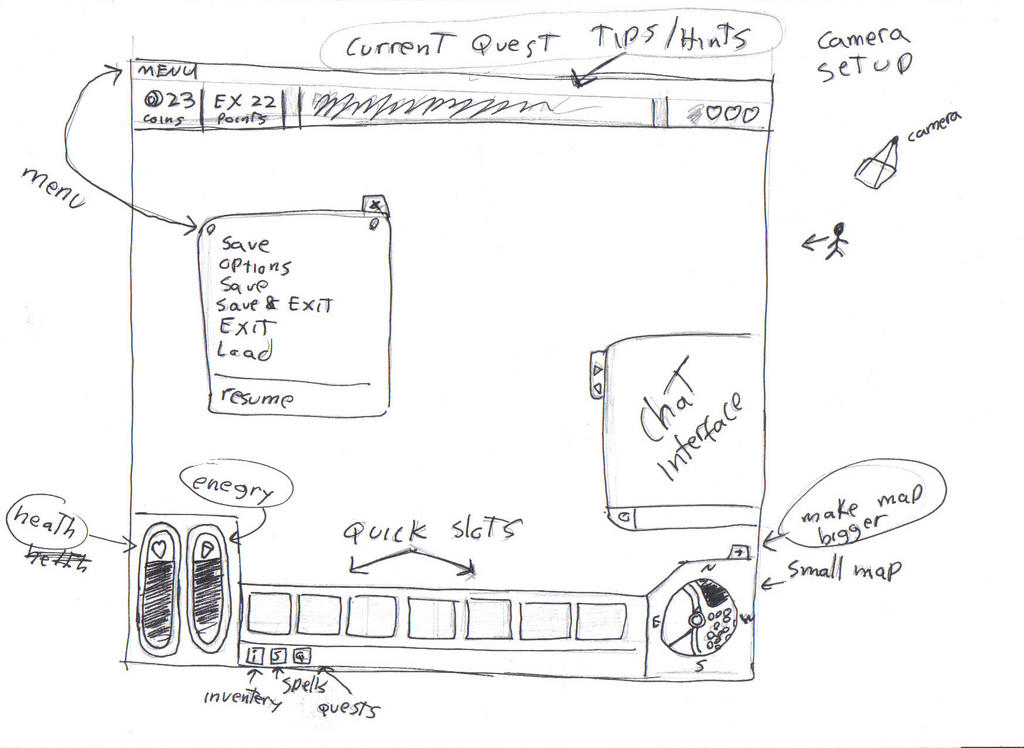 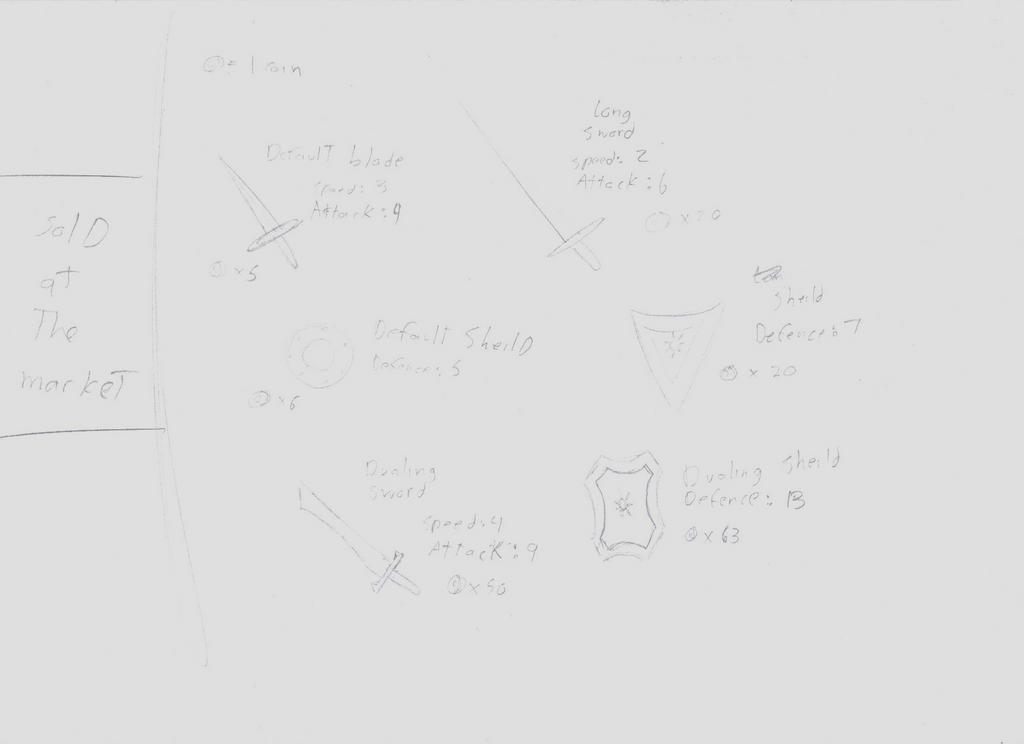 hey, have you seen the 2d filters in the new blender 2.46!?!?
they’re awesome, maybe you could use them in your game!
and good story btw!

Thanks Fredred! No, this is going to be 3D.

Here is a screenshot of the Pizza Shoppe (If you have a better name for it post it!)
I have to add the door, windows, and model the sign. I attached my blue prints also, in case anyone wants to start on the inside (upstairs and downstairs, both are connected in less that’ not a good idea) 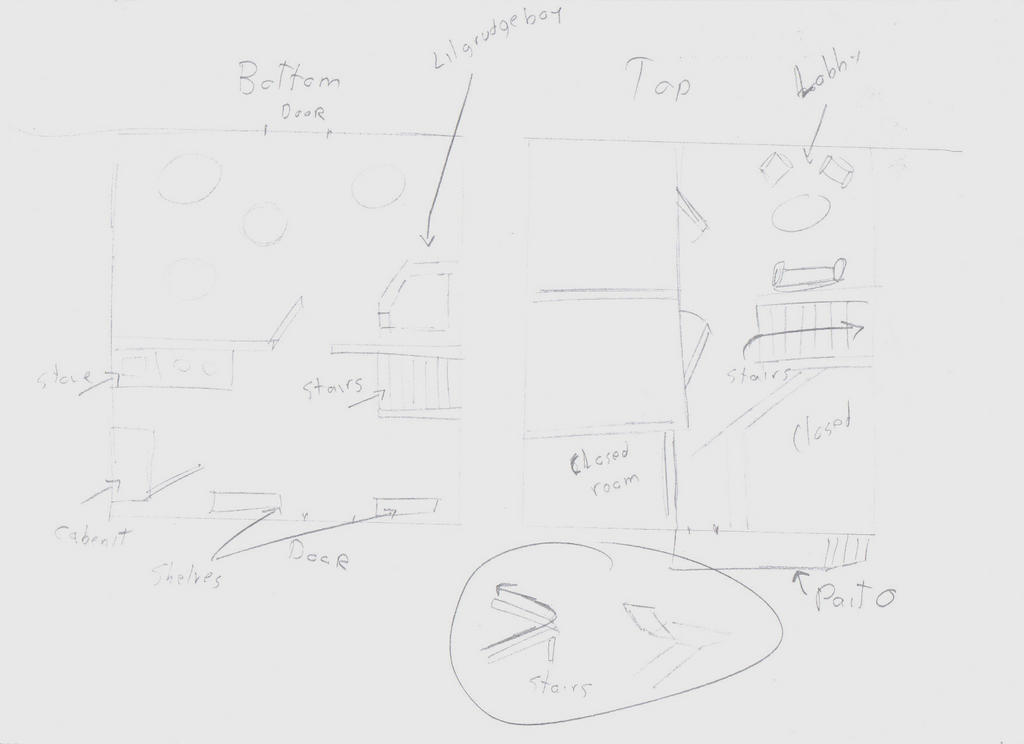 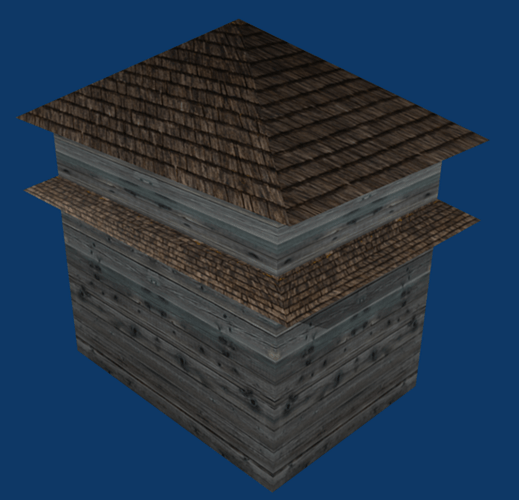 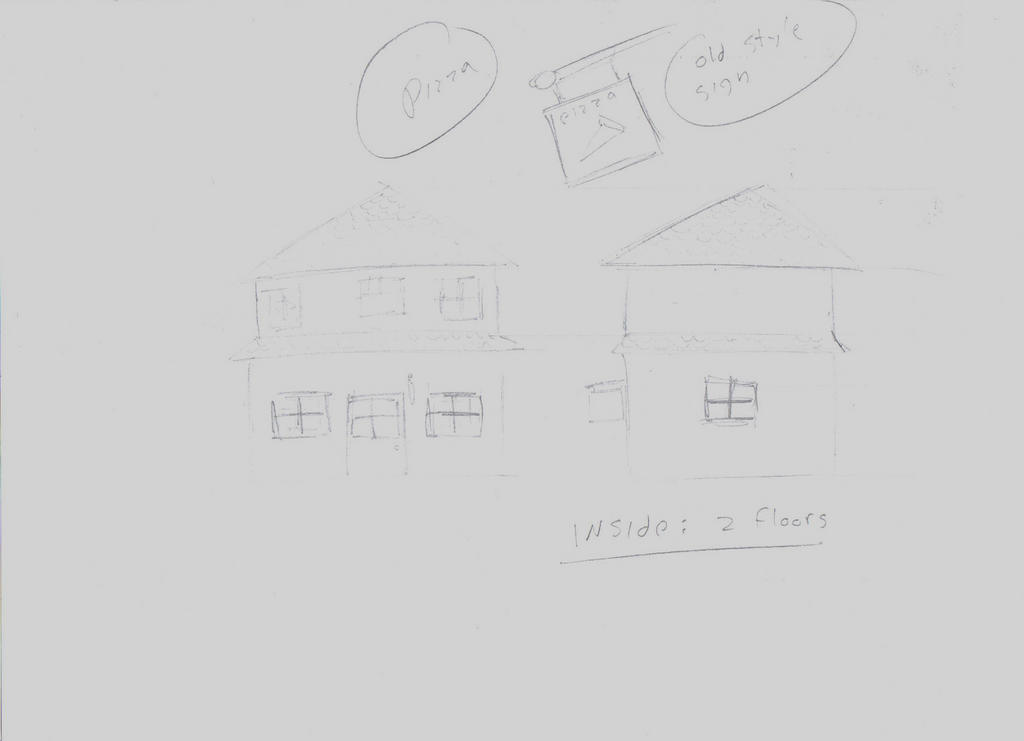 BTW here is another update on my pizza shoppe. And C&C?

Note: I still have to add the windows all around the building, not just on the sides showing. lol.

And I will Draw some more blue prints if anyone else wants to model a building. I also attached the map of the town SO FAR! If you have any building ideas please tell me so I can add them to the map. 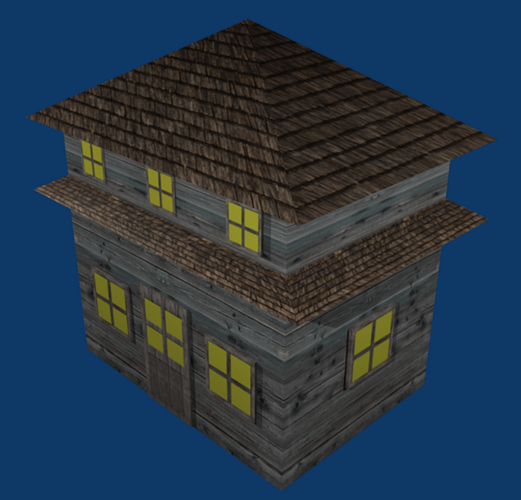 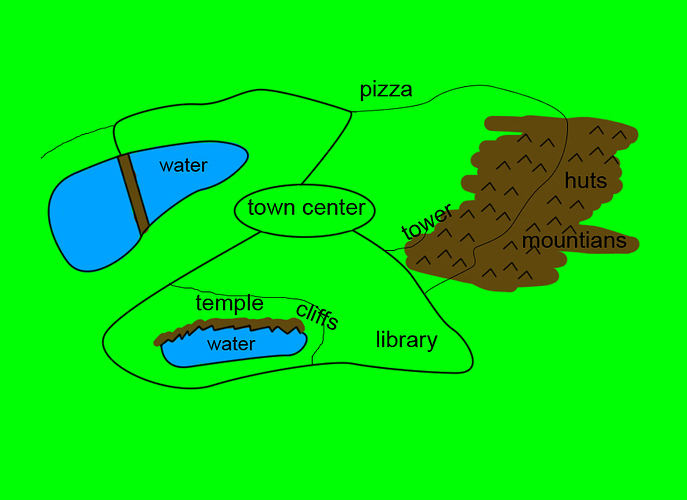 Well it seems you’ve gotten off to a great start. However, you shouldn’t get too ambitous. For example, your game style depends on whether or not you get a coder (styles being MMORPG or RPG I assume). The thing is that MMOs are designed completely different then your standar RPG. Also even with experience in the BGE a lot of what your aiming to do usually isn’t achieved.

My advice would be to keep your goals clear in your mind and take everything in steps. Good luck and you can count on me watching this thread.

Thanks Sanguine, but I wont be working on this alone.

Here is another Pizza Shoppe update.

Edit: is this to high polly? I made it as simple as I could, really I did!!!

Its basicly a cude that I extruded. The windows, doors, etc are all planes extruded very slightly and UV mapped. 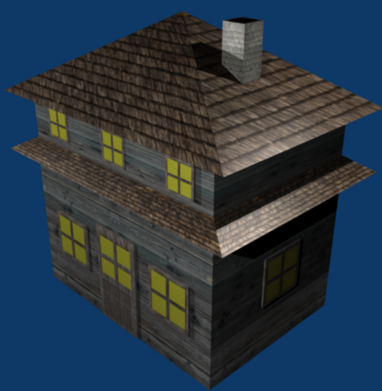 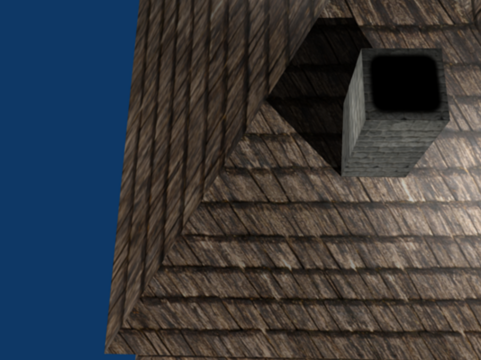 Show us a wireframe shot to estimate your polycount.

Ok, here are the wireframes! 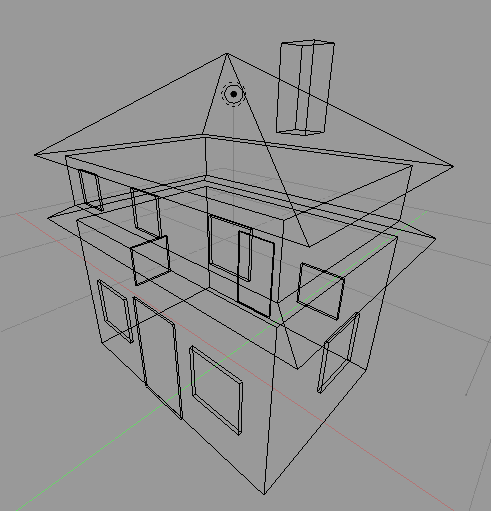 Nope, its pretty low poly to me, and I agree with Sanguine. No MMORPG, correct me if im wrong, has been a success with Blender. Maybe you should try cutting it to a simple RPG at first and build off that.

Anyway, it looks pretty cool to me and I would like to join, Im good at modeling, UV Mapping, and Texturing.

I can make mainly architectural stuff but also small props where you can insert here and there to make it look more realistic. So anyway…I would like to join so I guess you can PM me if you want me.

Your call on if you actually want to do this or not, but I’d say you could just about 1/2 the polys just by having the windows be part of the wall texture rather than being extruded mesh.

Not sure how lean you need the model though.

Nitty: I might cut it down, but Enternal Lands is popular, and fun! lol

Blendiac: to make it part of the mesh would mean making some loop cuts in the main cube, and that messes me up doing UV mapping, or did untill I got the new version which made it so I cant do it at all lol

Why are the windows yellow? It looks weird.

What should I make them? I am open to any ideas!!

Anyone who wants to help model, post here and I’ll sketch up some blue prints for you, or maybe you want to sketch it? It’s up do you!
This is a user contributed game, anyone who wants to take part in it, feel free to do so!

Hopefully soon I will have the official forums up for this project. Look forward to it!

Concerning whether or no you should make the windows simply textured on or extruded I believe should be decided on how detailed you want it. I personally would apply a texture for the windows and add details your roof which seems completely flat compared to the bulk of the house.

Also I’d have to agree with PlantPerson, the windows do look odd yellow. What’s happening in the house should reflect how the windows look outside. Also if it’s night then you could add shutters to give the appearance of a closed building.

Furthermore, you do relize your buildings won’t look that good in game, as those are renders screenshots.

During the day, windows look dark and partially reflect the outside. At night they become transparent and you can see in from the outside. (if lights are on) so deciding what time of day it is will influence what the windows look like.

Alright, I can change them, maybe to a light blue?

Yeah, so the texturedness I see in Blender (not rendered) is what I’ll see in-game?

Alright, here is the town center. They are all in-game (i pressed “P”), not rendered. I also have a problem with the door not texture, does anyone have any ideas? I also attached a wireframe. 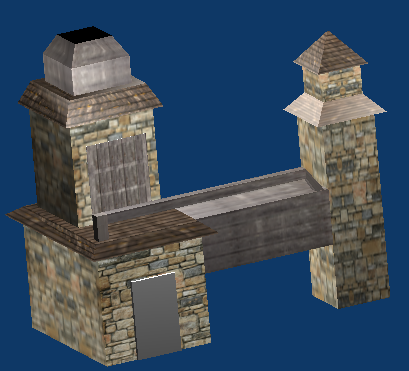 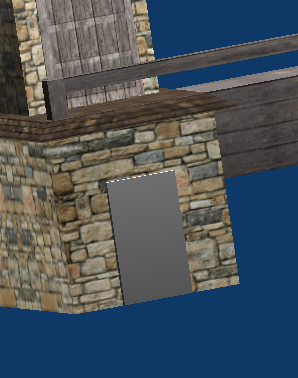 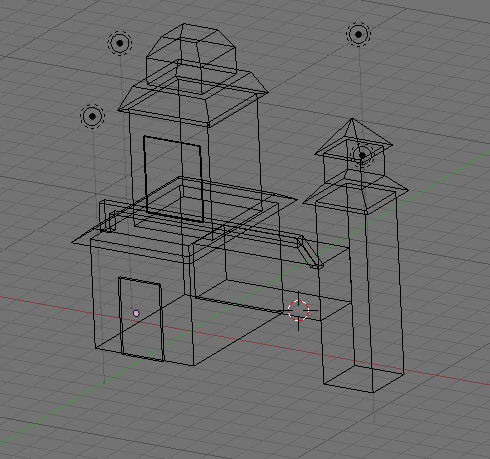 that is going to look badass damn, only crit i have is to lower the specularity, buildings shouldnt really look that shiny, other than that, nice idea, nice models too, we need to colaborate for real man

It’s shinny because it is a render.
But thanks!

we need to colaborate for real man
I dont get that.