Trying to do some landscape again. A lot of details are to be added, and the grass needs fixing, it looks strange. Fences are not that good too. What else can be done do you think? 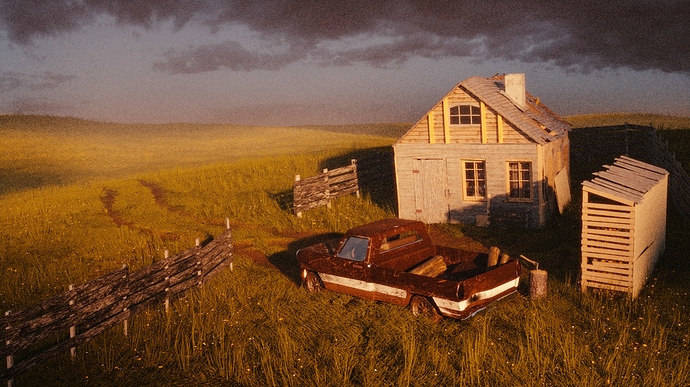 There’s really large, very black shadow which starts in the far right side of the back yard which is not logically cast by the house, judging by the apparent light source direction. This shadow extends into the field beyond seems to continue beyond the image frame. The object casting this shadow ha to be off-camera due to the direction of the light source. And it would have to be something huge! What could possibly cause this ominous shadow in an otherwise barren landscape – a UFO?

Agree with liasaurus abt scale. Texture on fence if the problem with fence. also liasaurus is right abt the shadow. i quite like the lighting right now.
The house n shed need to be more dirty.
truck is awesome

the atmosphere is very nice here…if your goal is to give a feel of loneliness to the whole picture, you’re on a good path! I agree that the scale is a little off, and the shadows generally make it seem all a bit small…a miniature i don’t know…i hope you choose to maintain the lonely feel into this; is really awesome!

I wonder if that fence wouldn’t look better (and more rustic) if the horizontal slats were a little more sparse? Maybe reduce them to 3 per section, give them wider gaps, and make them more uneven and sun bleached.