Right! Not a lot to say about this one other than it’s based off of a concept by Cory Loftis.

Premise - A young blind boy visits the local pond and encounters the frog king who has sympathy on him and grants him his sight.

Let me know what you guys think! 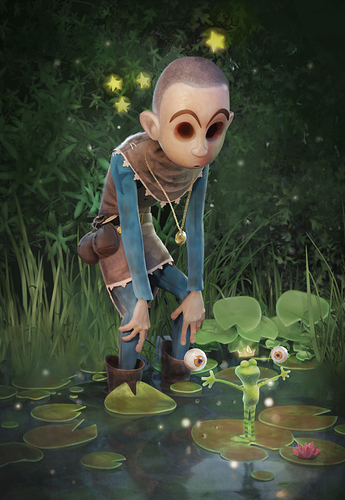 My only criticism is that the frog reads as facing the wrong direction. Took me about 30 seconds to realize the frog was facing the man. The eyes protrude so far, with heavy creases on the back, and the shadow on the back of the head could be mistaken for a smile. The frogs hands could be read either way. The eyes floating above his hands almost get assigned to the frog itself furthering this misconception until you realize the man is missing his.

If you bring the human eyes forward forward of the frog (as if the human was still looking at the frog despite the eyes floating) and diminished the shadows behind the eyes and head I feel your image would tell it’s story far better.

Nice scene! I didnt either noticed what Joashua_Reimer said.

PS what does the original illustration look like? I tried google but couldnt find anything???

Thanks glad you like it! Here’s the original illustration for you to check out. 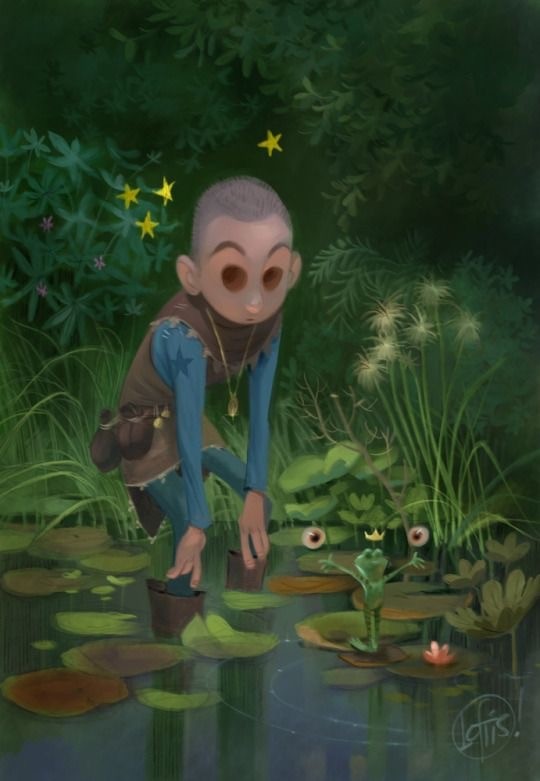 Thanks for the advice! Yeah, maybe I should rotate him a bit, but I feel like the contrasting shadow on the back of the frog is important to add interest and stop him from being bland.

Come to think of it, the eyes readability could be better too. The detailed shadows around the lillypads are kind of distracting from the eyeball on the right, and the left eye is halfway through the boot which is kind of confusing. Anyway, Thanks a ton for the feedback I really appreciate it, but in this case this is one of those projects I’ve been working on so long I’m quite happy to wrap up. Maybe I can go back and re-work/touch it up later once I’m less sick of working on it.

I totally get it. You should still be plenty proud of the work you’ve done, and you’ve certainly captured the whimsical essence of the original piece. It really is fantastic work.

It really resembles the original art wonderful. Angle is a bit different, the WIP does show the better angle. Still amazing job! Perhaps you should add the original art to the first post. Will add the extra touch of how well you did the executing, at least to me it does.

I think 'Weird" but cool