Yet another Christmas contest entry… I am pretty much done, and will be doing final touches in Photoshop tomorrow. Anything jump out as wrong/confusing?

I sculpted the dog, retopoed, and made a toon texture for him. The rest is freestyle internal with toon, and some compositing. 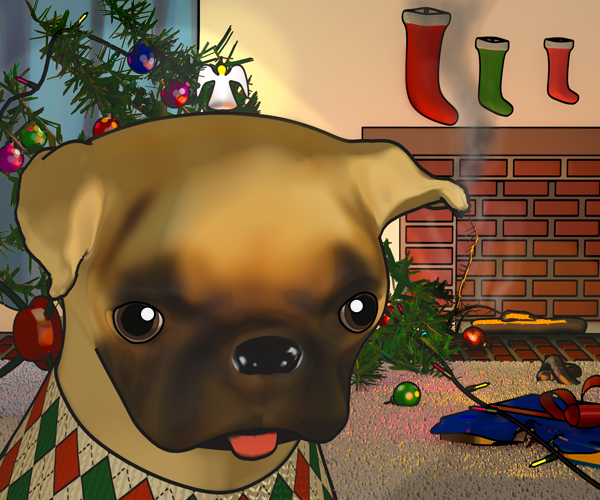 You asked so here goes…

The stockings and chimney need shadows to make em pop. The brick on the bottom of the fireplace looks good, make the ones in the back of the chimney look like that. I feel like the bump on the carpet is too much for this style, tone it down a hair or actually make it fuzzy. Maybe a little drool / wetness on his tongue or mouth area? Tear up some paper around the wrecked present. My dogs shred things to tiny bits. Also the light spots on the eyes look better when they are on the same side imho. Right now it gives a crosseyed feel.

It’s a fun idea and orginal. One of the things that I feel is extremely important in contests like these are the storytelling and originality. Photorealistic table top dining settings and outdoor environments are cool no doubt, but boring. Bonus points for telling a story here!

Thanks. I will go over and make the changes you recommended. The scene is getting too much for my computer to render. On it’s own it would be fine, but freestyle doesn’t like the high particle numbers on the tree, event though that renderlayer isn’t using freestyle. So I actually had to render at a renderfarm. Most of what you suggested seems about right, and I wouldn’t have thought of it.

I made all the changes except for the bricks, still on the list. I made a bunch of other little tweaks and am experimenting with a vignette. Anybody have anything to say, good or bad? The smoke is looking quite strange there…

It doesn’t look quite right, I’m going to work on it some.

I am not being facetious here, but did you realize that the tree was knocked over and the top had burned? I am not kidding, there is a lot going on and maybe I need to make it clearer.

– in addition to making better smoke.

there is a lot going on and maybe I need to make it clearer.

I kind of agree, to me it was obvious the dog caused a mess of the tree, but I did not equate the tree burning at first glance… I wonder if you need the whole tree fire thing going on at all. Maybe a cute dog feeling guilty… or sitting there chomping on some gift box might get the same point across in a different way.

The technical aspects with freestyle and the modeling look great, like you said, maybe just needs to be a little clearer.

Ok, thanks Harley, it isn’t as obvious as I thought. Hmmm. I may rethink the smoke. I might need to go one way or the other on it. Make it super obvious, or just 86 it.