The Hare and the Tortoise

This is my entry for the 3dvf french website contest about La Fontaine tales. I choosed to illustrate this one :

The Hare and the Tortoise
Rushing is useless; one has to leave on time. To such
Truth witness is given by the Tortoise and the Hare.
“Let’s make a bet,” the former once said, “that you won’t touch
That line as soon as I.” “As soon? Are you all there,
Neighbor?” said the rapid beast.
“You need a purge: four grains at least
Of hellebore, you’re now so far gone.”
“All there or not, the bet’s still on.”
So it was done; the wagers of the two
Were placed at the finish, in view.
It doesn’t matter what was down at stake,
Nor who was the judge that they got.
Our Hare had, at most, four steps or so to take.
I mean the kind he takes when, on the verge of being caught,
He outruns dogs sent to the calends for their pains,
Making them run all over the plains.
Having, I say, time to spare, sleep, browse around,
Listen to where the wind was bound,
He let the Tortoise leave the starting place
In stately steps, wide-spaced.
Straining, she commenced the race:
Going slow was how she made haste.
He, meanwhile, thought such a win derogatory,
Judged the bet to be devoid of glory,
Believed his honor was all based
On leaving late. He browsed, lolled like a king,
Amused himself with everything
But the bet. When at last he took a look,
Saw that she’d almost arrived at the end of the course,
He shot off like a bolt. But all of the leaps he took
Were in vain; the Tortoise was first perforce.
“Well, now!” she cried out to him. “Was I wrong?
What good is all your speed to you?
The winner is me! And how would you do
If you also carried a house along?”

I like it, very nice scene, especially the poet is very well done and the textures are pretty good.
Thing I don’t like is the modeling of the tortoise and the rabbit, they just look wierd.

And the poet doesn’t seem to be casting a shadow on the ground.

For the animals I was aiming for cartoony look, sorry you don’t like them :o.

The Poet does cast a shadow on the ground but the hemi light is responsible of the attenuation of shadows in the overall scene.

Haham, very nice. I think the plane is blurring into the sky too fast.
How did you made the little rubble on the ground?

Haham, very nice. I think the plane is blurring into the sky too fast.
How did you made the little rubble on the ground?

Thx Leichim, yes I know for the ground but I didn’t have enough time before the contest deadline to add more plants or trees in the background. The scene is really huge, about 2 740 000 vertices.

For the little rubble, I took a cube with some fractal subdivision and duplicated it hundreds of times.

Love the scene, good modeling on the poet too. The lighting needs a bit more work though. The left side of the image receives the most of the light (and therefore has better shadows), the right side however is too difusse (even the turtle seems to be floating).
So if right gets the same amount of light and shadow as left, you have yourself a lovely work.

That’s got a really neat “vivid” feel to it. The only thing that throws me is the vertical appearance of the grass [plant] at the right.

I like the concept, and the modeling and texturing is pretty good. I don’t like the composition of the scene, it could be improved. It seems right now like you tried cramming too many objects in one small area. Maybe a longer view with the animals a little further away from the poet would be more believable. Also, the small handful of corn stalks is a bit out of place, as usually they are found in large, dense feilds.

There’s a few small mistakes on the poet. The first phalanges of his hands are too long compared to the rest of the finger, and the pose of the hand on his chin is awkward. The index finger would more likely be wrapping around his chin, not hanging off of it. His face also has a rather strong crease from the corner of his mouth to his cheakbone, but then he seams to have rather flabby jowels…It’s an awkward combination if you ask me. Also, the arch in his boots comes up way too high. His foot would not have room to fit in there. And perhaps the poet would have more personality if his eyes were tracking the animals as he contemplated his poem?

The lighting could be more dramatic. The shadows are there but they are very subtle. When I first looked at it, it looked as though the poet and the animals were floating in mid-air!

Your off to a great start, just improve some things and you could be looking at a gallery peice!

modelling and texturing are quite decent. I like it. Althought, the bad lighting and lack of good shadow ruin this image for me.

But yeah, with a better lighting, this would be very great!

This is very good! I really like how the poet came out. Great expression there.

I think more contrast and shadows could suit this piece. I’ve enclosed an example below that I hope can be helpful. It shows how this scene might look after some Blender tweaks, if you were possibly to use a lamp with stronger/sharper shadowing and/or do some RGB curve tightening in the render nodes.

Also, there’s the faintest touch of simulated motion blur on the bunny in the example, and some slight simulated DOF/softening to see if any of that could possibly add anything or not to what you had in mind.

Congratulations on your project, and keep up the good work! 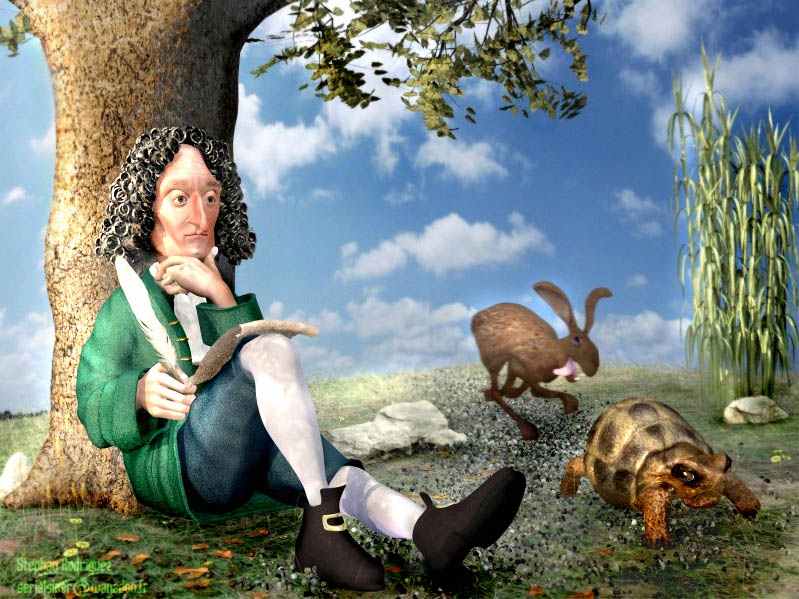 I like this piece; the modelling on the poet is well done. It’s slightly stylized and looks great. The turtle’s texture, especially the shell, is very nice.

As others have commented, I think the lighting and especially shadows could be improved.

He’s sitting under a tree, and the sun is fairly high in the sky (judging by the light) so there’s the potential for some very interesting light and shadow on the ground below (leaves cast great shadows). If you’re looking for shadows only in particular areas, some small lamps set to ‘shadow only’ are great for adding extra shadow detail.

You could also run this through the Compositor to increase the saturation slightly, and make the image a little more contrasted and vibrant.

Nice render but i think it would look better if you just cut out the tortoise and hare.

Thank you for the comments and good crits, I’ve worked again on the picture and managed to render a separate AO pass that I’ve combined with the original pic into Gimp.