This is my entry for the Blender Guru Steampunk Competition. It was a pleasure to participate and to have the support from all the fine Blender Artists that helped me during the creation of this image with their insightful thoughts, suggestions and encouragement.

Thanks to all of you. This image would not be what it is without you, guys! 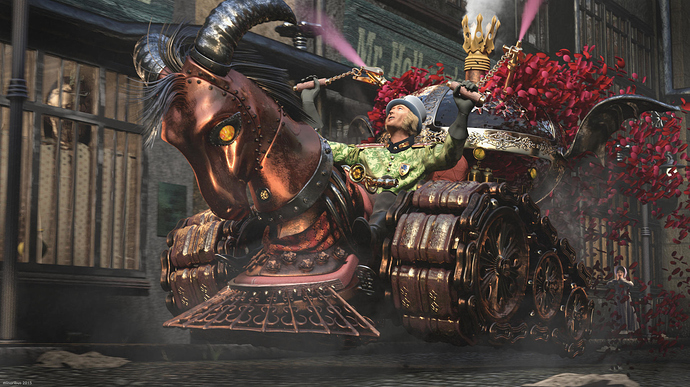 Mr. Scent, whom you see here on his daily service, is a municipal officer in the city of Boombury. Boombury is a booming and prospering city. Over the last two decades municipal authorities were able to attract plenty of heavy industry companies. Unfortunately there is a little problem with the smelling byproducts of that industry now. And people started to call their town Boobury.

This new name got around fast. And the mayor, Mr. John Wealth at that time, realized that all of a sudden the taxes went down. He didn’t welcome that, as we know today. After some restless and sleepless nights he created the BMSO squad, the unit of the Boombury Municipal Scent Officers.

“They shall spread the scent of prosperity”, Mr. Wealth said. And he provided them with everything they need to bring a fresh and lovely flavor back to the plagued citizens.

The citizens for their part welcomed the new service. They were grateful, how well and prosper the city smelt. “Look!”, they used to say, and some of them also said “Smell!”. “Don’t we have an ingenious, thoughtful, and caring mayor?” And shortly after that a new salutation was adopted by the upper classes. “Have a lovely smell today!” And the correct answer to that was “And may all your day be full of blossoms.”

The Scentmen became well known and respected civil servants. Although - there are absurd rumors lately. People whisper that some of them make a little extra money and stay away from boroughs where the inhabitants refused to pay an unofficial bad smell protection fee. But that’s surely only rumor.

At least we know that our Mr. Scent is an upright BMSO man of the first hour. He lives for the scent of the city and he loves his fragrant duty.

- in order of appearance:

Besides that I really enjoyed the discussion among the competitors. Although we are competitors we are all blenderheads, aren’t we

Thanks a lot again!

Best of luck to all who participate in this competition! 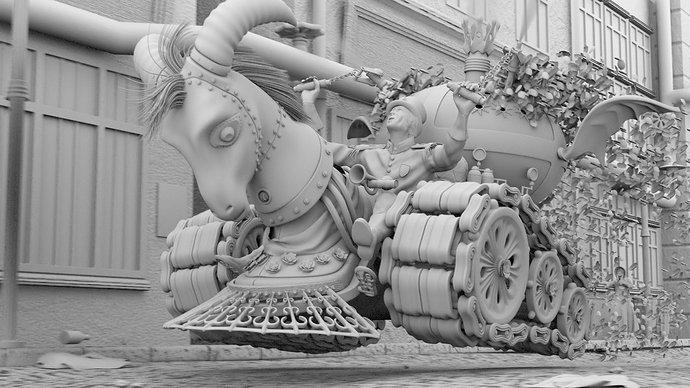 Congrats minoribus a really wonderful image that you have produced here, as I said before I hope it will take you all the way.

I was a little worried about what happened to you when I did not see anything posted yet, but then I saw your post in the WIP thread and I was happy to know all was going well.

Glad the hair rendered for you.

PS, do not think I have forgotten about AVA, now that you are done here do not think that it will be time for you to rest.

Great piece minoribus! I really enjoyed the story too.

It came out really excellent minoribus. Happy to see you stuck with your larger than life theme, the one you started with. I especially like your final materials, the dark bronze on the horse did it. Congrats.

You used great creativity on this project, and as usual took it to a great place with outstanding execution. I’m glad you were able to recapture the hair on the final render.

Terrific entry, minoribus! I thoroughly enjoyed the story you’ve given to the image, as well. I feel that makes the image even more interesting. And “master of VFX”; you’re too kind!

Congratulations on a job well done.

Congratulations on a stunning piece of work

Yet another lovely render to add to you’re portfolio. I wish he could come round and spray my street, the neighboors cooking smells awfull! lol.

Thankyou for the kind words about my telecalculograph

And i appreciated the help you gave me along the way.

Best of luck my freind!

Still no word as of 8:40 P.M. in the Eastern U.S (Thursday). Which is good in away. It means a real juried art show. And, once again I would hate to be a judge from what I saw on the forum here. Just some amazing renders.

‘The wise man’. minoribus, I need to take a plane, go into training for several years (Much like ‘Rocky’ in Russia) and kick your ass. The wise man, indeed.

But, it was a fun WIP. And, many times I was offering suggestions it would have taken me a week to pull off in Cycles if ever. And, ‘if ever’ should be underlined and in italics.

I think this whole Internet thing is still pretty amazing. Here I was offering suggestions to an artist in Germany and another in South Africa. Different times zones, cultures, and probably sense of humor. And, both more talented then I am in 3d graphics. You have to admit it’s humorous. Even your parents sent letters and waited days for an answer. Yeah, both were fun WIPs.

Thanks to all of you for your kind words, guys! I’m glad you like it and good luck to all of you, who participate in the contest also. And I agree, this time there are so many amazing artworks in the competition when you switch through the entries at BlenderGuru. And I’m sure the judges will have a hard time

@Ghost, I know what you mean, man. I’m old enough to grew up without the Internet at all and today I would feel totally cut off from the world if it would not exist. And besides the fact that working with Blender means fun to me it doubles the fun to be able to discuss and share and learn here on BA! 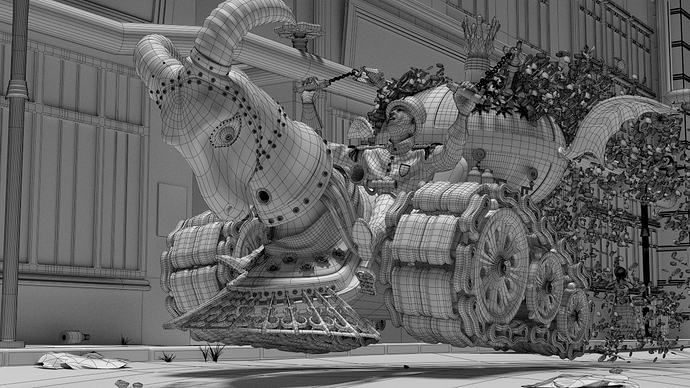 A quick stopping here just to saying “what the beautiful and complex scene” Minoribus!

CC what’s happening. minoribus, I have reviewed the entries and my top three finalist are… But, then I’m biased somewhat. (As is every judge who has juried a art show) With my love of saturated colors and contrast. But, really they are some fine pieces entered aren’t they. And, it would be no surprise if two of my picks don’t make it. As always your wireframe has blown me away.

Speaking of the Net have you noticed CCs Location: As if I needed a reminder tonight.

Gotta love this render and the story that goes with it! Keep it up!!!

Congratulations to all the finalists, a really nice and inspiring collection of artwork has made it into the last round! Who will make the top place, is the thrilling question now. Still hard to decide.

And special thanks to all who gave their feedback and shared the thrill with me during the last days, especially CC, Ghost and SynaGl0w. Very much appreciated.

Thank you very much, Fred

Lot’s of detail, care and hard work on this one. Loving the backstory and all too! Congrats!