The King's 9001, a form-follows-function sci-fi spacecraft.

Spent a few weeks with blender and completed my first model.

The spacecraft construction, in a nutshell, is that it’s built from various ellipsoidal modules (reactors, thrusters, weapons, fuel stores, etc), joined together and embedded in a “matrix” to create the complete craft. I thus took the same approach modelling it in Blender, creating the individual modules and then placing these around the surface of a cuboid. (Obviously I only need to worry about those that are visible on the outside).

The matrix is a near-black, roughened with a stucci texture. (It ought to be an almost perfect black, or alternatively an almost perfect retroreflector, but I think the former would look poor and the latter I don’t know how to do.) For the modules, I went with a gold material off http://matrep.parastudios.de/ ; this individual spacecraft (who has a strong AI “mind”) happens to be the head of government of a country, so I thought I’d bling him up a bit. The background is a Celestia screenshot.

In terms of scale, the long axis of the modules is 100 metres, and the whole craft’s 1100 metres long. Working at 1 blender unit = 1 km (maybe a poor choice of scale, but I have some much larger craft I want to model too). I did think about finding a basic model of the real-world Space Shuttle and putting it in for scale, but didn’t get round to it.

It’s not really finished, I’ve done the major modules (weapons and thrusters basically), but there should be a fair amount of smaller stuff about. And I know I have some shading glitches. 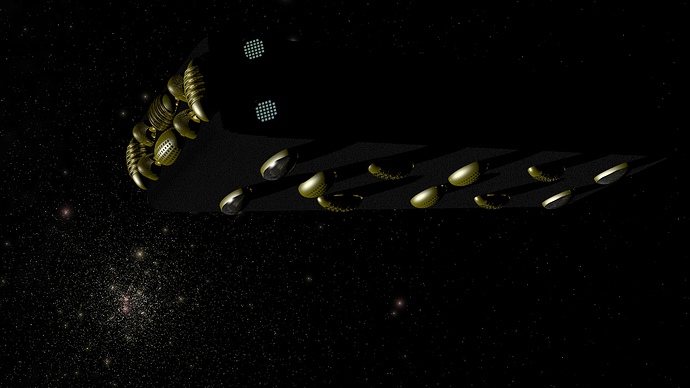 Hey there, cantab. Interesting idea. I’d be interested in seeing a shot where more of the ship can be seen. As it stands, so little stands out from the background that it’s really hard to tell what’s ship and what’s space. (Granted, that may be the idea for the final project, but it’s hard to appreciate the modeling work when you can’t see it.) Looking forward to seeing more!