As I wait for Cycles hair development to stabilize so that I can finally get in and finish my tutorial series on hair in Blender, I’ve been working on a couple of other projects as well.

So, I’ve been sitting on this character for a while to see if it was actually going to go anywhere before I decided to WIP it. I really like how it’s progressed, so I’ll keep posted up here on my progress.

It started as a project to practice creating a full 3D character based only on a single, side-view concept sketch.

This was the first quick sketch, took about 5 minutes, and I really hated it right off of the bat. 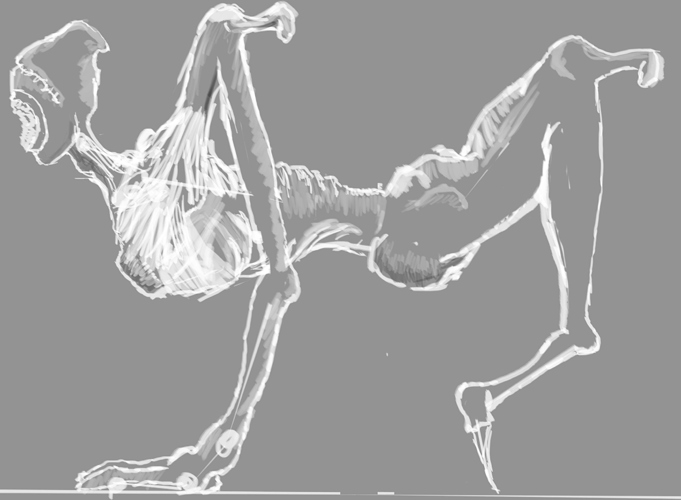 I did a test skin to see if I would like it better in 3D, and I decided quickly to scrap it. It had a feel that I liked, but wasn’t thought-out enough. So I did about 20 more quick sketches and wound up with this. 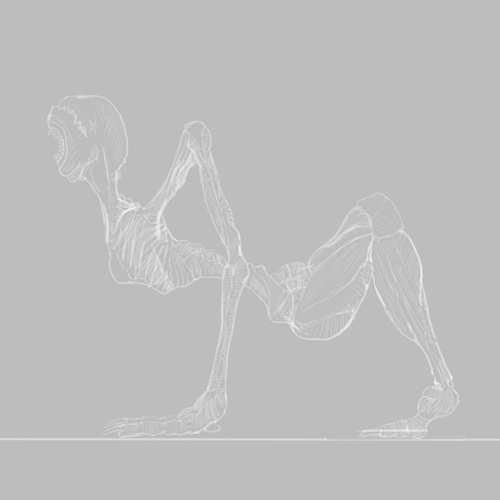 I had mostly worked out what I liked and didn’t like at this point, so I went ahead and did a quick block model and rig to see if it could move plausibly in 3D space. You can play around with this rig in this blend file.

After realizing that it moved well in 3D (and looked especially creepy, to boot) I started modeling. I started with the AMAZINGLY helpful Skin Modifier in Blender… 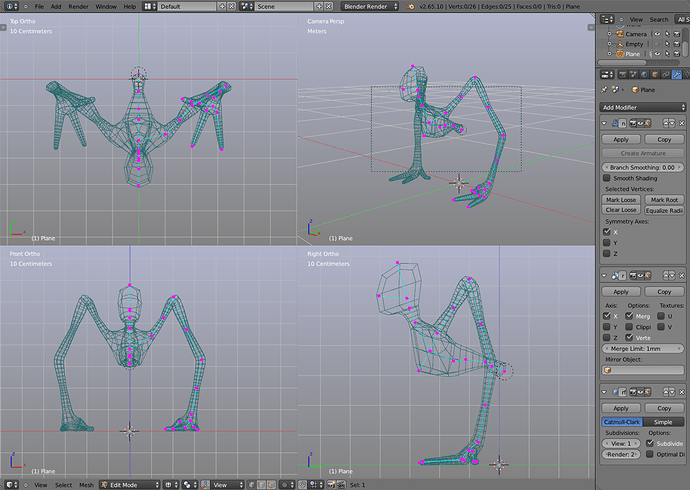 …and worked out a basic “skeleton” on which I could do a preliminary sculpt. 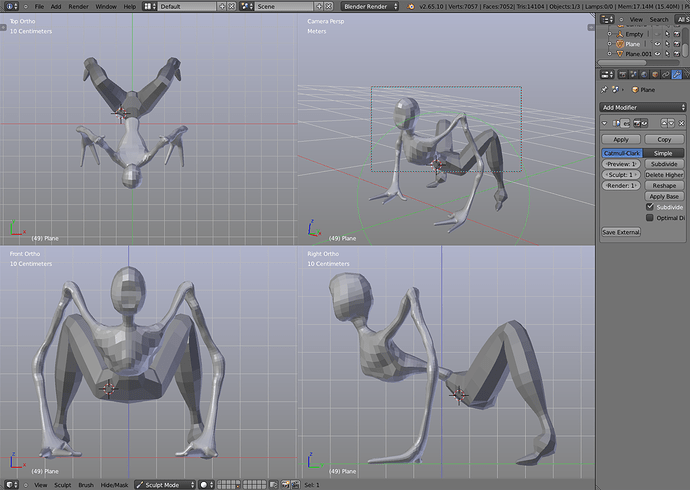 Then I did a very basic sculpt on the base, giving really simple muscle flow and blocking out the main “landmarks” on the topology. 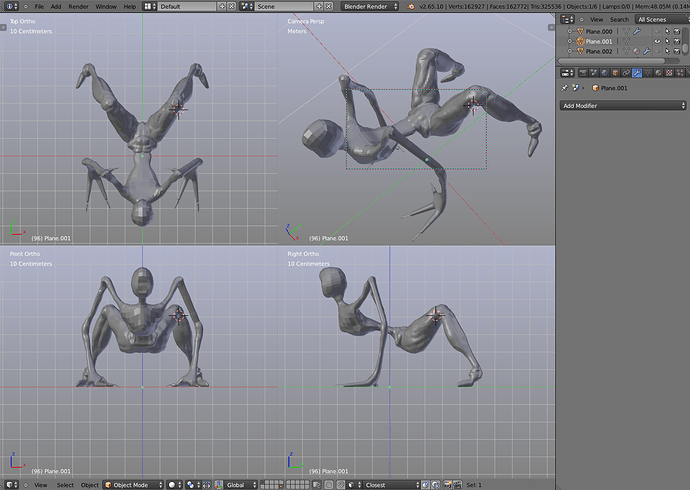 Then I started my retopology, which has been by far the longest step so far. Those legs were a b**** to figure out in a logical way that wouldn’t be a nightmare to skin and animate, but I think I finally got there. 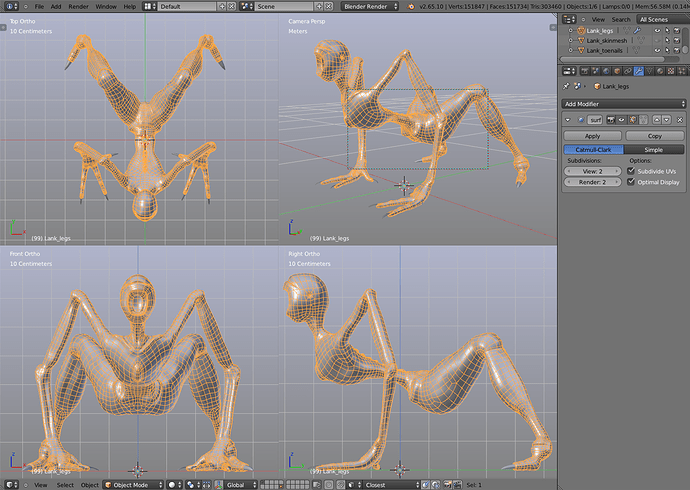 great stuff! hey if you haven’t already seen it, check out the movie ‘pans labyrinth’. it has a really ghastly creature in one scene.

I finally had a good mesh to start truly sculpting on. 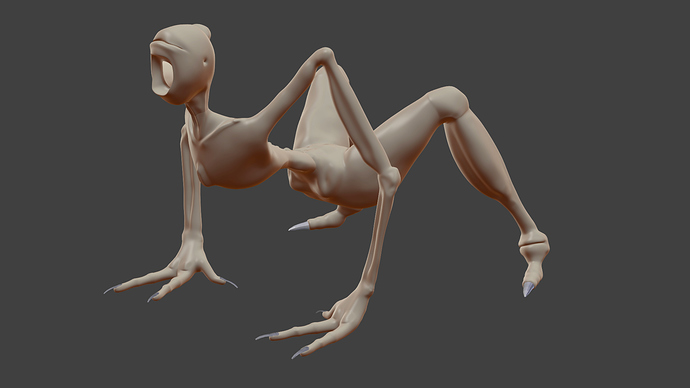 Next, I jumped into ZBrush. Sorry, Blender sculpt tools, I just don’t feel like you’re there yet, and years of muscle memory and custom setups and tools keep me going back to Pixologic. As much as I love Dyntopo, I didn’t feel like I had the control in Blender that I do in ZB. So, I began sculpting. And ended up here. I like where it is for the end of a first sculpting pass.

It’s pretty close to the concept too.

Next I’ll be going in and doing a second level sculpt for some smaller details, and eventually a pore-level sculpt to extract a bump/normal map. Eventually that mouth will be filled with a kind of hinged, lamprey-like tooth setup which it kind of hard to explain. I still have a lot of work ahead of me, but I’m digging the character so far and can’t wait to see it in motion. My final plan it to integrate it into some real-world footage using the Blender motion tracking tools and possibly use it in a horror short film. Now, back to work!

EDIT: When it finishes uploading, you’ll be able to find a short timelapse of my sculpting here. I wish I had recorded more. I’ll be recording the rest of my work from here on out, though, and uploading it as I go!

I love Pan’s Labyrinth, it’s one of my favorite fantasy movies ever made and the characters and effects are mindblowing. I’ll assume you’re referring to the “Pale Man” scene? In fact, I had reference images of both Doug Jones (the gentleman who played him) and Javier Botet (an absolute MUST for anyone interested in abnormal body shapes. He was wildly helpful for the hands.) pulled up the entire time I was modeling.

Nearing final sculpt of the head. Haven’t had a ton of time today to work on this. Not sure if head/body/legs will remain separate pieces (that’s how I’ve been sculpting for extra resolution) or if they’ll be joined and rebaked at the end. Either way, the nasty seam on the neck will be covered with a shackle on the final model, so I’m not worried about it. Obviously no materials/textures yet, I still need to do some look dev and decide what it’s going to look like in the end. Also, ZB crashed towards the end of this sculpt and I lost my recording of my head sculpting. Sorry everyone. I’ll hopefully have one to show for the torso though.

There’s still some sculpting left to do, but I’m doing to hold off on it until I’m sure how close I’m going to need to get to the character. The rig is mostly usable for simple poses at this point, the hip area needs some more grunt work though. After I get the skinning sorted out I’ll create a pose sheet and post the results. I also plan on working on the inside of the mouth today. Can’t wait to get into look-dev and materials. Not sure if I’ll be using BI or Cycles yet. Man, I wish Cycles had SSS… 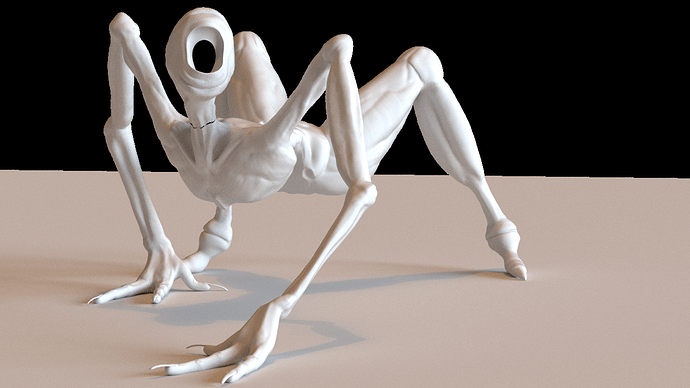 The model begins to take shape and it’s ugly as hell already.I can not wait to see the final result but i must.Good job and good luck!:yes:

One more, just because I’m having too much fun moving it around 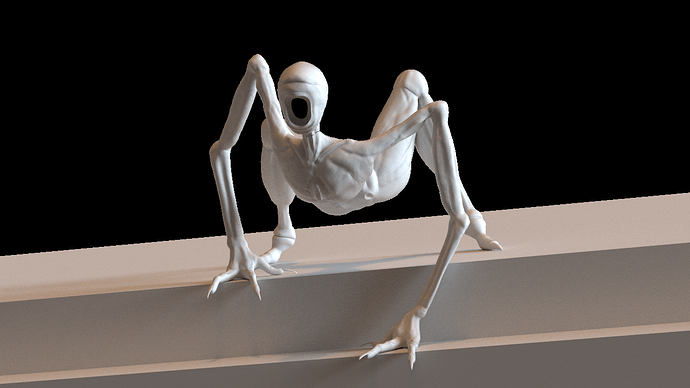 Looking really nice, man. Yeah I guess that is what it was called, the thing with detachable eyeballs in his hands. The little girl probably should have swiped those eyeballs when they were on the table, he would have been far less dangerous.

Thanks for the encouragement!

Took a break to watch the Sony conference (Quantic Dream’s Screen Space SSS is mindblowing) but now I’m back to work.

Got the eye’s all sutured up, added the inside of the mouth. Next, shackles, teeth, some more sculpting, and who knows what else. 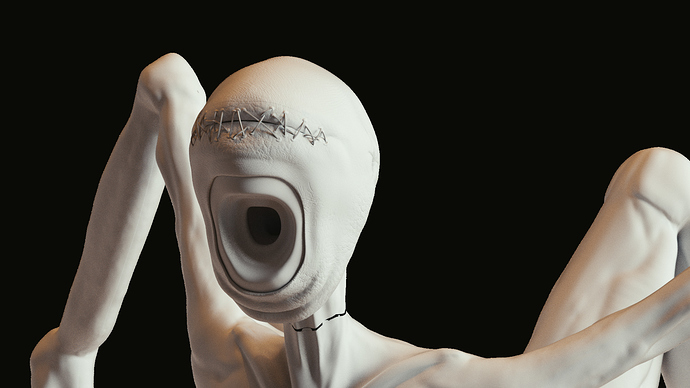 Just wanted to say that I love this thing. “Beautifully grotesque” is the phrase I use for these sorts of creations, due to my fascination with them ever since my first play-through of Silent Hill.

Edited for the unintentional redundancy. Thumbs up for zbrush. I like it too.

It should probably come as no surprise that Silent Hill is one of my favorite franchises in video game history ;). SH2 (the game) is my pinnacle of horror storytelling.

Wouldn’t want to meet this creature in a dark hallway!