I never post any of my finished artwork on here. But here it is. I modeled a tree in Blender and the floating ground with the randomly generated stars and some spheres for the shooting stars. Then went in and painted some in my first attempt with digital paint using MyPaint.

This piece was done for my Ai Color Theory project. We drew three random pieces of paper and had to design a piece surrounding it exploring Goethe’s Color Proportion Theory and Value. The three themes I drew were Star Wars, Tree, and Green. So I played on the words a bit and regardless of how big of a star wars fan I am, I stayed away from the traditional movie. The story is that this is the last tree in the universe and the shooting stars are actually warring with each other over the tree. They are made up of various complements of green.

Well here is the piece. I hope you like it. Personally, it’s hanging on my wall. C&C please. 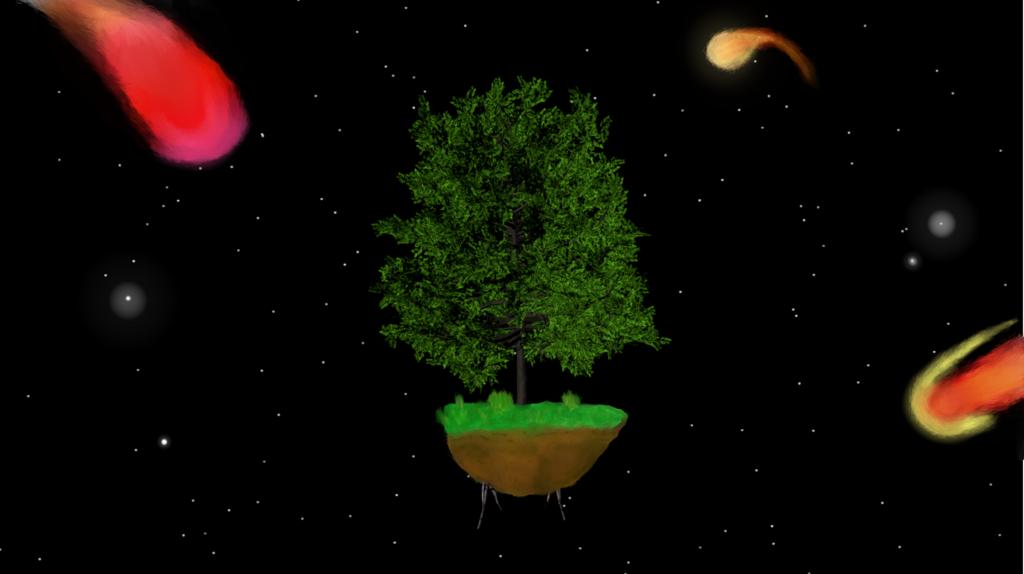 Interesting idea/concept but if you were going for realism much needs to be worked on (the background, the tree, the materials, the textures, and lighting). The scene mainly feels to flat, there is not depth. The tree looks fake and the ground materials are wrong. The grass dose not look real. The ground needs a better texture. As for the background, you have the concept but the execution was not very good. Galaxies do not look like that in the middle of outer-space. Try experimenting with different textures and particle systems to create a good effect. Also, the star settings you used in blender do not look good, there should be many more smaller stars. Sorry if I was to harsh but this is what this came across to me as. Good luck on your next project and keep blending!

Well I technically don’t have a texture on the ground. That was digital paint. And I am not trying to show galaxies in the backgrounds, just stars, and I admit I could have more.

Personally, I see it as an excellent piece of artwork and I wouldn’t do anything, really, to change it.

The colored objects on three sides, which seem to be approaching it, are not only a pleasing color-balance but also (in an “okay” way) slightly suggestive of spermatozoa. So there is a sort of “unspoken sexual reference” that is suggested there, without being profane. Even if you consider them only as colored objects, they give a balance to an elegantly-simple scene.

The objects are well-spaced not only in the 2D geometry of the camera viewport, but in 3D space. The same appears to be true of the very small handful of “stars.”

All in all, to me, very pleasing.