After having done some tinkering with the BGE, I decided to start my first Blender project and this is the result. It was such a joy to create something in Blender, at the start I only knew a bit about mesh modelling but discovered more and more things during the process of making the image. Until now I have worked on it for about 6 days and even though I am not completely satisfied with the result I call it done, because the scene ended up very resource inefficient and the renders took too long to do any more polishing.

Well, anyway, I just want to say thank you. Blender itself and this whole community are just awesome. (Special thanks to KAHR-Alpha and Xard for helping me with the nasty buffer overflow) I can’t do much (yet) to give anything back except releasing this image under a CC-BY license (though I doubt that it could be useful for anyone). Hope you like it. 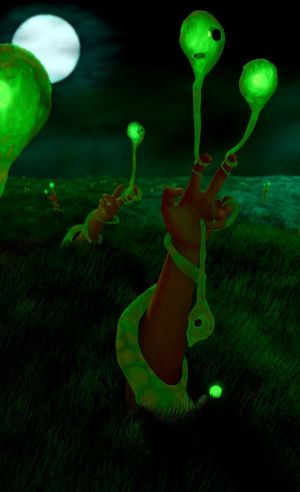 EDIT: I wasn’t very satisfied with the editing in GIMP, so I made some changes and reuploaded a new version + small image.

Woah! That is SO neat! I love it! Awesome work

Woah! That is SO neat! I love it! Awesome work

What more could I say? Definiteley love that image, too. Those colours are gorgeous!

Mmmh… erm… what the hell is this scary world?!?

Thx for all the comments, great that you like it.

Mmmh… erm… what the hell is this scary world?!?

It is very very loosely based on the novel “The Machine Stops” (hence the name). In the novel all humans are living inside of a giant machine that does everything for them. They only communicate through instant messaging and have become a shadow of themselves. The knowledge how to repair the machine is lost so it eventually collapses and all humans die. I wanted to capture that feeling of an ending era in this picture. The difference is that my “machine” is made up of parasite-plant-bulbs.

The humans die, the plants die too, and only the moon is left to observe it.

Very nice indeed.
The atnosphere is in a wonderful way magic & mysterious.

Your attention (weather this was conscious or not) to some often neglected aspects of creating stills is apparent in the first rate composition and color pallet of this very inspiring piece of visual art. Fantastic job.

Sorry for resurrecting this thread, but I have done some additional editing in GIMP and uploaded the new image. I am much more happy with it now.

BTW Thx for all the comments.