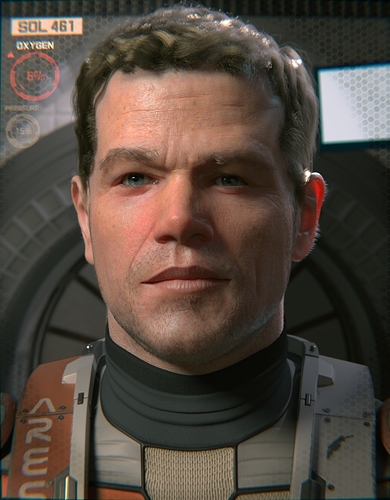 I’m working on this Matt Damon likeness and I’m at this stage where I can’t really decide whether the likeness is there or not (seem kinda ok to me but I’ve been working and looking at it for a while so it’s hard to not be biased) so I thought I’d try to get some impartial opinions before I move into skin details etc.
Comments and all kinds of critique are obviously welcome

That’s awesome! No textures and I can see a strong resemblance. Good job.

From my view it looks like Matt damon so no critique from me!

Looks really good. If I may ask a question did you use dyntopo? Could you give a short summary on your workflow?

It looks a lot of him! I think his head looks little bit too wide though.

Thank you for the encouraging feedback guys.

Safetyman
There is a chance to mess it up when adding textures. I’ll try not to

thefilosofer
Thank you, my friend!

Jstrauss
Sure. My workflow is still a bit messy but I’ll try to break it down.
I wrote a blog post since it got kinda long. See it here:
http://toshicg.tumblr.com/post/140487604405/likenesshead-sculpting-process

ArMan
I know what you mean. Actually in a previous version of the sculpt I had the jaw a little wider but then I changed it because it seemed narrower in some reference. I’ll look into this!
Referenes can be hard to judge… speaking of which both of these images are of Matt Damon. Mindblown! This is a cool project and as others said, the likeness is great. I knew immediately who it is. And thanks for the blog post. I didn’t expect that you’d retopo him at that early stage, but I understand why you did it.

Damon hasn’t got many distinctive features which makes it extra difficult.
You make it look easy. My 5 stars are waiting whe you finish it.

Amazing work so far, you got an eye for detail.

This is a very small detail but the neck looks like it is tapering down, you might want to straighten it up.

Im not sure if i made sense, but great work seriously!

Bravo! As others have stated, you’ve nailed the likeness with just a basic material. Strong foundations mean stronger texture and lighting down the road…

Looks really alike on this base sculpt.
great start!

minoribus
Thanks. Yes, retopo helped me construct some shapes early on, especially curved ones like eyes and mouth. I find this harder to get with sculpting tools but it’s probably just my preference.
sumac
He has an interesting nose but yeah, not much to grab onto. Many times while sculpting I was going, ‘Shit, looks like Brad Pitt… Schwarzenegger? How did I get that look?’ And I will not forget about your 5 stars haha
effinmeow
I know what you mean and the problem may still be there since I haven’t touched the neck that much but I’ll keep that in mind. Cheers!
paulchambers3D
Thanks, I’ll do my best with the later stages!
pieriko
Thanks man!

So here is an update. It looks a little closer to me (especially close to Damon in Elysium) but self-deception is always a possibility so I count on honest opinions.
I added the inside of the mouth and was surprised how flexible blender’s multires modifier is. Good stuff.
So unless people disagree I’ll “freeze” the likeness at this point and focus on adding the bigger wrinkles etc.
After that I’ll try to add the skin pore details. Already did some tests and again I’m impressed with how well blender handles this level of detail. CUDA went out of memory when I tried to render tho, so I guess I’ll be rendering on CPU. 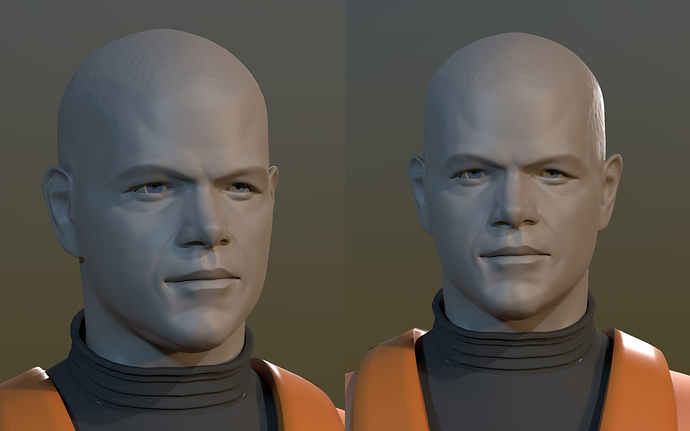 Looks exactly like him, and he doesn’t have textures yet! It’s going to be an amazing project! Keep it up! Are you planning on animating it after? Or making a scene? Keep up the good work!

Thanks Deadway. Facial animation is something I’m interested in but I’m not sure if I’ll do it on this model. To be honest I’m not certain the current topology is ideal for this.
I’m roughly following this plan:
-secondary facial details and skin pore details (in progress)
-skin shader and hair
-space suit redesign/modeling
-creating a final scene (got some ideas but no final concept)
-[optional] add facial expression if the final scene requires it.
-[optional] experiment with facial animation

TBH this really does look like him. im not even kidding. With some good textures they will never need to hire the real Matt Damon ever again.

Got a little update. I worked on the skin detail and some initial skin shader. I think I’m getting the hang of sss in cycles but I’m not yet sure what nodes the final shader will consist of. I also spent some time experimenting with baking textures and stuff and I think I have a workflow for the final render that is reasonable and gives me good control over the skin detail I want to display. So next thing to do is some textures. 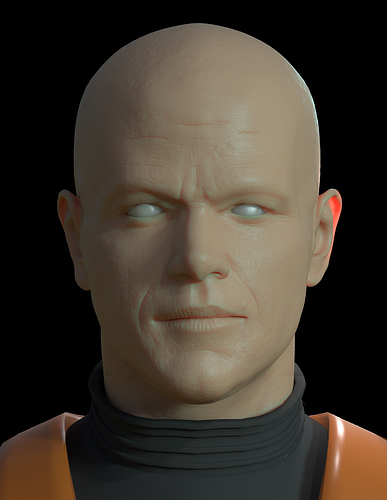 Here are some more sss tests and skin details.

This is a killer model. Please don’t ruin it with lighing like the guy that did Bruce Willis on youtube did. The model looked amazing during work and after that he just put a soft lamp on it and lost all skin detail making the face look like it was made of rubber…

Great job, it looks like the real matt damon !