I’m hoping this will become a long-term project that really works out - so if you like this sort of thing, then cheer me on!

The idea is to have a sporty jetpunk (like steampunk, but with jets) aircar in for a major overhaul at a backstreet mechanic’s shop, who has taken off for lunch. This leaves the car itself in the background, with the foreground and focus being on the jetcar engine supported on workhorses or perhaps a robot arm, the rolling work table next to it, and the whole scene clearly being a job half-way through, temporarily abandoned in favour of a cold brew and some limp cardboard sandwiches.

This is a clay render of the engine which will be in the middle of being serviced. 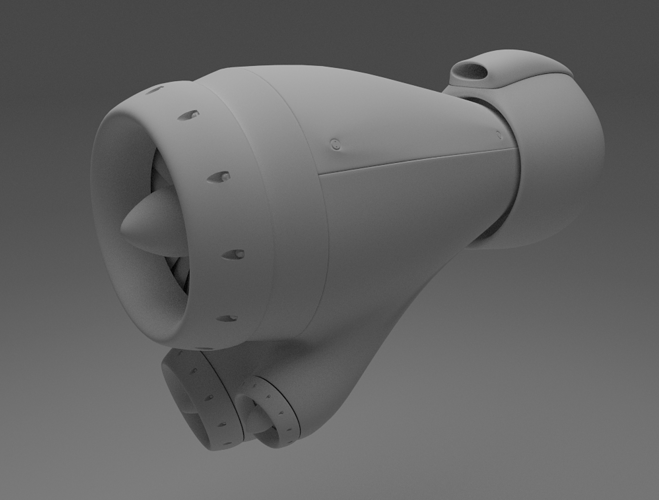 This is the jet engine itself. At the rear and still under construction, the afterburner assembly can be seen. 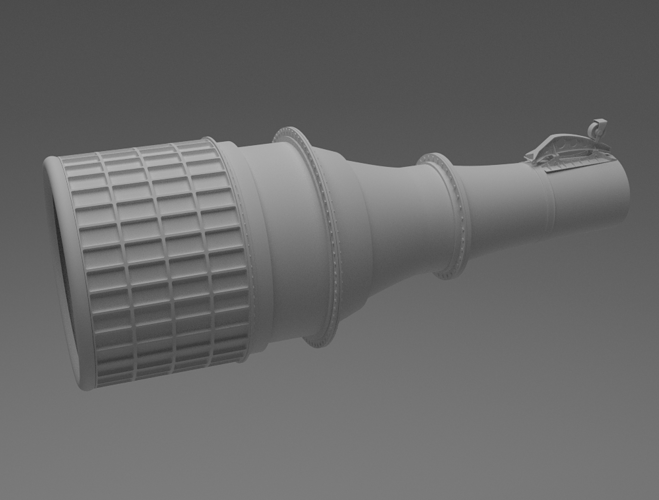 Front view. Since this is the sports version, not only does it come with afterburners, but it also has two independent mini-turbines, although I’m not certain what they are for. Is there anyone out there familiar with this model jetcar, and can they tell me what the two mini-turbines are for? 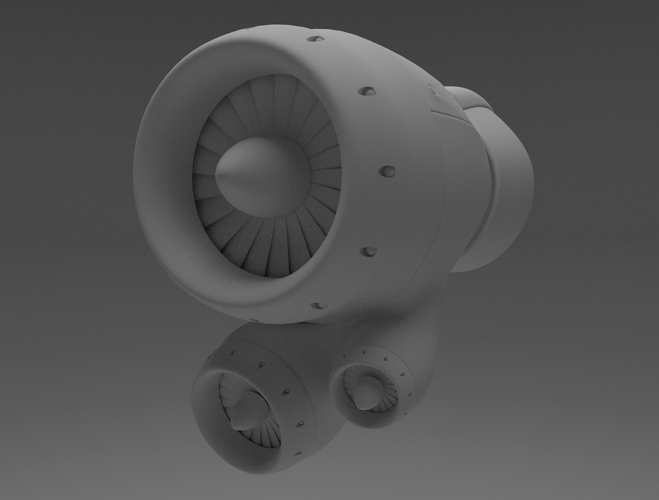 clean work. Keep it up.

Front view. Since this is the sports version, not only does it come with afterburners, but it also has two independent mini-turbines, although I’m not certain what they are for. Is there anyone out there familiar with this model jetcar, and can they tell me what the two mini-turbines are for?

BTW good work keep it up.

Thanks for your comments. I wonder of the smaller turbines are there to boost the afterburners somehow. It seems inprobable that they provide upwards thrust, since if I’m not mistaken they merge with the main turbine at some point, but perhaps I need to research this a little more.

A couple of shots of the completed afterburner assembly that controls the turkey feathers, and the cutouts in the cowlings. 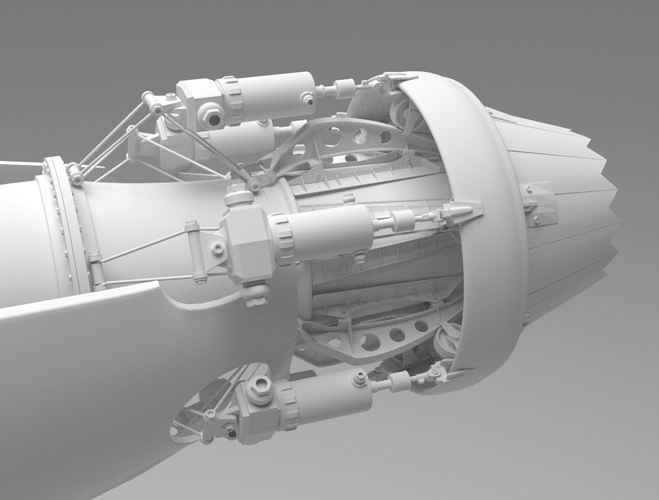 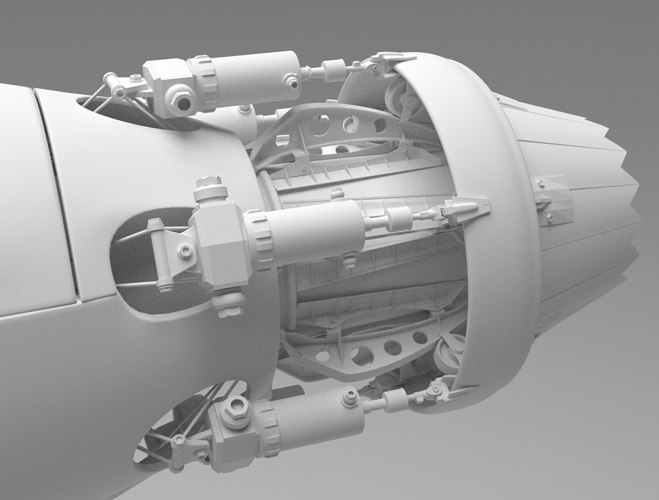 Would love to see some wires, the idea seems awesome and the models look great can not wait to see the progression!

I’ve dropped the cutouts in the cowlings because they were rather ugly and the whole business was becoming too complicated, what with the other bits and pieces that have yet to come.

The hydraulic system for the turkey feather actuators is almost complete (just the pumps have to be added) and the afterburner fuel/air feed system is around half way there, with the manifold and piping in place. 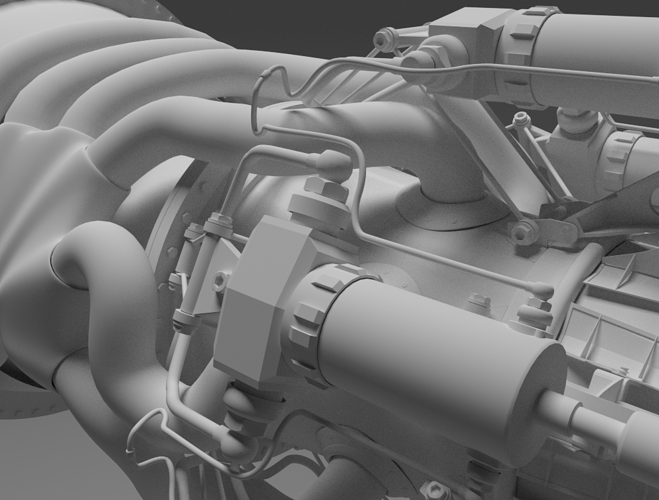 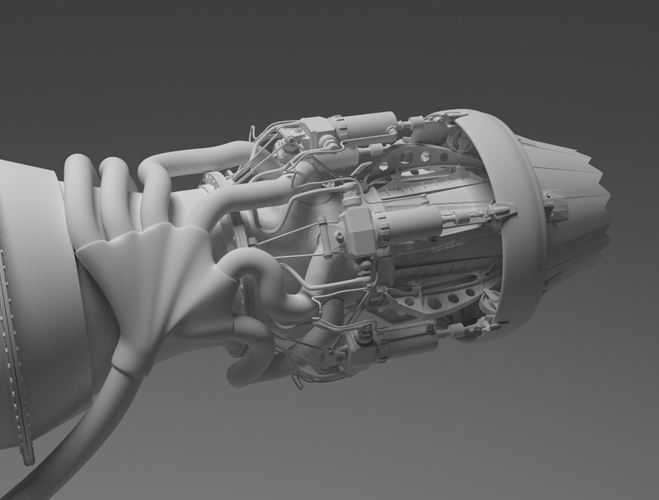 The thing that splits the large pipe into 6 other pipes looks a bit weird though.

I’m working from the back to the front for some unfathomable reason, consequently what is seen thus far represents less than a quarter - if that - of the detail work on the engine. I shudder to imagine what the texturing holds in store! Hopefully the finished engine will serve to entertain you, DCBloodHound.

That’s a detailed engine, I can’t imagine what the rest of it is going to be like. A few million polygons?

Looking good
Going to be nice to see it progress

GrandeP, I imagine that the finished model will have a polycount somewhere in the two million range. Since this is not something I plan to animate, the high polycount shouldn’t be a showstopper. Mind you, by the time this is finished, there will be GPUs out there with 8GB and several thousand stream processors, making this a two minute render

and hence animateable even with a kabillion polygons.

Hope this gives you some inspiration.

What a phenomenal link, DCBloodHound. Inspiration? Perspiration, more likely! Thanks so much for that. Exactly what I needed.

The afterburner fuel injection system is well on the way to completion, with the blower at the front still requiring some attention.

DCBloodHound, I have corrected the geometry in the afterburner fuel/air manifold (“The thing that splits the large pipe into 6 other pipes”) so it looks smoother now. 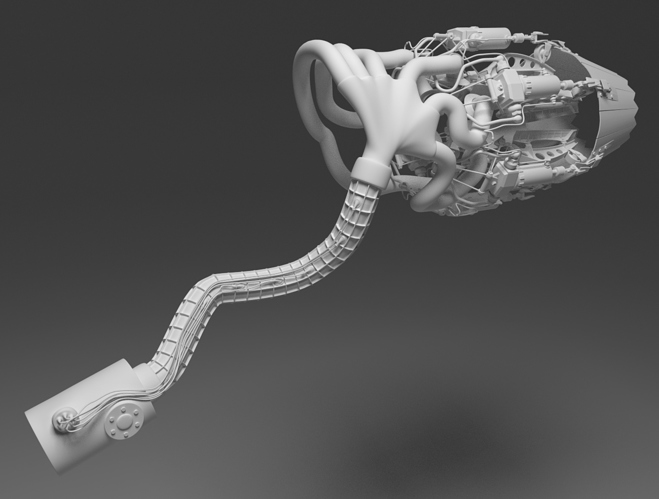 Afterburner fuel/air system is now practically complete, I believe. Some of the wires that are being worked by the mechanic on can be seen midway down the engine, which is why they are not attached to anything. 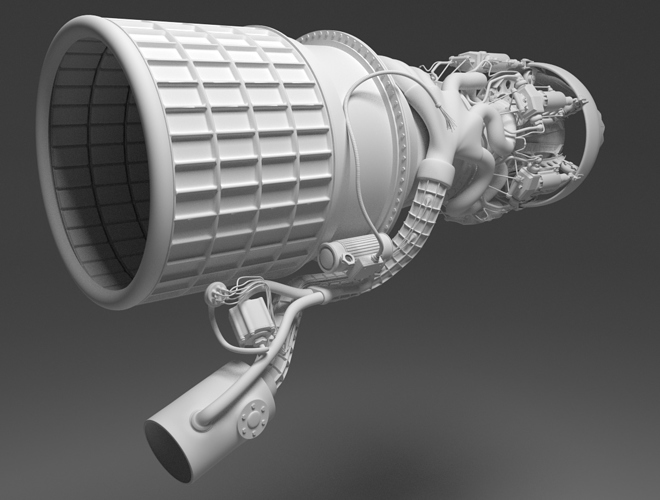 Now that’s intensive detail, love it. I also like the stylized simplicity of the first one.