I finally can post a graphical work of mine. Yay! …On the long term I plan to maybe make a short movie out of it, but my time is limited, so I am not sure, if or when this will happen.

But here is a first shot.

I’d aprecciate your advices and critics, as I am still learning. I am not that satisfied with some things myself, but all in all it works for me and furthermore I don’t want to anticipate your critics, so that I keep these to myself.

fyi: Rendered in cycles 300 samples. Frog textures and most plants are made with masks I created with gimp, some plants have photographical textures I edited (also with gimp). 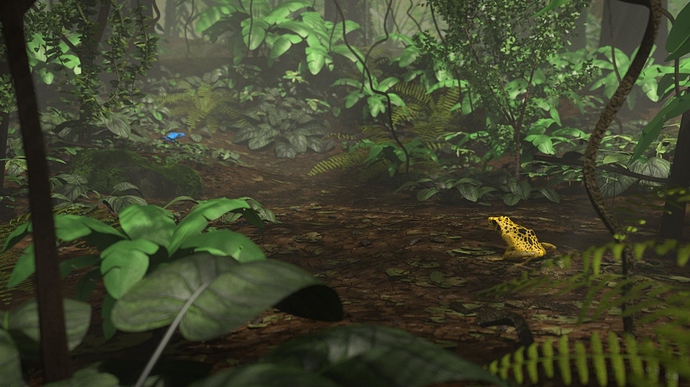 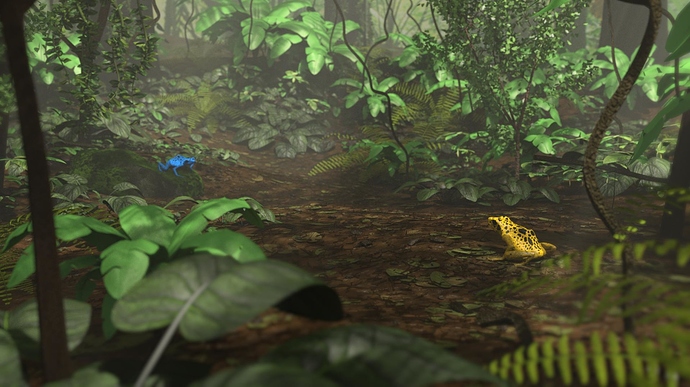 Nice!
I would change the position of the blue frog so that its closer, right below the green plant that I think is called fern

You’re right. The blue one is not that well positioned. That is a consequence of my earlier attempts to animate the scene. (Blue frog crawled from the left into the shot - i just used the endposition of its motion for further developement of the scene itself. That does not work that well as still.)

So maybe I should set him a little to the right for the picture. But I don’t want to bring him nearer to the cam anyhow, as I want to preserve the spatial set-up on the whole for the animated short I am planning to develop from this. But maybe I should do so for the image.

What I am not sure about is, which plant you mean in particular, as most of them are green and the frog is currently sitting below that one I consider to be a fern.

for short: I guess I will try placing him between the fern he is currently sitting below and the plant with the big leaves right of the fern. There is a little “hole” anyhow, which could be filled by that and it should fit better with the rule of thirds.

Furthermore I would like to have the defocus of the foreground-plants higher than that of the background. Is there a simple way to achieve that? (for “splitting” the defocus my only idea is to make two renders with different defocus-setups and then blend them into another at the focus-level, but I am assuming that there is a simpler way to do that, by compositing-nodes…(?))

Yes, I figured it had something to do with animation. But cant you just render another frame?
Increasing foreground defocus is above my level. But I have been thinking about tilt-shift, used in photography to correct angles and focus along another axis. A quick search brought up the link below, maybe useful?

Thanks again, also for the link! I could have thought of that technique and will try it out.

Edited the position and stance of the blue frog, blurred the foreground and pushed the exposure a bit.