The Parking lot
My first animated short film in 2015

Hope you like it.
I worked something like 2 weeks on it. Excl. Approximately 6100 min render time in Cycles.
The Smoke I still used the internal render.
The final credits are parts rendered with Cycles, internal render and Freestyle
Happy about criticism and suggestions.
Would be happy if you subscribe on Youtube, Facebook and / or Twitter.
Website and new projects are coming soon! 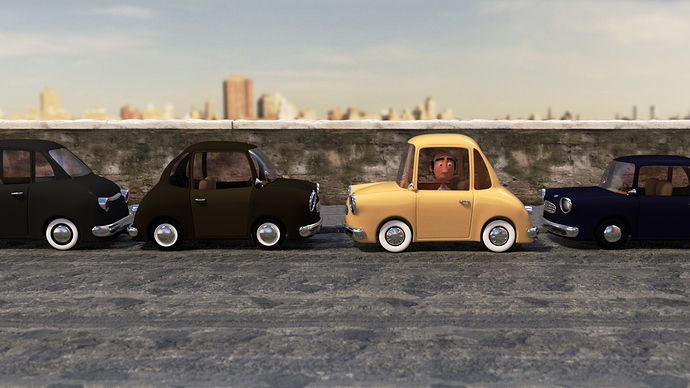 I could feel his frustration haha

Thank you everybody for the feedback! It really motivates me!

Really nice job! The short is quite funny, and also technically well done! Maybe you could have added some small detail to the scene. I understand that you probably kept it really simple on purpose, still I think that a couple of elements on the kerb, a manhole on the ground… something like this would have add some small variation to the scenography, without disturbing the viewer.

However that’s more of my personal taste, the work is great! Well done!

Amazing short! I really enjoyed this one.

Thanks for sharing it with the rest of us.

fantastic
very professional. I do love the credits too

I KNEW he was going to hit that door, so satisfying to actually have it happen. awesome clip, the music goes really well with it

only problem i had was when he rolled up the window. i thought that red’ish thing was smoke xD

keep it up man … nice one

This is simply just awesome! Expected he will bump into someone, but I did not expect this!

Thank you for this short. It made my day.

Great animation! I loved it. c:

Oh how I hate parallel parking! I drive around the block rather than embarrass myself trying to not tap other vehicles. This clip is great!