This is my new “Clockophone” - it was made after I saw a post in the Animation & Rigging Section asking how to build an air driven music machine - I just got a bit carried away. :eyebrowlift2: It’s just a start of what could be a long, complicated and involved project, depending on the feedback (the worse the comments, the more I will add to the project).

I have now learned how to add audio to an animation in Blender, so today is a good day, BTW, this project took me around 12 hours so far.

Here’s a peek at it: 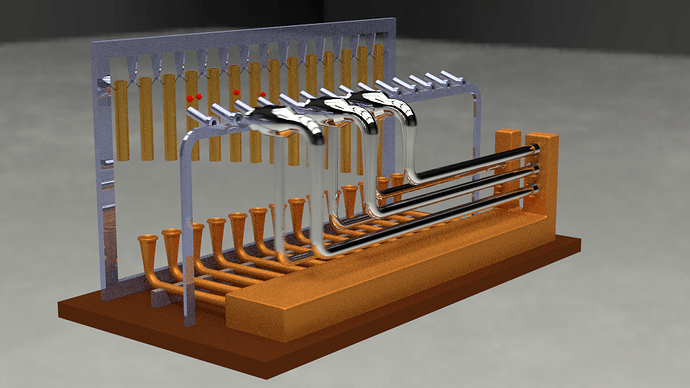 Here’s a video of it in operation (crank up the volume):

The audio was done with my TMK88 keyboard and Reason http://www.propellerheads.se using the “Tubular Bells” Combinator patch. I did the full track several years ago and have just cut out this bit for the animation.

I think the balls, once they hit the bells, fall too slowly and without much acceleration, almost at constant speed.

Thanks @Ovnun… I will see if I can fix that - I am using a Follow Path constraint and have not worked out a good way to accelerate the balls smoothly yet.

…Only problem with this is that the balls are not bouncing off the bells now. Does anyone have any ideas?

I’m new to blender but I am an after effects user and a lot of times we’ll use bezier curves vs linear and manually adjust the handles on the curves to speed up or slow down animations exactly where we want to. Should work similar in blenders graph editor

I’m new to blender but I am an after effects user and a lot of times we’ll use bezier curves vs linear and manually adjust the handles on the curves to speed up or slow down animations exactly where we want to. Should work similar in blenders graph editor

Thanks for that - I ended up using Sinusoidal mode for the “drop” keyframes, and shortening the drop sequence (by moving the end of the sequences in the Graph Editor - not too tedious on all these notes…) now it looks right, I will post another video once I have got some more of the machine built.

Nice, looking forward to it

I have done some more building - added the bellows to power the balls, the little hammers playing the pick-bass strings section (the chrome cone is where this sound comes out) and the tubas playing the sustain bass. I have still got a synth and reed organ to go, I am not sure what these will look like yet :no:, but here is an update of progress: 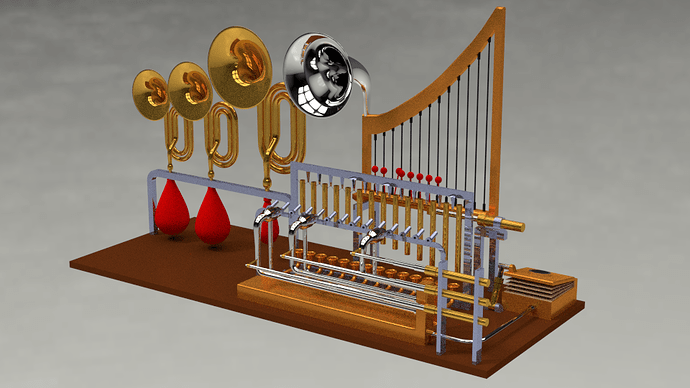 More video once I have made a little more progress. :spin:

PS. I forgot to say that the strings and bells are all in the correct proportion; each bell in the sequence is 0.94385 times the length of the previous, this being the harmonic factor for going from F to F sharp for example. To be exact you should use the 12th root of 0.5. Sad day when you learn nothing isn’t it.

This type of thing is amazing to me, as music greatly enhances any imagery. This is or will be a masterpiece once finished. nice work!

Here are the reed organ pipes, with a close-up of the reeds: 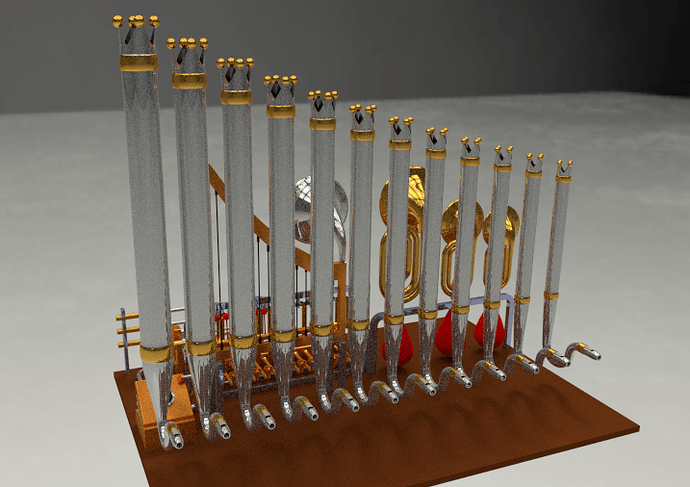 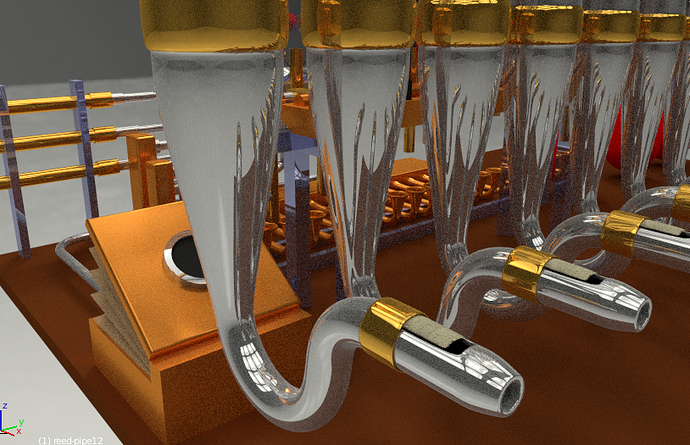 I hope to have the air feeds to these animated in the next few days or so, I will then post another video.

I think I might add another bank of pipes later and add the organ intro from “Whiter Shade of Pale” to the sequence.

Here is the tone generator for the “Hammond” Organ: 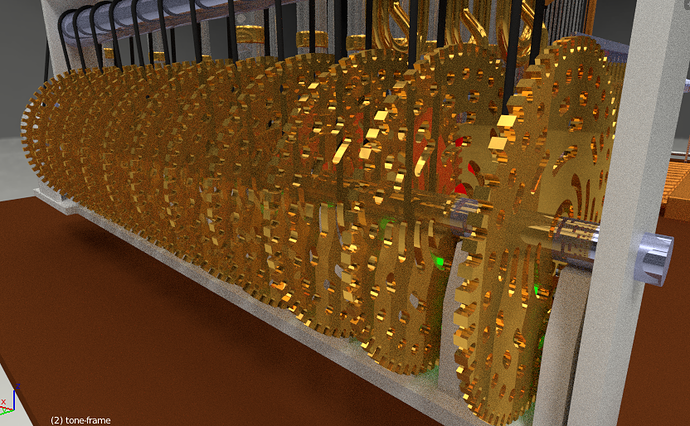 and one of the rotors, 7 lights are passed through this wheel onto photo cells to generate fixed frequency AC signals, which are used to generate the sounds. On the original, an electromagnetic pickup was used instead of my light system. Each wheel rotates at the 12th root of 0.5 slower than the previous one to get the different tones along a scale, each wheel generates 7 tones, each one half the frequency of the previous working from the outside inwards. This gives 84 basic tones, which can be modified electrically to produce an infinite number of notes along any scale. 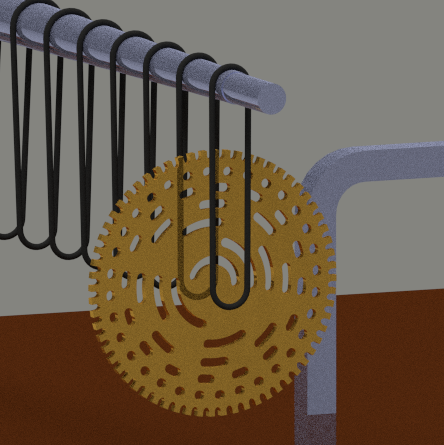 I have yet to produce the amplifier and Leslie speaker cabinet, this will be my next task, then the music sequence reader…

First look at the Leslie cabinet and amplifier, there is some motion blur on the treble horns, as these are rotating one rev every 1.5 frames. :spin: 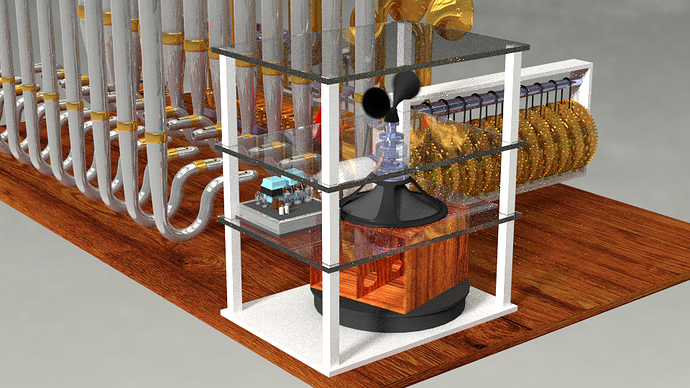 I hope to start the sequence reader later today.

I don’t understand anything regarding the music theory behind it, but, hey, that’s a great project

Only problem that I see is that the rods do not slide. They grow longer and shorter. The rods should remain of equal length and slide through the bushings, being visible at both ends.

They are going to be telescopic when I get around to doing them properly! :yes: They take air pressure from the “box” they are connected to, this box also serves to return the balls to the guns ready to be fired again. So they should not stick out the other side, but I have to admit I was lazy initially in not making them multi-stage telescopic as they should be, like the cylinders moving them in later images…:o

@minoribus - thanks for the kind words, I can explain the music theory in more detail if you would like that…:eek:

…or you could read all about the Hammond here:

The Hammond organ is an electric organ, invented by Laurens Hammond and John M. Hanert and first manufactured in 1935. Various models have been produced, most of which use sliding drawbars to specify a variety of sounds. Until 1975, Hammond organs generated sound by creating an electric current from rotating a metal tonewheel near an electromagnetic pickup, and then strengthening the signal with an amplifier so it can drive a speaker cabinet. Around two million Hammond organs have been manu Th...

Harmonic frequencies and string lengths based upon harmonics are easier to explain if you look at a guitar fret board, the twelfth fret is half way along the string length and makes a note one octave (8 notes - 12 sub-notes if you count sharps and flats) higher. To get equal harmonic spacing of the frets, each must be an exact sub-division of the length of the string remaining after each fret, up to the half way point, so 12 frets is 0.5 x string length, therefore the number that multiplied by itself 12 times to make 0.5 must be the twelfth root of 0.5 or 0.5 [SUP]0.08333333333333333 [/SUP]or approximately 0.9438743126817. So if you take the length of the string from guitar nut to the bridge and multiply that by 0.9438743126817 you get the distance of the first fret from the nut. You then multiply the distance from the first fret to the bridge and multiply that by 0.9438743126817 again to get the distance to the second fret, and so on until you get to halfway. The next twelve frets are half the respective first section frets away from the halfway point (the 24th fret is 0.75 times string length measured from the nut), and so on if you have more than 24 frets. The 12 notes in an octave are, for example the C Major scale; C, C[SUB]sharp,[/SUB] D, D[SUB]sharp,[/SUB] E, E[SUB]sharp,[/SUB] F, G, G[SUB]sharp,[/SUB] A, A[SUB]sharp,[/SUB] B - It should also be noted that E[SUB]flat[/SUB] is also D[SUB]sharp[/SUB] - Simples! 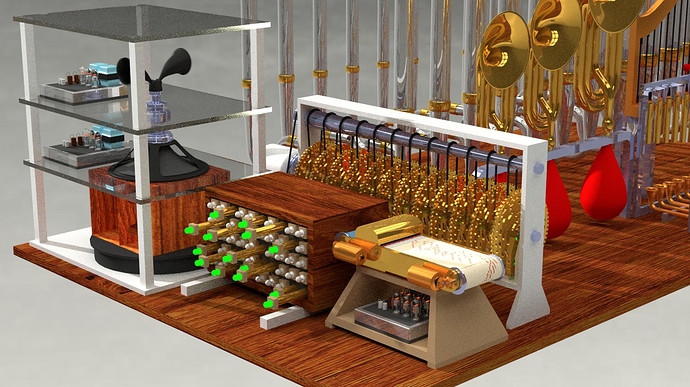 I have now added the “Hammond” music sequence reader - I took the piano roll image from my Reason project. I have also added the “Drawbar” box used to get the differing tones from the base notes produced by the tone generator mechanism, this represents the “stops” on an organ. I have added the second treble amp - you will note all the electronics are valve based rather than solid state. (Anyone under 40 years old will be wondering what the hell I am on about when I speak of “Valve Electronics” - look in your history books… :D). I intend to add some wiring harnesses and then make another video, with the Hammond playing the organ intro to Whiter Shade of Pale. I have already produced the audio in Reason using the M100/Hammond Combinator Patch with some tweaks of my own. I just need to render the animation once I am happy with the model.

PS. This project is getting way bigger than I ever imagined - I am now totally hooked on it. :rolleyes:

just a note: you can use multiple handle types on a single f-curve.

just a note: you can use multiple handle types on a single f-curve.

Thank you for that - I am using both “linear” and “bounce” handle types on the pick-bass strings to get them vibrating properly, these should become apparent on a later video of the complete instruments on the Tubular Bells section. As regards the balls, I am experimenting with Physics for their descent after hitting the bells, with encouraging results, thanks must go to “He who knows who he is” for help in this regard, I am completely new to Physics so this is a good challenge.

PS. I am curious as to why the picture of a single rotor in post 12 is so popular compared to other images…

Latest update of the beast. :eyebrowlift: 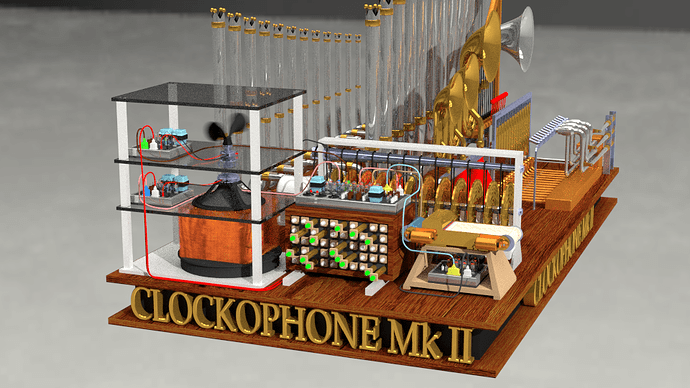 I have made the ball gun pipes telescopic now, I was just a bit lazy in the early stages, but kind of suspected someone would rumble me…

I am almost ready for the “Whiter Shade” video render, just some minor tweaks to go…

I’m liking this Blender adaptation of “animusic”. (It’s a thing. iirc, the guy who coined that term did his in C4D.) In your case I see it’s being done manually, but some variants of this animation genre actually use scripts that parse music files to trigger events. The cool thing about scripts is that it takes the busywork out of the animation process.

Too bad I don’t know Python, nor have much patience to seriously delve into programming, otherwise I’d consider making a script to parse .mmp files. (I know MIDI or FLP is still more common, but .mmp is XML-based and the music software that makes it is open source. Seems like those factors would make it a little easier.) Ideally such a script would generate a bunch of empties, and keyframe their state based on the timing extracted from the music file. (To be honest, if you think about it, any DAW song file really isn’t that different from an animation timeline. Events just happen to be sound, pitch, panning, volume, rather than various object states and position.) Then it’d be pretty obvious to use script-generated and keyframed empties to drive animation of various things rigged in your scene.

That’s quite an elaborate instrument design, I wonder how it’ll go in the finished animation?