The Oolark hunt in a raiding team of four, with each vehicle carrying a driver, an elite guard and two hunters. The raiding teams need to find, chase down and capture alive the elusive Shyala.

The vehicle they travel in is known as a Quagflier. The Quagflier is capable of easily traversing the choked swampy marshes of Pharos. Each Quagflier is capable of transporting a maximum of 20 Shyala prisoners (although in nothing resembling comfort). The wellbeing of the prisoners is not high on the list of priorities for the Oolark crew, however it is important that the Shyala arrive alive and in one piece.

Quagfliers are powered by Glitzer bugs and also use Glitzers to power the spotlights needed to track down hiding, and fleeing, Shyala.

Each Oolark squad customises their Quagflier, with competition between rival squads getting pretty intense. The Quagfliers take a bit of a beating each time they go out on a raid, and so adhoc repairs between hunts is the norm. Quagfliers are fast and brutal, as are the Oolarks that use them. 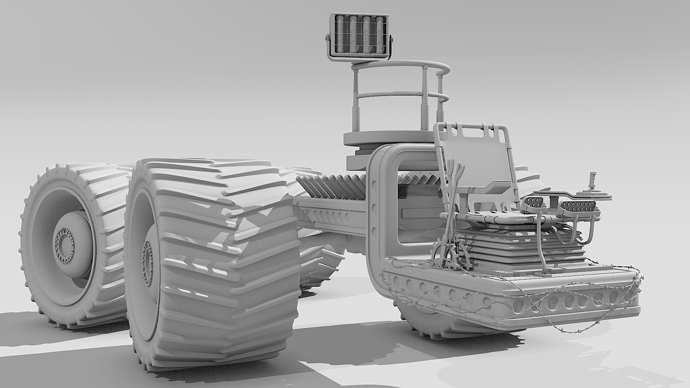 What a cool model. I’m surprised this doesn’t have more views. The story that goes along with it, is this based on an animation you’re working on?