I would greatly appreciate some tips here. I am looking to fix up a few things about this scene: the finials (ends of the curtain rod), the curtain rings, the window, and the flame inside of the lamp. Lastly, I am trying to make the scene dark, yet ensure everything is visible.

Any suggestions on how I can improve it?

The rain outside is a fluid, and as part of an animation, looks fairly realistic, so I’m happy with that part. Although it looks strange as a still. 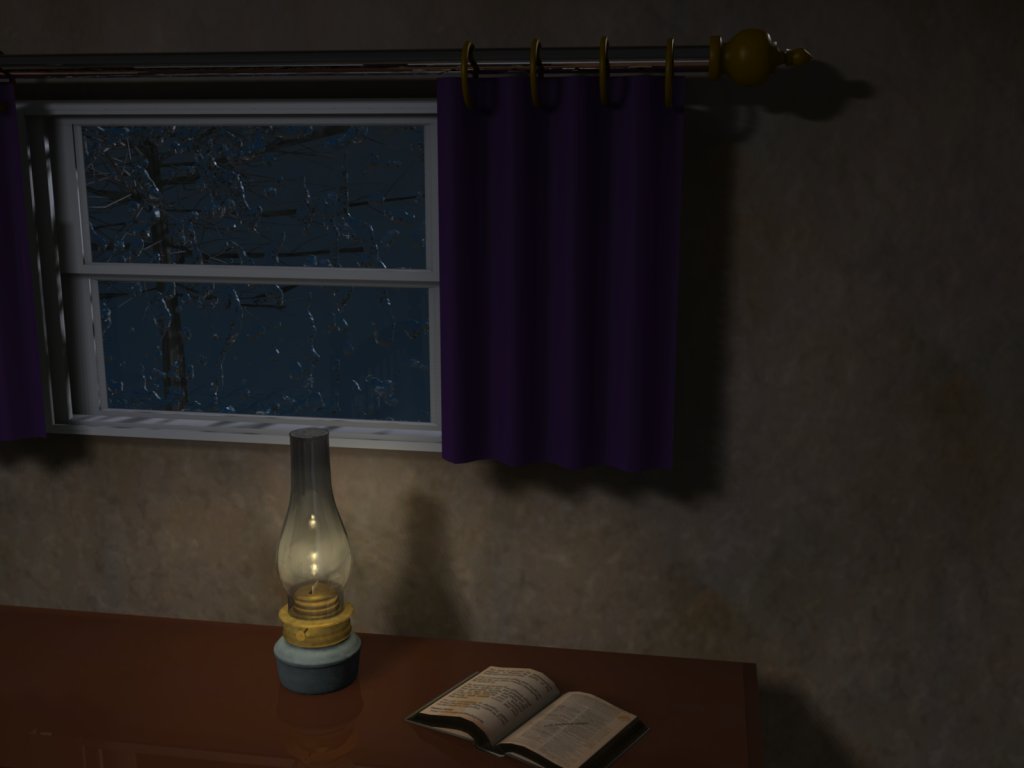 This is a good piece of work, but i think the wall texture should be a bit more detailed.
The Rain looks really good.

You have to deal with the disproportion both of the lamp itself and between the lamp and the book.but nice work …

I especially appreciated the comment about the lamp being too big. I took a look at my own oil-lamp and changed the proportions accordingly. Turns out that a regular hardcover book standing on end is about the same height as a lamp.

Adjusted some of the wall texturing, changed the brass rings and finials, and subdivided the curtain mesh (softbody used when the wind blows).

Thanks for the suggestions; I found them quite valuable.

I trust the brightness level is okay. 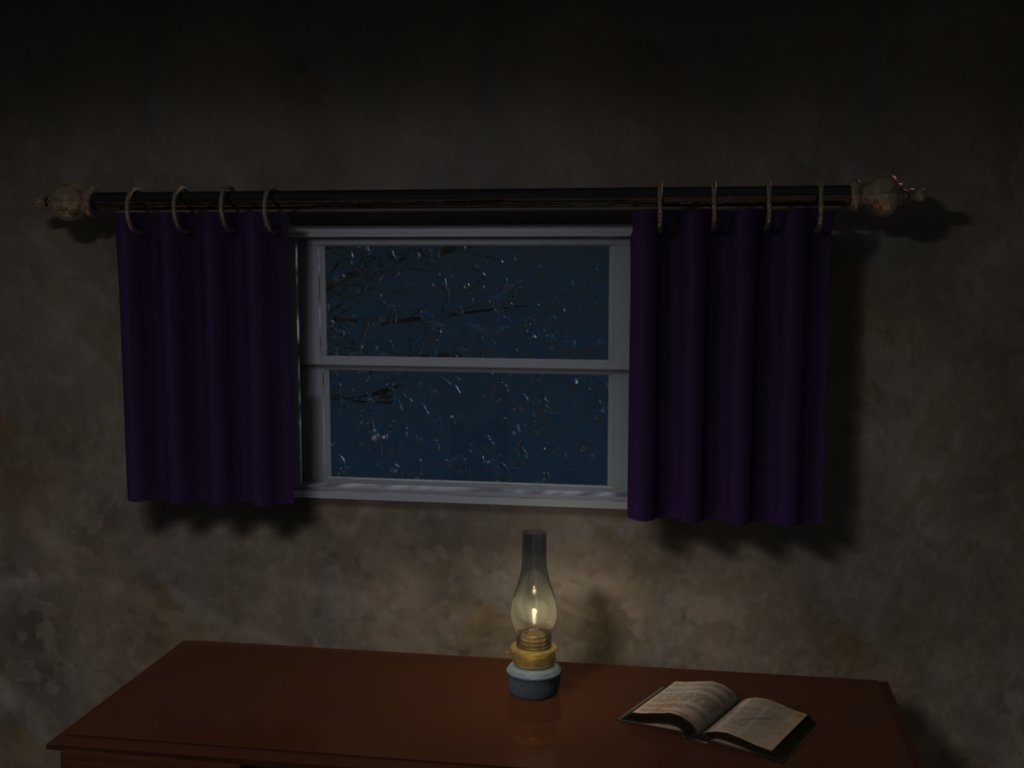 Its getting better, there is one point: The window, or not the window itself, the outside.
There is a tree and the standart blue background, change it.
Put some clouds out there, or maybe it is night, then you can add a lightingbolt into the sky, which illuminates the tree and some clouds.

The curtains feel flat to me, they seem too uniform. Granted curtains are, but you can add a little bit of randomness into the folds. The size of the book and lamp was a good catch but another thing I noticed is the bar supporting the curtains is very thick. As for lightning I like the idea of keeping the scene lit so you can see everything but I think you need to decide where your light source is. Since this is a night scene unlike the day if theres light, its artificial of course but more importantly you can tell the direction of the light source by the shadow. With your scene you have this beautiful lamp model which you can really play as your main light source and get some nice strong directional and moody shadows for the scene but the shadows for the curtain and bar point towards a ceiling light, which seems to be flattening the scene. Two other things, the table could use a texture, right now it has a nice shiny luster to it but the over feel of the scene seems to be leaning towards a foreboding feeling, also the window reminds me of a nice new white window that was installed only a few days ago. You have a great concept to work with and the models are quite nice. What you have going on outside the window is great too but I really think you need to push the textures and lighting to help bring of the direction you wan to take this scene as far as the feeling you want the viewer to have once they look at it.

Wow. Thank you for the great suggestions. It’s amazing what a change in lighting can really do to a virtual room.

There’s not much I can do with the curtains at this point; they are an animated soft body, so they will bend and change as softbodies are wont to do. I agree, though, that they should not be so uniform (and could probably stand a slight lengthening). The rod was definitely too thick, and too reflective. Also, because of the animation, I cannot include a single bolt of lightning, as much as I would love to add it to the outside.

I’ve eliminated the reflection of the desk; changed it to use a real wood grain as its normals. The window frame now uses an old chipped paint texture.

But the lighting seems to have affected the scene the most. The room’s overhead light has been electrocuted (er, taken out of the scene). In its stead, I added a lamp to the oil lamp, which seemed fitting. The flatness now seems to have been vanquished, and I greatly enjoy seeing the shading on the book’s pages!

Unfortunately, the render time has shot up considerably.

Is there any way to quickly tell which object(s) are holding the most vertices in a scene?

Many thanks for all the suggestions! If there are any ideas on how to change the world colour so that it looks more realistic (aside from the addition of clouds, which is an awesome idea), I’d enjoy reading them. 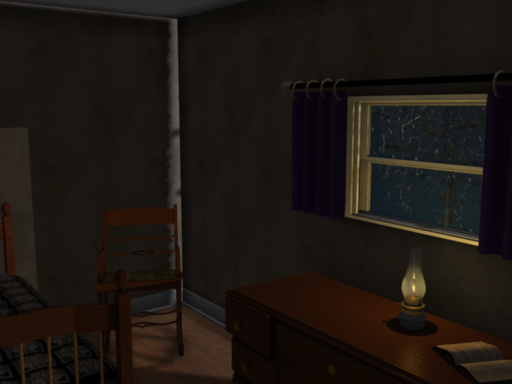 But what is this snow-ish white thing on the wall?
And change the background from this standart blue color!!!

Try something out, change the color, and decide what would fit.

But this is really cool, and its getting better and better.

That’s good:D
I think the wood on the chest of drawers is a bit too reflective and the white bit on the wall is weird, but other than that it’s a pretty good image:yes:

The snowish white thing is caused by a halo light shining forth from the outside and into the room … at an oblique angle, set “high” in the sky. This is to represent the light of the moon. As it shines through the glass and raindrops, the blue-white light is what you see.

Hmmm. Although it is a rarity that moonlight shines on a rainy night (but, just as sunlight shines when it rains [rainbow], the moon can shine [and produce a moonbow – I’ve seen one!]). And without it, the glistening rain doth not glisten. Any ideas on how to deal with the moonlight?

The specularity on the table has been toned down.

I found RobertT’s explanation of how to make quivering, shivering, flickering flame. I hope to encorporate it into the final animation. I really like the soft glow of the oil lamp at this point. Thanks for suggesting to knock out the overhead illumination. The music now really fits the scene … if I get permission to use the sound, that is. 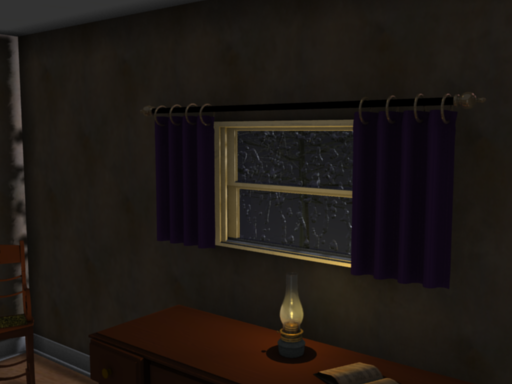 Yeah this is cool, so much better now.
nice image

The curtains that were once flat are now velvety smooth, thanks to a wonderful velvet shader by Oldin. I have to fix up the candle flame. I’ve added two small revolving lights that I hope <crossed fingers> will give some subtle flicker to the illumination. Probably going to put a halo around the flame for a soft glow.

I’ve added texturing to the desk, and moved the lamp out further from the curtains so that the lighting is much more dramatic. The sky is no longer the standard colour; I copied a colour from a pixel within a dusky-sky photograph. The cloudy backround wasn’t showing through, so it got nixed.

Here’s the updated version, with many thanks to and for your suggestions. 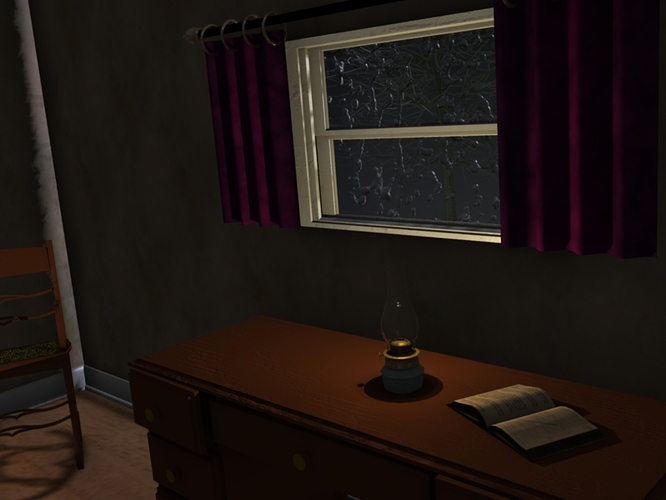 It’s getting better and better.But why did you remove the fire.And I have just noticed that your curtain rings are pretty big.(…and so is the curtain rod)

The fire didn’t really get removed from the .blend file. It was a wet-ware problem; I had moved the lights for the flame over to another layer. I also wasn’t satisfied with how the flame looked. Everything is back now, looking rather sly. The rings have been reduced in size, the grain on the table enhanced and the moonlight chopped out of the scene.

The flame consists of five lights at various levels and colour mixes. The flame itself is a mesh, wired up to a lattice so that I can animate it. The curtains have been lengthened, without the help of a tailor. And the glass for the oil lamp now has reflectivity.

Again, your critiques were quite valuable. Enjoy the render! 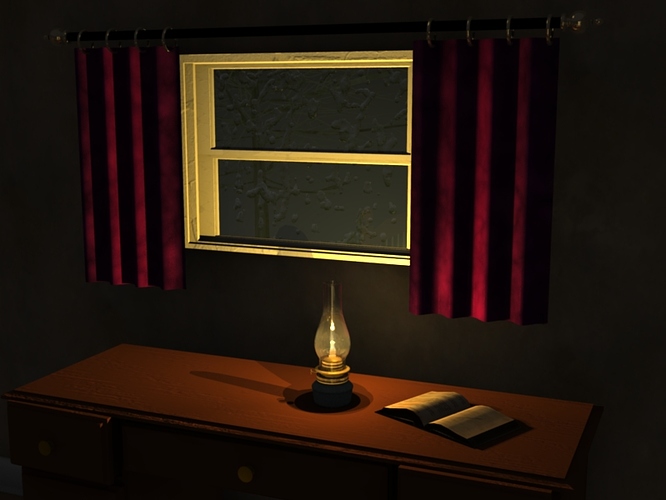 Hımm,i’m am not obsessed to proportion issue but rain drops on the window glass look bigger then it should be.I also noticed that writings on the pages are removed(since the image size is small maybe they are not discernable to my eyes).The work looks classy.But I have to admit that if the photorealism was your point while you were doin’ this,it is not close to it.If you say it is close to what was on your mind at the beginning of the work then it is ok.

Yes, the rain drops are a bit big; as they move during the animation they pass for rain running down a window pane. The writing is still there, just too small to see.

I’m going more for feeling than for realism. Something spooky, laced with evil.

Thanks again for all the help!

IT has come along quite nice, I was thinkin you might want to give the table a wood grain texture to go along with the bump you have applied, or thats what it looks like, might just be the colormap with some slight grain in it… Either way bring out the wood grain a bit. Also you might want to take its texture into gimp or photoshop so you can lighten or darken spots in the grain so it doesn’t look quite so uniform, really play around with it to help make sure that the texture isn’t repeating. I know certain textures will, patterns in wallpaper, etc. But color fade, things get stained etc. Add those to your textures and see what happens, I think with your current lighting variations like that would look quite nice.