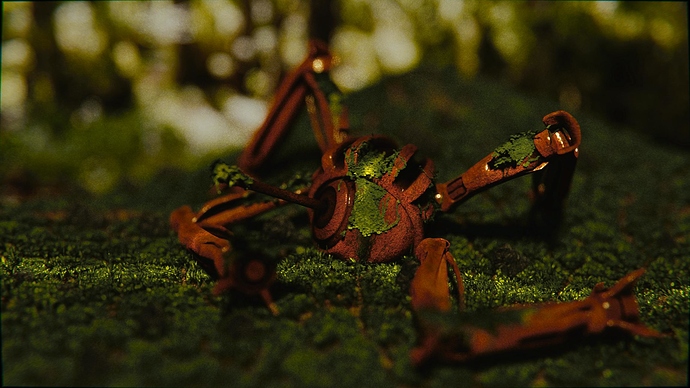 After a year of learning Blender, I finally made something I don’t feel nauseous sharing on an actual art site.
Please give hard criticism, it will help! Being a 15 year old, you don’t meet a lot of CG artists who can give advice.

“This war-torn machine caused mass mayhem and destruction, now it lays here. Blanketed in ivy, this rusted weapon is a testament to our past mistakes. A broken reminder that some scars are too deep to heal.”
-Lieutenant Erakkae, Heavy Weapons Division

Hello Brodie!
I really like your image.
But there is a problem: the object does not look like a Big war machine. It looks like a Micro war machine.
To show the size of a large machine, view should be from the bottom.
Or in the scene should be an object for comparison scale (ruins of a building for example).
Anyway this is a good start. I’m sure you’ll be able to do something great. Good luck!

Thank you so much for the advice! I will work on this again!

Great work on the focus

I think the main issue is one of scale. Or rather,perceived scale. Defocusing is giving it a tilt-shift effect from my point of view. Which can make the subject look like a miniature. And as Timur said, something else in the image to suggest scale would help to sell it as something big, if that’s the intent.

Perhaps a small character standing on one of the legs or near it as well as ruins. It wouldn’t necessarily have to be a detailed character either. And some perspective would help in that regard too. As Timur also mentioned, a view point looking up from the ground might give the impression of something much larger.

The foliage in it’s current form looks like moss. But at that scale it makes the viewer feel as though they’re looking at something small sitting close to the ground. As if they found a little machine lying on the forest floor.

I hope you take these comments as they’re intended. Just opinions as a viewer. I think you’ve done some really great work so far.

Thank you! I didn’t think my first post would get so much help! I will edit the view and focus and add something to help define its size!

Agreed with Macser, it seem like the machine is too small