I’ve been a long time reader of these forums. I love Blender. I just finished a project of my own and would love some constructive feedback (feel free to give me feedback on the concept as well as the work I did in Blender).

Like many people, I am waiting for a fully functional Multi-Touch computer. Over the past year I’ve been just a little obsessed with the topic. So, I developed a workable interface concept and made a few videos and concept art to show it off. I call it Slate.

Obviously, I used Blender! All the videos and the first few concept shots were done with Blender. I used Inkscape to create the graphics for Slate’s GUI. Oh, and I used Garageband for the audio.

The Slate model is my own. I had made three different concept versions before settling on this one. While the point of the videos and the concept art is to show off the interface paradigm, I felt that a realistic computer body was still important. Slate is my digital pride and joy.

I did not make the hand model. I got the hand model from www.sci.utah.edu/~wald/animrep/. But, I did alter the skin texture, and I rigged it with an armature for posing. I tried for the whole summer last year to make a convincing hand model. I guess I don’t have the skills for organic looking objects.

It took me around three months to make all these videos. If I had been better at using Blender maybe I could have done the work in less time. .

Like I said above. I love Blender and Multi-Touch, so feel free to chat about both in this thread (I hope to make a video showing off a Multi-Touch Blender in a few months). 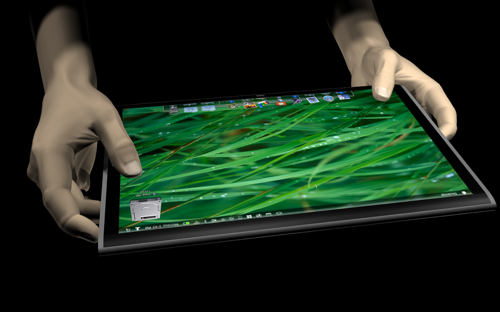 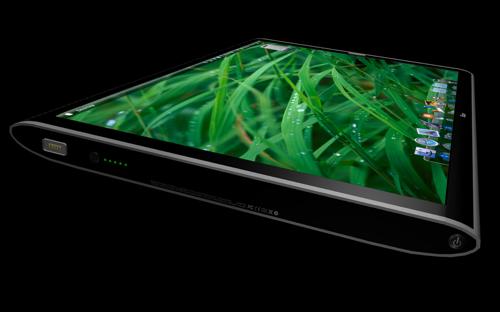 Well. That’s Slate. I’m not the best at Blender. But I would love to get better. Any questions or comments?

Ah, the Open Slate Project. (http://openslate.net/) Not quite what I was working on, but I see the possible connection. Looks to be stylus based. I chose the name Slate because I wanted to avoid anything with the word Tablet.

Ah, the Open Slate Project. (still can’t post links without Moderator approval:confused:). Not quite what I was working on, but I see the possible connection. Looks to be stylus based. I chose the name Slate because I wanted to avoid anything with the word Tablet.

It seems Blender Nation made a quick post about my videos! “Apple tablet pc video” (sorry, I can’t post links yet)

After reading some of the comments there I’d just like to say that I know very well that I am a novice and I am not pretending to be any good with Blender or any other type of digital art software. I had an idea and chose the best software to express it. But I would like to get better, so I would appreciate any constructive criticism.