The State of Art - First time trying out grooming in Blender

Finished this piece up a few weeks ago, posting here cause I’ve just joined this wonderful site. Model was mostly done in Zbrush, and Maya (for UV’ing), textured in Substance Painter, and brought into Blender to try grooming, shading, lighting and rendering.

Much was learned, mostly on the optimization front. Ended up cutting about 10 gigs worth of RAM used during rendering by going down a few levels in my geometry subdivision and instead using the Displace modifier + Subdivision Surface modifier to get back the detail. I thought it was the groom at first that was destroying my ability to render, and did cut down some of the amount of hairs however it was really doing that geo optimization that saved me at the end of the day. The Displace modifier is really handy too because instead of having to find a good way to daisy chain all the displacement maps that I exported from Zbrush, which are tied to objects which can share a UV tile but are not part of the same Subtool (Something I would normally do in a Maya shader network) I can just load those displacements onto the object.

I know I’m still a beginner at Blender, so maybe I just don’t know how to, but I do find it annoying how Blender loads a udim texture. First, I import the image, then I have to open it through the UV/Image Editor, then add the number of tiles manually, and then reload the image… Maybe there’s a better way?

Anyways, grooming was also very interesting. I initially tried the hairnet plugin but couldn’t get it to work, so went with just creating the grooms one by one, shaping them, and playing with the particle settings. Next time I would like to spend more time on doing more layers of grooms, to help integrate the main hairs that are seen in a piece.

Surfacing is definitely fun, with EEVEE helping me get 80% of the way there, and then switching over to Cycles for the last 20%. Great results, good speed, I can’t complain.

More rants on my artstation. Glad to have joined this community, I’m looking forward to learning more and growing with the rest of you all. 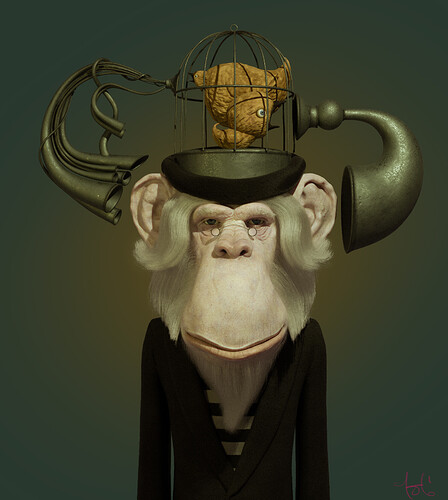