Way back in 1997, a game was released upon the world that would set new standards for vehicle racing games. Featuring open world racing, new at the time, there was no need for boring linear racing between checkpoints. You could drive to the next checkpoint any which way you wanted. Actually, there was no need for checkpoints in the first place. There were multiple ways to win a race and one of them was to wreck your opponents’ cars, and that was a lot more fun.
I was fascinated by the vehicle physics and the car damage system the game had. Even today, I still enjoy it. The game was Carmageddon. This is one of the cars in that game.

The game got a reboot with Carmageddon: Reincarnation in 2015, taking vehicle damage system to an insane new level and a lot cooler looking cars (and hires too).
Stainless did not disappoint. It is a monster and it follows the same gorgeous vehicular combat/racing type as Carmageddon (1997). The Twister is available in Reincarnation too, but I wanted to stay true to the original, creating a somewhat real-looking version based on a low poly game car.

Rendering done with LuxRender.
Concrete textures, parking lines and oil spills from plaintextures. The rest are created in Substance Painter. 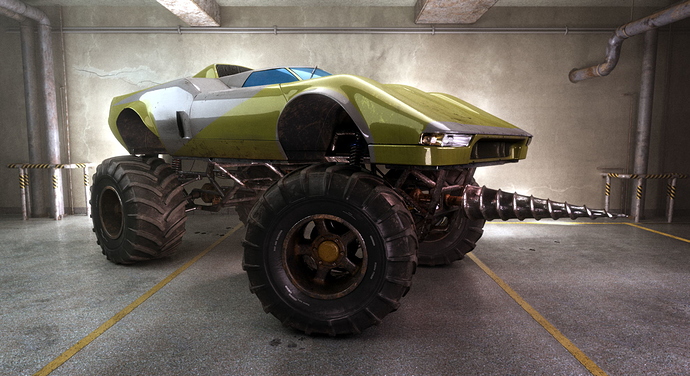 That’s really a great work, it makes me want to have a try this game.
Thanks for sharing.

Looks nice! Did you use blender for modeling?

Thanks, guys!
Yes, Blender was used for modeling.