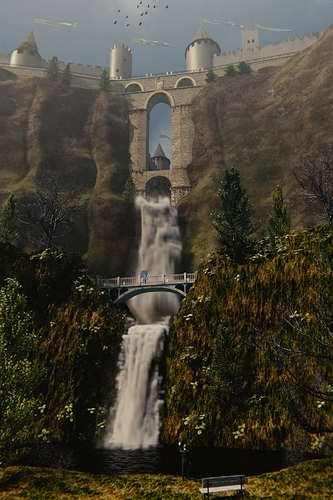 150 samples, 2 smoke simulations for the waterfalls, some cloths for the flags.

The cliff is too fuzzy and the bottom level cliff’s texture is to low res. You can easily see the repeating patterns it looks unrealistic you need a wider scale texture

and the stone on the castle towers is too glossy and there is some weird blue thing on the lower bridge that is unidentifiable and come on you could do more than 150 samples for a still render do at least 300 especially with all those tiny branches.

I suggest that the textures and tonal-range of the upper falls (and surrounding cliffs) probably should be made similar to the lower portion, since it is fairly improbable that the two landscapes would occur together. The general “blue cast” on the upper portion is unnecessary, and also introduces a visual paradox into the scene. We may presume (and an experienced viewer will presume) that the proportions of the two falls are about the same as the real Multnomah Falls. Notice how in photos of the real falls the “color cast” comes mostly from the fact that the upper escarpment is a rugged rock cliff. (You might wish to consider making the surroundings of the upper falls be “rocky,” too.)

If what you are going for is a “this is a fantasy image” forced-perspective look, then I suggest modeling it that way and using an appropriate camera-lens setting to create the forced effect. If simulation of the waterfall then becomes problematic, consider creating a separate waterfall layer that is composited into the scene and that “looks correct” when it’s there.

Living only about 30 miles from Multnomah Falls, that immediately came to mind.

The blue thing on the bridge is a person with an umbrella. I know from experience you will get sprayed on standing on the bridge, though most people either get wet or use a poncho, not many umbrellas.

I like the image but needs a lot of texture work.
edit: Needs texture work to be realistic, but it would work ok as a background for a animated cartoon. Looks a lot like what I see when my daughter watches her ever growing collection of Barbie videos.

Thank you for your replies! Now I know where all my reference photos were taken

The bridge in the back spans over the Gorge of Ronda in Spain, and the castle reference is Carcassonne in France. There is no intention to recreate a real scene.

The “blue spot” is Pauline in a blue dress. She is wearing the dress in red in this image:

She is so small because of perspective.