The Unmaking of a cyborg, Animated Short.

For the eye… take a look on a closeup and try to figure out how the loops run and where the loops end. The trademark of the asian eye is the fold in the corner. This example is not perfect but I think you get my drift. 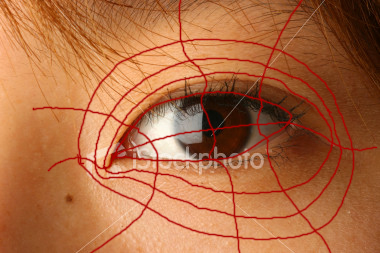 It’s actually quite common for Asian women to have plastic surgery to achieve that look. (one of my students had it done, she’s only about 9 years old!) Unlike with western faces which are so varied in ethnic influences and so more varied in colouration and shape, Asian faces tend to be closer to a single ethnic template, and they spend a lot of effort to stay within that template.

For example most of my Korean co-workers and friends have Korean only features, which are distinct from Japanese or Chinese features. In contrast, my face is influenced by my family, which has roots in Scotland, France, and Eastern Europe for the most recent past, and further back perhaps roman, celtic and anglo saxon influences.

I may change the shape of the eye a little, but I don’t really want to mess with geometry too much now. You can’t tell from my wire frame but the eyes are already quite close to that picture geometry wise, maybe I need to add more crease in the corners to counteract the subsurf which is making them rounder.

Actually I’m going to spend a little time on the eyes today, probably try and tackle the eyebrows. After that this evening should be time for the hair.

Well, I restyled the eyes and added some eyebrows, I also managed to finish the hair yesterday.

I used polygons rather than particles for the actual structure and then used a seperate blend file to create the particle effects. I then rendered the particle effects using an orthographic camera so that it came out with no perspective and allowed me to layout the hair patches on a UV map.

From here I can go back and animate the particle file to get an animated texture for the hair.

The hair is rigged with a simple rig which allows swaying and keeps it following the head. I wanted to do a more complex setup, but decided against it. I’m not 100% happy with the hair style, but using polygons there’s not a whole lot of scope for different styles which look good. This one works and has a sci-fi feel to it.

Not sure how good it’ll look when I start doing easy renders without SSS or shadows, I’m going to bake the skin with the hair attached so that soft shadows are added to the texture. Hopefully that will mean that I can turn off some of the more memory hungry features when I want to make an animation and still get a good result.

What do you think? I should point out that the skin texture hasn’t been baked here, I did a quick render before going to work. Didn’t have time to bake the skin too, so the eyes look a bit bright and the shadows are a bit too light.

I tried adding some make up to better define the eyes and do something with the lips, but I don’t like how it turned out. Korean women don’t tend to wear much make up (they don’t have to!) so I think the cleaner look is better.

Maybe I’ll just add some darkness to the edge of the eyes.

This weekend I’m going to finish rigging and start work on the clothes.

I want to finish this model by next month so I can work on a basic scene.

I’m still not happy that it looks either particularly Asian or female. Maybe the cheek bones are too strong. But I really want to stop fiddling with it and get on with the next step.

Well, this character is finished, after a long wait whilst I did some other stuff.

Mostly this model was just a tester for the main event. Just to run through the whole cycle of modeling, texturing and rigging.

I’m going to make some shoes and a simple walk animation. In the final animation she’s going to be kind of a nurse or orderly at the cyborg decommissioning center.

I’ve learned so much from this model, stuff to carry forward on to the next one, like better approaches to topology, rigging, texturing and some new techniques for hair and clothes.

After experimenting with softbody clothes, I can only say that for a low detail model it’s not really worth the effort, unless you plan to have a single character with lots of changes of wardrobe it’s better to just make the model with clothes integrated.

Here’s a quick pose showing the limits of my model and rig. You can see that the arm deformation is not so good and that the wrist bend in the wrong place.

With this project i originally intended there to be a robot skeleton underneath which would be revealed. Unfortunately, i started the skeleton first, so all the flaws in the skeleton carried through to the final model.

I’m still going to do a skeleton/skin mixed animation (during the animation she will step behind a screen and the robotic skeleton underneath will be revealed, like that bit in total recall when he walks through the metal detectors) so it wasn’t a total waste of time, however, next time I’ll make the skeleton last, so that it fits better with the human model.

I’m not really much of an organic modeler really, i prefer robots so perhaps this looks better than the human figure. There are few problems with it though, like the shoulders were lowered in the human to make it less manly, but I forgot that this would affect the robot. Also the face is wrong because I had to edit it rather heavily in order to fit the robot head inside the human body.

There is no texture for the robot right now, as I downloaded the gimp 2.4 yesterday and found that my normal map plug in is not compatible, also that the selection tool is much more memory hungry in this release because of the new features. I think I’m going to downgrade back to gimp 2.2, I use the normal map plug in quite a lot, and ditto the selection editor. It caused some slowdown on my machine before working at 1024x1024 with 18 layers with very detailed selections, but today my computer nearly crashed working with with a single layer and 512x512 image with quite basic selections.

The new features are nice, but I need performance rather than features. (I only have a crappy laptop, as I’m stuck here in Korea)