For a long time I’ve been obsessed with how video games are made and how they are played and since I’m going into university soon I was wondering what people’s thoughts were about the industry. Also if you could share your wisdom as to what I should be doing to get prepared if I want to follow that aspiration. My doors are still wide open so I have no idea where I want to go or what I want to do but if anyone who has spent time in the industry to comment or explain how it is that would be great. I hope this post kind of makes sense but please don’t post tl;dr

Fullerton’s Game Design Workshop has a lot about what you’ll need to know about the game design and development process, and it also includes a decent section about how the games industry works etc. The book isn’t 100% about video games (it also is about board games, tabletop games, etc) but pretty much all of it is applicable. Actually, it would be a good idea to learn about board games and tabletop games :yes:

Whether you want to go into game design, programming, art, marketing, management or whatever, I recommend at least learning a little bit about each of the other subjects. A four-year university is probably your best bet- you can be made into a worker in two years, but IMO it takes longer than that for you to become an asset… although this may depend on the student. Depending on how much you still like video games after four years, graduate school may be a good idea as well

Game Architecture and Design is a super good book: 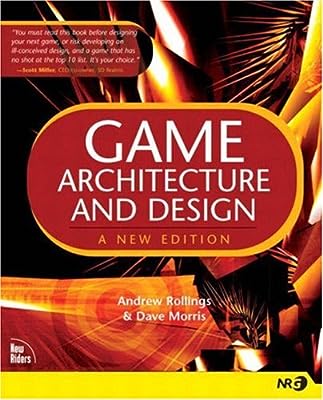 Game Architecture and Design: A New Edition is a revision of the classic that you have been waiting for! This is a detailed guide to game design and planning from first concept to the start of develop ...

To get into a design roll you will probably have to get in the door somewhere else, programming, art, or on an offchance music.

Another option is to get in the industry through QA. There are a lot of opportunities to move to a developer from that type of position. Once your at the dev house, there will be plenty of opportunity to move where you want within the company.

I’ve befriended a slew of level designers through my years, most came through QA, but all at some point proved they knew the tools - through mod communities or by showing stuff in house after working there as QA. That means, for this type of position, learning Id’s Radiant, Valve’s Hammer, or UnrealEd.

I spoke with Fausto De Martini who is the lead cinematic artist for blizzard (http://www.fausto3d.com/) for a bit at a convention - he also claimed portfolio is key. I specifically asked about Blender, and he claimed that the knowledge is transferable. Tool does not matter, just make really awesome stuff. (He defiantly knew about Blender, and appeared to think it was a good tool) The way he got into the industry is somebody at blizzard noticed him posting a WIP on CGTalk. It got him in the door. (His space marine project)

Thanks for the replies, I actually learned about Blender when an EA representative came to our school and gave us ways to get started. Since you guys seem quite knowledgeable I was wondering if it’s common for companies to accept internships? (I was just wondering even though I am looking at doing a degree in computer science). Lastly I guess this is a stupid question but are you guys satisfied with your work and what you do, do you feel challanged, etc? (maybe you cant say because your employers are watching

) Again thanks for the great feedback.

However, in the current climate I doubt this is still the case… ie 2008 - present, studios have been falling like dominoes… EA has cut staff brutally across the board (the UK studio has barely any internal production capacity anymore…and now relies on contractors and outsourcing almost exclusively…

There are thousands of start ups, which means that there are lots of graduate jobs… these mostly go out of business in the first year and are often run by “not very knowledgeable” people… so learning opportunities are often limited…

Given the resources at one’s disposal, and information at hand, it is quite possible for anyone to get into this field, with skill and luck. However, in my opinion, I would advise that you spread your talent to get the best possible chance at getting a job best suited to get you a home and then supply your family’s (future?) needs.
You have a choice now, don’t regret it in ten years to come. I have had contact with just one professional games artist in Britain some years ago. He had sketched a gun to be used in a video game and gave the impression that the world’s doors was open for him. The weapon was quite good to look, the paper it was drawn on was wrinkled, but that’s probably how it’s supposed to be. And at the end of the day, it was like any other. The guy probably had to sell it (and himself) to some busy head of graphics who right now is unemployed.

Well, you might want to check out the GDC (Game Developer Conference). It’s coming up in March. You can be a student volunteer. You’ll learn a lot that way.

Or be a student volunteer at Siggraph this year.

I’m not in the industry, but a few years back I did attend a good conference on How to get into the industry. If nothing else, it showed me I was not suited. I had the skills and the background, but I failed the first question they ask, “What games do you love?”

Use your search engine. Try “how do I get into the games industry”.

Computer science is a good major for you though. If I were you I would avoid a “game design” major, if any exist. And if you’re also good at modeling, that’s a plus. Although I’m still in college and work at a golf course so I might not know what I’m talking about.

It’s chaos right now, as the studios struggle to come up with fresh ideas while the technology and platforms are rapidly changing and expanding as player expectations are increasing. I am subbing to one of those thousands of game dev companies now, which is under contract to a major studio for a brand extension of a game/concept that was successful on one platform, and we are expanding it to another. We are marching toward a Summer release, but it is very fast and furious. I was up until 1:30 am killing bugs and fixing animations, and right back at it today as we have unrealistic deadlines that have to be met. You see, the major studio can always go to the next company to get it cranked out, so there is no option.

For you, as animations and concepts evolve, there is a lot of backfitting that has to be done, perfect for interns. Be prepared for repetitive monotonous work, however. Labor costs to develop the game is probably the #1 issue, as it is all a dice throw as to how well a game will actually sell in this economy, so to lower the risk of a disaster that folds the company, costs have to be kept low. Plus, there are a lot of people looking for work at almost any price.
Keep your hopes up, and make as many professional network connections as you can.