I have been working as an side project as i haven’t had access to my main computer where i keep almost everything related to blender. This project where at first nothing serious but rather just something that i did for fun. how ever as the project evolved I tout that it where rly fun to work on and that it might be an fun game, if it just get some more love and time in to it. Thats why i’m making this thread, as I won’t be able to finish this game on my own, but if some of you guys are interested in helping me out I thing we might be able to do something nice and fun out of it. 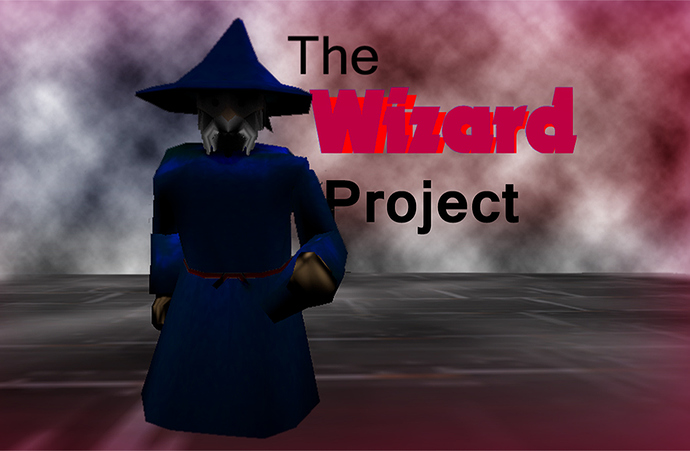 …anyway here is the game ide’:

You (the main player) play as an powerful Wizard whit your friends online or if you like to, on your own. The main Objective of the game is to level your character, do quests, kill mobs, explore the world and kill bosses. there will be many different game modes, including:

This is the ide’ for mechanic’s of the game:

Every player starts whit the same skills unlocked, you chose during game what skill to use - this mean that an player can build there own style, and if it didn’t work out change it at any time. there will be 6 category’s of skills, and the player will only be allowed to have 1 active from every category.
The skill-types are:
Projectile- here are projectile skills, as fireball, iceball , mm
Illusion - here are illusion skills as teleport, invisibility, mm
Splashing - here are ground hitting skills ( this are to be used when hitting the ground after a fall)
Divinity - here are healing and boosting skills
Focus- this is mostly passive and is powering up the player
good/evil - this skills are the only once that can NOT be chosen by the player. this skill will automatically be pickt based on how good or evil the player is.

the good/evil status is picked based on the previously actions of the player, for example if the player murder an other player, he get an more evil status, then if th instead heal or save the player he gets an nicer status.

the players don’t unlock any new skills whit higer levels but they do unlock more skins for the character (this don’t affect the game-play) whit higher level the player will also be able to take on special quests and kill special mobs.

ofc as I’m hoping to make this an team project this isn’t any sat goals for the game, but rather guidelines of what i hope that the outcome will look like.

I will not make this game whit hi end graphics’s, the graphical goal is to be compared whit an Nintendo 64 game. this have many reasons, one is that i love lowe poly models, bet also that in order to have many mobs and players at the same time it is best if they are as light as posible to run in the game engine.

Now when i have pressented the prodject to you guys here is the progress of what i have done so far:

Here is an video showing 2 players, moving around and using some of the spells.

Now then, what do you get for joining this project and my team?

this is the team that I’m looking for, if you find see yourself in any one of this rolls, feel free to pm me or leav an comment here:

Even if you don’t want to join me on this, plz give an comment and tell me what you tout of the game ide’?
all feedback is appreciated , positive as negative!

… and sry for my bad spelling during this post 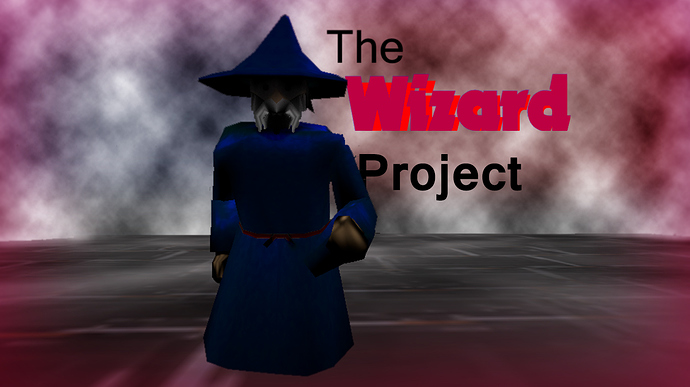 serious question based on curiosity- how do you make it an online game if you’re not making money from it to buy server space? or do i just not know what i’m talking about?

good question, I can see now that I weren’t very clear on this in the description.
So the plan is NOT to make an mmorpg, or mmo, but that there will be many smaller servers instead hosted by the users, I will give an option in the game to host you own server, so that ppl can join your game if you like them to.

this is an good way of keeping servers running for free. and if there is no servers up, the player can always host their own.

however there are some downsides to this kind of hosting, When i’m doing it this way i will need to save al the player data on the local machins of the user.

I hope that this gave you some answers

Allot of things have been changed and inproved in this game, I will make this an quick uppdate, so here u go:

Updated the game to use the latest version of blender

…and here are some screans:
Air Ship: Castle Town: (this is going to stand in an snowy part of the game, not in an green as in the pic) 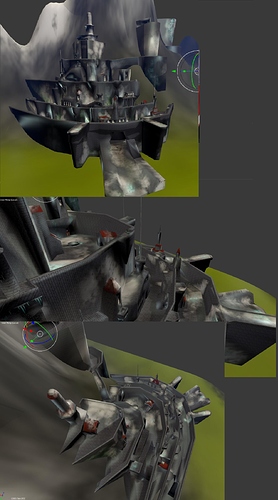 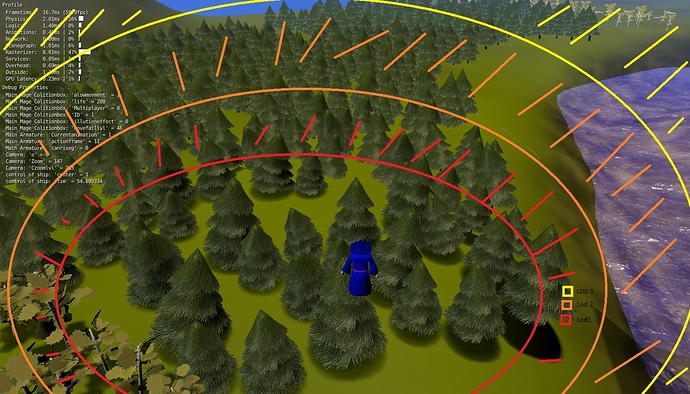 I’m Still locking 4 ppl to help me whit this, if ur intrested don’t be afraid to pm me.

and as always, feel free to give any feedback!

This is one of the first mmo game projects ive seen on the site with serious results. Keep up the good work

All I can say is… wow… God help you, but it looks like he already has… You, I think are the first to come this far on your own… WOW!!

Only problem is that the castle you have pictures of looks like that city from lord of the rings.

This is one of the first mmo game projects ive seen on the server with serious results. Keep up the good work

thx! glad you like it so far! ,the goal ain’t to make an mmo, but to make an online based game, whit alot of mmo/rpg elements.

All I can say is… wow… God help you, but it looks like he already has… You, I think are the first to come this far on your own… WOW!!

Thx! :), I don’t think I’m the first one… , and there is still allot of work to to until I will even be able to call it an alpha, but whit some time i’ll get there

Only problem is that the castle you have pictures of looks like that city from lord of the rings.

I think u mean Minas Tirith - the capital of Gondor.

The city is inspired from it, and it should be as I’m an big fan of J.R.R. Tolkiens and his work whit the “Lord of the rings”.

looks like that city from lord of the rings.

Minas Tirith, and yeah it does now that you mention it

… I might be able to part time this, but only because your place holder textures (as I assume they are) are bad enough to make my heart skip a beat. This isn’t a problem really, in the alpha stages, but if you plan on moving closer to a beta stage, that could be SERIOUSLY bad.

Please check your PMs, I sent you one just now.

OH and I was talking about the city’s textures, the others look fine.

Please check your PMs, I sent you one just now.

OH and I was talking about the city’s textures, the others look fine.

check em’ and gave you an answer.

…and yeah, the city got some rly bad texturing, but I haven’t been putting that much time in to it just yet, It will hopefully be improved later on.

thx for the feedback! it’s appreciated!

Hello everyone!
it haven’t gone long sins the last update on this but allot of progress have still been done.

Firstly, The project got an new Team member, Pohatu23!, You are warm welcome to the project and the team!

We have some others to that might join us later on, but I haven’t got any confirmation from them just yet.

Moving on to the progress that have been done:

and now some pictures of the progress:

showing the new forest and the new water.

forest where almost only made out of objects created by Pohatu23 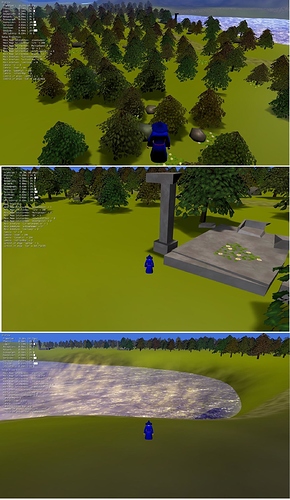 improvements and some work-in-progress of new area’s: 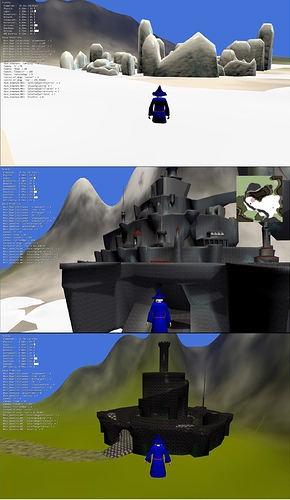 … and don’t forget to leave feedback, positive as negative, it’s all needed

Remember that we are still locking for ppl who is willing to help us whit this project and join the team. if you are interested send me an PM or leave an comment.

Hey esoneson, great job !
I’m still thinking the near rocks are a bit too low-poly, you should just apply a subsurf to them (keep the far LODs like they are)
I’m sorry but I made a mistake, I sent to you an older version of the file that has not got vertex painting on the ruins(so they’re uggly)

Here’s the real file(I did not do anything with the rocks or other things, I just vertex-painted the ruins):
[edit : link removed] 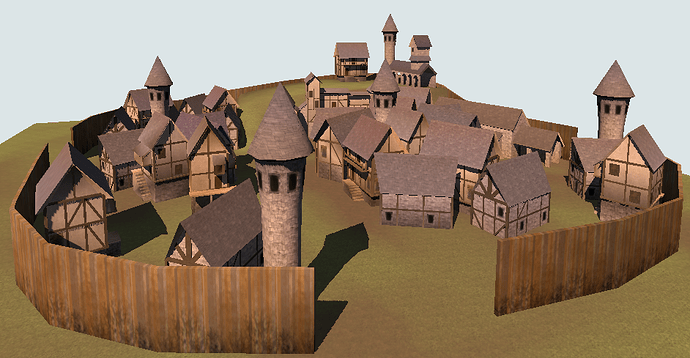 Okay, time for an update!

Here is what have been done from the last update:

Everything that is implemented do ofc use LOD.

Other than that I wold like to welcome our teams newest member wabuilderman!
Welcome to the team/project!

and as usual, here are some screens of the newly added stuff:
(remember that some are only using place-holder textures) 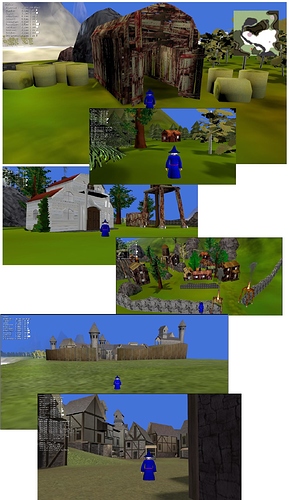 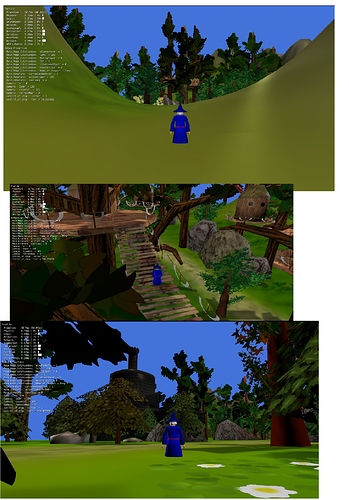 And don’t forget that we still are locking for ppl to help us out whit this project, if you’re interested feel free to say so in an comment or PM me! I sent you a PM a while ago

Nice work, do you have any spells done? Need simple scripts for spells /enemy ai?

So here is whats been going on lately:

I have been given Manny gr8th ideas and contributions, but haven’t been implementing that many as I have been hardly working on cleaning up the main file’s. This is now nearly done and in the progress I have been able to implement some new gr8th features that hopefully will improve the look of the game.

The biggest news is the completely remade map.
this map is way bigger than the last one. This one is built up of 256 pieces whit an area of 1100 * 1200 blender units (to put this in perspective, the main player is about 1 unit)
if you run around all of the land it will take you about 30 minutes, and then there is allot of water on the map to.The map currently holds about 40.000 items, many of them whit collision.
This is done by loading the items on start, building lists and having dynamic spawns of all collision-boxes that are needed.
all of the floras (mushrooms/flowers/etc…) can now be picked up.

There are still allot that need to be done on the world (improvements/corrections/etc…) but here are at least an video of what it is currently locking like (the recording is giving me some lagg/delay):


We also got 2 new team members p.proj and Magich have now joined the team! Welcome!

Well thats all for now, hopefully next update wont take as long as this one did!