I’m making a short video that follows the story of a shadow operative that gets caught up in a mess of trouble and its his job to clean it up. For those of you who do know what X-Com is, its an old PC game that was released in America as X-Com: UFO Defense aka UFO: Enemy Unknown in Europe.

Work has started on the main character himself, but I’ve almost finished one of the featured weapons that will be used. Actually there is several models that are almost done and I will get them out as fast as possible. 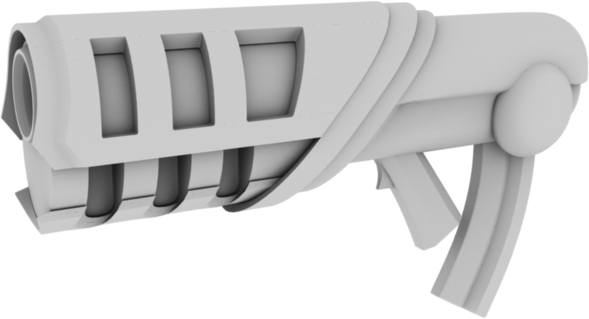 Just a suggestion, but you may want to extend the rear of the gun back a bit, because the magazine looks really close to the grip, and you might have issues with the chacaters forearm going through it, or looking ocward holding it. Some basic sites might add a bit more realism to the gun as well. But it still looks pretty cool, good job.

Thank you for the suggestion r6srider I’ve moved the grip forward instead of extending the back which would have ruined the ascetic of the gun. This is a alien weapon from the game and as far as I can tell the aliens never used sights, not sure why they were just crazy like that. It’s not suppose to be realistic in the first place (I’m trying to stick to the lore of the the game with a little flavor added) here is a pic of the gun from the original game.
http://images.brighthub.com/89/3/893d35592f4ff9fc9459c3b97097e11a96dc4a04_large.jpg
I have no clue what half the crap hanging off that gun does or why its even there so I just improvised.

Also thanks for the suggestion about the sights, but instead went all out with an attached scope. I figured once humans got their dirty little hand on the weapon they would add some type of sight on it. 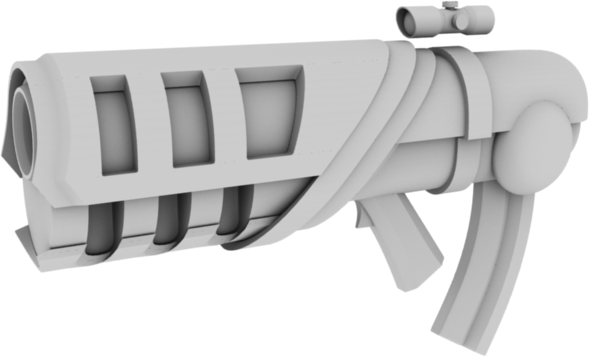 Looks good, and I like your version of the mid section better than the original, and the scope looks great, can’t wait to see some textures, but thats down the road, no rush.

Progress has been slow and there is still ton to do. For the lighting in the scenes I’m planning to use light effects to create the illusion of a comic book feel while still keeping the models and textures realist looking. Will not be using textures or shaders to create the cartoon effect. I;m new to lighting so I wasn’t able to do much, but i managed to render out two test scenes to set the overall feel of the video.