Hey man did you see my post about the clouds? I made you an example.

Just saw it. That’s awesome! I’ll add it in today. Should look really nice with the texture I’m currently using.

I reached my first stalemate where I felt like the game just wasn’t as fun as I wanted it to be. The game seemed to be becoming more of a slow 1st person sidescroller than the game I had in mind.

What I came up with was to integrate regular levels into the game and have the infinite play levels as transitions between levels. I also found an old project on another hard drive that I’m using for inspiration.

I made this over the course of a week (early this year) before I knew much about textures and optimization. I’m also thinking about reintroducting the robot, Z3N1, as protagonist in The Zenith Project. What do you guys think of the overall style? And how do you feel about 3rd person?

Started off by recreating a simple module kit to fit the same style. The kit uses only a normal map so I can adjust the material color. I should be able to make a lot of unique structures with this. The green texture is separate from rest so the color can change for unlocked and locked doors. 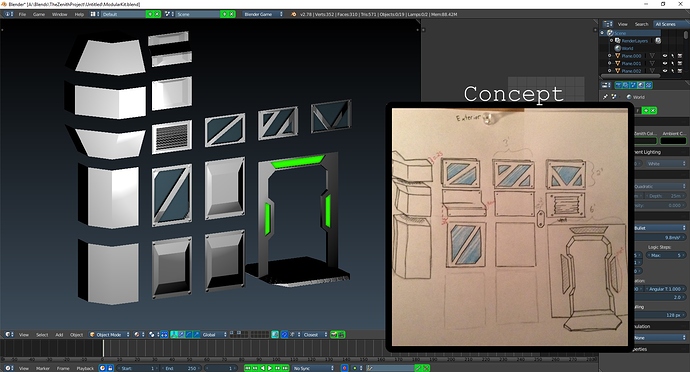 I reached my first stalemate where I felt like the game just wasn’t as fun as I wanted it to be. The game seemed to be becoming more of a slow 1st person sidescroller than the game I had in mind.

What you need is the input of another person playing the game. Many of my games go through one or two friends every couple weeks, just to check there isn’t something obvious I missed (working continually on a project means you can go ‘blind’)

You should also figure out what the ‘core’ experience of your game is. From what I’ve seen, it seems like it’s a game predominantly about movement: zipping really fast through relatively visible ad unobstructed levels. As such, adding things like the aliens detract from the movement because you have to … go backwards to be able to kill them in time (I suspect most players would simply dodge around them and continue - in which case they aren’t adding much to the experience). Because it is a game about moving forwards fast, anything that causes the player to go backwards other than getting stuck in a corner may be a detractor from the experience. Of course, this is based on my opinion about what sort of game you are creating. Yes you have a gun, but it’s use should be to clear movement space in front of you. It should be close to one-hit-action. I would almost suggest that instead of being a projectile weapon, it is a laser, and perhaps has the ability to interact with other objects (doors etc.)

Some ideas instead of aliens that keep the focus on movement:

Quick Diversion: I have a theory of ‘mental load’ - A player has a finite mental capacity, and the game designer has to respect that. As such there are typically one or two core elements to a game. I like the zero-gravity 6DOF genre of game, and discovered that simply moving and planning in that environment takes a huge amount of mental effort. As such, the focus of a zero-gravity 6DOF game should be on movement, dodging etc. If the game favours attacking, puzzle solving or something else, then it frustrating for people to learn.

I like the third person. My critique with that is that the level is rather ‘closed’ and turning the correct direction is ratrher hit and miss. As a result, it may interrupt the movement. One possible solution would be to add arrows on the floor/walls at critical junctions.

Nice modular kit. One thing you have to be cautious about if you have a kit like that is the number of tiles it takes to make up a level. If you have more than several hundred, then you need some LOD system (and possibly not the inbuilt one either) to prevent the number of draw calls being ridiculous. Maybe make some sort of level making workflow that joins lots of the pieces together?

Thanks for the very in-depth response. That’s the kind of answer I’ll have to read again to get the most out of it.

I knew something didn’t feel right about the aliens. I think I’ll move them to the main world with more scifi elements. As for the modular kit, it is a bit vertex intensive. I made a few buildings and they came out to be between 600 up to 2,500 vertices which is definitely more than they should be. I think by making each tile twice a big aside from the doors I should be able to alleviate the problem. I’m going to work on the kit some more today. I’ve thought about using just a single LOD silhouette for very far away buildings.

Would you be interested in demoing some of the levels? I’ll try to organize everything into a zip.

So I’m planning on a serious rework. I’ll detail the things I have in mind later today.

First off though, what about this for a player setup. The constraints need more work, of course.

3rd person and the player can orbit the position of the weapon(s) around. Also I just finished up the character last night. I made it awhile ago, but lost the file and just found it. :spin:

Added camera rotation with a reset when the middle mouse isn’t clicked.

I don’t understand the upwards arrow on the reticle, and the arm seems a bit straight (a bit of a bend may be nice), but other than that it’s looking good.

The arrow on the reticle signifies when forward dash is ready. It disappears when it’s recharging. It made more sense with first person. I think I’ll keep it, but make it less obtrusive.

I was having a lot of constraint issues with the arm spinning wilding sometimes. I might have to go through some animation tutorials to try and find a better way to achieve the same effect.

I think I’m liking 3rd person more because it can give the game a little more character. From your previous post, you’re right there will be some movement issues I need to work on. I brought the player into a level and it was a bit tough to tell which direction the player should walk. I like the idea of adding arrows at intersections to help with this. Some large floating semi transparent arrows could be neat, and then I could use Nicholas_A’s methods of changing the opacity as the player nears.

Nice Game i really like the Mechanics u designed keep up the Good work bro !!!

So the game is definitely taking a different turn than when it started… I’ll try to recycle most of the assets I originally used. I ditched the guns and gave the robot laser eyes. As per sdfgeoff’s suggestion, a laser weapon will open many new environment possibilities. I’ve also played around with an orthographic camera as a possibility. It gave the game a more intuitive fallout 1 and 2 kind of feel.

My plan right now is to just get out some of the ideas and mechanics I want to incorporate and then refine them later on. I still want speed to be an important part of the game at certain times so I will add that back later on, possibly as a forward teleport.

I’m going to use this post to help me organize my ideas. I’ll update it as needed.

So let’s try something different aye… This game has already shifted gears and directions a lot. So why stop now. This WIP will be my own journey to create a game through multiple different ideas; some new, some old. I hope to ultimately build upon existing ideas, mechanics, and world generation models to reach a finite conclusion. The titles I may or may not use are merely codenames for parts of the same project.

My newest edition, codename Etherion, is an improvement upon my old world building model and, ultimately, the infinite style world I would like to create. What I would like to do next is implement a system of roadways to create a level path through an otherwise infinite world… This will allow me to have more freedom to implement some of the weapons and AI I have already created.