This is how we drive in India...

Without exagerration, this is the average traffic intersection in an Indian city.

Well… that got messed up…

Lol,that’s great. I drove all through South America once. It was just like that in the cities down there.
What a blast.
You can’t be a timid driver or the locals eat you for lunch…,…hahhaa

Look at the pedestrian at 0:36 on the right, holy shit.

Okay, so how many accidents are there each day?

Look at the pedestrian at 0:36 on the right, holy shit.

LOL,that was funny. That guy just walked on by, after getting sandwiched, like, “la te da”,
no big deal, just my everyday walk. Hahahaha and no hand gesture either.

Amazing that all those people are going somewhere.

You should see india’s streets during rush hours! its just “me before you, me first” there

That’s just absolutely crazy, I’ve been to Las Vegas and New York where the taxi drivers can be insane and that makes those places look absolutely orderly in their driving.

Heck it makes going through Wichita look like you’re riding a slow horse-and-buggy through a quiet amish town in most cases.:eek:

Fucking goddamn assholes you indians
Why can’t you invest in some fucking traffic lights?

I wish UK traffic was the same. There seems to be a much better traffic flow than using lights. The roundabouts we have are ok, but the latest government trend is putting traffic lights on them all. What a waste of our taxes. Build a roundabout to spend money and use up prime real estate then add traffic lights to spend more money. The loss of land of a roundabout and the lack of convenience of traffic lights. Either one or the other seemed ok, both is idiocy, but India seems to have it sorted.

The drivers seem to be a lot more chilled out than the nutters on British roads.

@FunkyWyrm,Interesting thought about whether traffic lights work or not. I would bet that adding traffic lights to the intersection in the video would create a huge traffic nightmare. It does seem that the traffic flow does work better (if not more dangerous to some) without them.

The video seems to show the lack of irate drivers in India. If the same situation occurred in the USA you would see arguments and shootings. We have or share of “nutters” here also. In fact, after one of our famous hurricanes, the traffic lights were out for days and the drivers freaked out and had arguments and fights constantly.

The video shows how it should be done. You show some restraint in allowing a few vehicles to pass and then you impose yourself into the intersection until you can move on through. Or, in the one instance, the big truck(and the buses), he just shows up and drives right into the intersection, hardly slowing. I guess size does matter…hahhaha 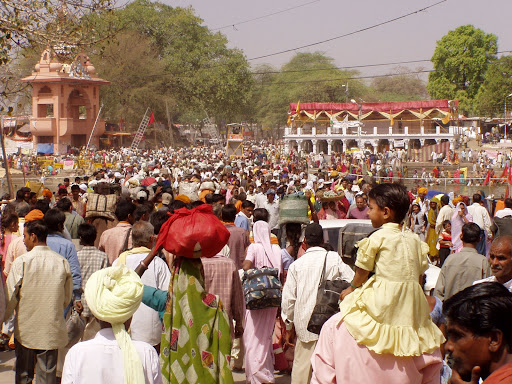 That was insane. I couldn’t stop laughing the whole time at the utter chaos. I guess its not a laughing matter but it was just so funny to see people just carry on business as usual in that.

No accidents! That takes some skill.

i have the right to express my views.
i know india and indians more than you.
And also about this guy goofbigthings
I will say the same thing again

i have the right to express my views.
i know india and indians more than you.
And also about this guy goofbigthings
I will say the same thing again

i have the right to express my views.

Sure you do. But you sounded like a troll in your last comment on this thread. Frankly nobody wants trolls around, so people report them, and mods have the right to ban people who nobody wants on their forums.

The whole time I watched this I kept thinking what a great screensaver it would make. All those little cars getting hung up and each time wondering “how are they going to get out of this mess?”

I remember reading (I think it was in Wired magazine) a while ago about research into decreasing accidents which suggested that certain amounts of anarchy/confusion at intersections might actually decrease accidents because it forces drivers to be more careful rather than placing their faith in dumb machines such as traffic lights. I suspect that this setup is much less efficient, though.

Regarding the lack of Road Rage, once on Car Talk (a popular humorous radio program in America where people call in and ask questions about cars) the brothers were talking about how people in Europe drive faster than Americans but they don’t have road rage, and speculating as to why that is. They concluded that Americans drive fast because they want to get where they’re going as quickly as possible, and Europeans drive fast because they like driving fast. It’s all a question of intent, really.