This Software Is Bloated, Buggy, And Not Fun Anymore

I quit using blender about 5 years ago because the developers seemed to want to make this think clean the house, catch mice, open cans of beans and every other task imaginable. In the process they constantly break shit. So I come back here 5 years later and find that it is worse than when I left. Why in the hell would anyone go into some area of the code that is as simple as Read Full Sample Layers and fk up the code? What kind of stupidity is going through someone’s pea brain when they go in and try to fix something that isnt even broke, dont check their own work, and then commit it to and official build?
There is a name for guys like that where I come from. We call them “Dip-shit”.
So then you try to let them know about their stupidity in the bug tracker and find out that they have made it difficult to even find a way to let them know that theyre retards.
Bravo blender devs! Youre a bunch of unfocused amateurs who’s ideas of grandeur just relegated you to the scrap heap of my computer (complete uninstall).
You guys need to get your shit together and stop acting like a bunch of six year olds in a hobby shop who cant keep your hands off everything you see.
Dont wory, I’ll never be back to make another rant or another post because this software just fkn sux.

Maybe you should try them.

Dont wory, I’ll never be back

We miss you too. Seriously, this is a name I miss around here. Do we have to part like this? Seems such a waste. Why end it like this? Burning bridges? I’ve been there.

Your statement, after cutting through the fluff, raises some casual questions. Like, what software are you using now?

Well, this was fun but you can do better than this. I’ve seen it.

Dont wory, I’ll never be back to make another rant or another post because this software just fkn sux.

Seems a bit of a waste to leave it 5 years to come back simply to post something offensive, so not sure of your purpose here at all. G’bye now.

There’s a lot of stuff in Blender. It’s quite hard to get it all into a program without it becoming a bit of a mess. A lot of the 2.8 re-design is to make it work a bit more like other programs - like the layers becoming collections, and a left-click select that’s not just reversing the mouse keys (my colleagues at work reverse the mouse keys - it means that on someone else’s computer you have to right-click the timeline which just feels wrong)

Some changes DO just feel like they are for the hell of it, like swapping the bar at the bottom of the 3D viewport to the top. I also don’t like user preferences being moved to the edit menu - which means this is no longer relevant: https://www.youtube.com/watch?v=W0QaZIL_acg

Also - even with whole teams dedicated to UI design, commercial softwares of the complexity of Blender still have steep learning curves.

In the evenings, before I go to bed, I often like to unwind by doing a bit of sketching. Came here and read this temper-tantrum, then I saw the name… RamboBaby.

I immediately knew what I had to do… 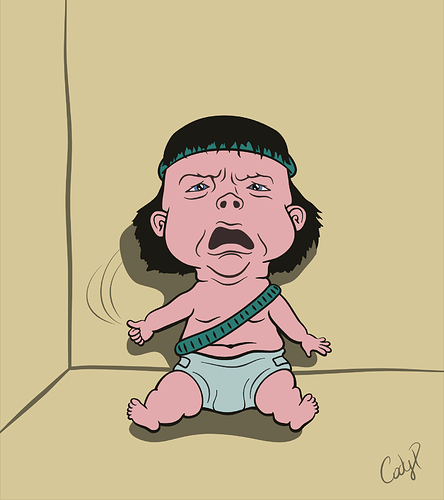 This is funny XD

Why have you done that?

I mean… it seems that you have some emotional attachment to Blender and since it’s not what you want you are angry with it, and like a small child you have a rant.

So then you try to let them know about their stupidity in the bug tracker and find out that they have made it difficult to even find a way to let them know that theyre retards.
Bravo blender devs! Youre a bunch of unfocused amateurs who’s ideas of grandeur just relegated you to the scrap heap of my computer (complete uninstall).
You guys need to get your shit together and stop acting like a bunch of six year olds in a hobby shop who cant keep your hands off everything you see.

You are accusing them of acting like a 6 year as old child when you are the one ranting because they don’t do what you want, I disagree with core devs in many things, and there are things I don’t like, well, I try to change them by my self since I don’t have money to hire a dev, but others don’t like some things and then hire devs to fix and add features, like Tangent Animation or Theory Studios, others find a way to improve it themeselves, like Bliblubli.

It’s absurd, I don’t know what other software are you going to use, but in our case, coming from more than 15 years of Autodesk realm at the studio we work many times faster with Blender, with it’s pros and cons taken, than with the other packages, we get bug fixes in a matter of hours or days, not months or years, and we adapt blender to our needs so… I really don’t understand your point, but since you are not coming back at all… fair well and I hope you enjoy your ride in whatever other software you may choose, and you find it funnier, nothing worse than working with a software you don’t like

I think exactly the same; aside from new functionalities, they always find the way to make something worse, and since the devil is in the details, to make things quite unusable.
Bad old defaults never corrected and with the impossibility to change them once and for all;
an always worse use of interface space with correlated options spread all around;
changes never requested, such as the new behaviour of the numeric slots arrows (now to increase an angle by one grade you have to hit the arrow ten times!)
And the undo system… I was among those asking for a global undo which don’t let to loose the work done, but now it’s even worse, you have not enough room to undo all the passes as necessary to reverse the editing, while the extreme slowness in the tweaking of parameters and in undoing actions remains.

And I could go on for hours …

Since Blender is free and open source, this rant is like me giving you a candy bar and you saying it sux because there aren’t any almonds in it.

this statement is stale and abused, now you should add “if you don’t like blender then switch to maya”.

Did I say that? No … I didn’t, and I wasn’t talking about your post. Everyone is entitled to their opinion… even you. Keep the personal stuff out of the discussion please.

This would be sweet if it was done in the newly integrated Grease Pencil feature in the bloated, buggy, and not fun anymore software.

nothing personal, really, just I tend to consider criticisms as constructive even where they looks as polemic since they can lead to improvement, and if others do the same they could get something.
Rerouting the topic on irony is not constructive at all.

Note to self: if you want forum members to reply to a question you’ve posted, put something that offends Blender in the title.

nothing personal, really, just I tend to consider criticisms as constructive even where they looks as polemic since they can lead to improvement,

Except, no. It’s hard to take “criticism” when it is basically childish behaviour. How can you take a persons pov seriously when they clearly have zero respect or understaning. How can one say that having given them what they personally want, they then don’t throw the toys out of the pram again, because, like the kid in the candy store, having been given the sherbet, they don’t want it now but want the lolly ice?

To be taken seriously, you have to at least present facts and reasoning, not whiny school-yard behaviour.

I think that sometime in the future things will get better… maybe with 2.93 or so… just a couple of years more. Life is a roller coaster 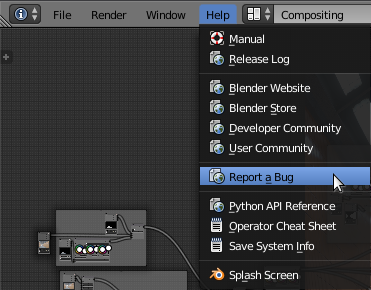 Looking at your comment history, I would say that you will be back only to troll at some later date, this is a waste of life my friend.

if one wants to be constructive, he can still discern the concrete criticisms from humoral outlets, and the facts from the way they are exposed, even if certain harsh expressions must certainly not be encouraged.
Although I agree that in the O.P. the facts are a bit hidden between the lines, however those who know enough blender and follow its development should have no problem recognizing the validity of certain claims.

Your answer is very naive, here it is not a question of bugs but of a bad design and senseless choices; have you ever tried to point out certain things to developers?