Thoughts About My First Model

Hi guys, recently I have applied for a job and they gave me this model to draw. And they also said it is not necessary to be exactly the same with this model, but it should look like this.

They give me 3 to 4 weeks to learn blender and model this unicycle, I tried my best, and here is what I achieved
https://drive.google.com/file/d/13WcCi_eQhltJMTtbrIy7BSr8tw7McKH3/view

So my meeting was today and he said that he didn’t like it, since I do have not much experience, I wanted to ask you what should I improve. The interviewer didn’t like the seat, the interior section of the wheel. Can you put yourself in the interviewers’ shoes and rate me up to 10, 10 is too good, 1 is too bad. So I can see how far I come. And also can you tell me which parts should be improved.

Finally, as a beginner I want you to suggest to me learning tips or practices to learn blender better.

Hello, just passing by, I wanted to see how you were doing after I helped you with the UVs the other day.

I have to say learning to do this unicycle in 3 to 4 weeks is extremely ambitious, I would expect a beggining 3D artist to be able to do that kind of quality after 1 or 2 years of constant training. If you are really starting from nothing, you did quite well on the modeling itself, but I won’t evaluate your job, as they didn’t give you a realistic amount of time to learn Blender. However, your file has a few technical problems.

So starting with the file you uploaded, you should first go into each material’s settings and set the “blend mode” to opaque. Alpha blend is for transparent materials and is causing glitches in EEVEE/material preview.

Now that we are seing the pieces better, lets go into edit mode, select everything and press “M”. this should bring the merge tool. Choose “by distance” and you will see that lots of vertices get merged, because a lot of parts actually had their polygons separated from each other, or maybe even had faces that were on top of each other (if things were that way when you made the UVs, it must have made everything very complicated). 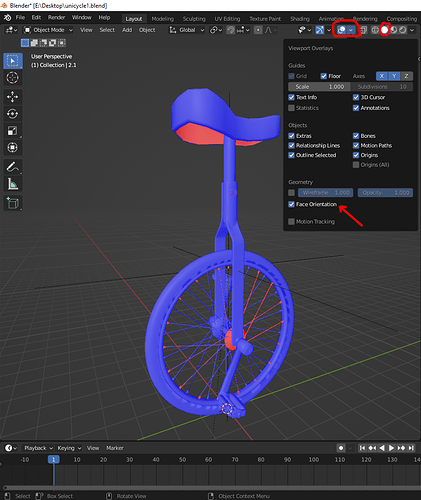 face_orientation876×1038 291 KB
As you can see, some parts show in red, which means that Blender considers that the faces are pointing inwards. This can be a problem for some features of 3D softwares that depend on the face’s orientation (like, if you go in material preview, you will see these parts look inside out, because “backface culling” is active and is skipping displaying inverted faces). Select all polygons in edit mode and press shift+n, this will recalculate the direction of the faces. Some pieces might still be in the wrong direction, so you would have to select them and flip their normals manually. However, you won’t be able to change the inside of the seat, because it has no thickness.

Looking at your other posts, I will assume you already know about “mark sharp” and “auto smooth”. But did you know the result of this (called the normal data) can be stored directly on the mesh itself? 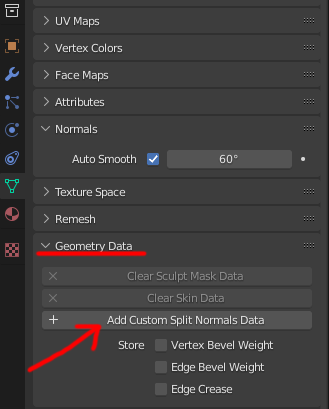 I say this because your model already has normal data on it and it looks weird and glitchy. If you brought the model in substance like you said, maybe it happened in the transfer? anyway, it’s possible to remove it with the same button.

Final part of the cleanup, go around the model and make sure there are no parts with polygons overlapping or crossing each other in weird ways, or parts with hidden polygons inside of them (ex: the inside ring of the wheel has polygons splitting it’s interior in 2 halves). Any area where an edge is attaching 3 faces together in a T shape could cause problems and glitches and is best avoided (ex: I have found some on the big screw holding the seat).

Ideally, all that cleanup should be done while modelling and before UVs/texturing.
Now that everything is cleaned, you will notice the final issue: the texture and UVs don’t match each other. It seems that somehow, the UVs got re-made after you painted the model and they now no longer match the textures, so I won’t try to evaluate your texture job in this state.

Finally, how to learn Blender? Well, that depends on what level you are at right now. I assume you are new to 3D in general? Did you follow a specific tutorial or course to start on Blender?

Hello, thanks for your evaluation.

Thank you so much for this wonderful compliment. And yes I did really work hard, nearly 10 hours a day.

So starting with the file you uploaded, you should first go into each material’s settings and set the “blend mode” to opaque. Alpha blend is for transparent materials and is causing glitches in EEVEE/material preview.

Actually it didn’t look like this, since I saved this as substance extension(GLB) it looked like this.

Thanks for this trick, I just learned it from you.

However, you won’t be able to change the inside of the seat, because it has no thickness.

I saw my fault here and will fix it.

, it’s possible to remove it with the same button.

Thank you I will try this.

I assume you are new to 3D in general? Did you follow a specific tutorial or course to start on Blender?

Actually, I have some experience with 3D max but I tried to learn blender in 3 to 4 weeks, I follow the tutorials that the company send me to learn it was about 20 25 hours of videos, I also got a Udemy course and follow some lessons on youtube.

Thanks for all your effort to help me, I am really lucky to find this site, without your (and people like yours) help I couldn’t have come this far.

Oh, It seems my comment was not fully clear. I meant you did well for 3-4 weeks, but the level of quality they asked (the exemple model they sent you) would need 1-2 years of training to achieve. If you keep learning with that much hard work, I have no doubt you will manage to achieve the same level, but your employer may have unrealistic expectations about how much time it takes to learn Blender.

Also, from what you said, it seems exporting from substance does put some weird settings on the objects!

oh I understand now. Nevertheless, what you said gave me the motivation to keep learning.

Also, from what you said, it seems exporting from substance does put some weird settings on the objects!