Hey, I have a pair of lighting questions here which would be very happy to be answered, So onto the point

1: Is there any way to get rid of that horrid white that lights cause when they are placed close to another surface? (I presume this is somthing to do with reflections)

2: How would you suggest is a good way to get a good ‘soft’ Lighting effect (e.g “The Chair” in the blender gallery) or could you point me to a good tutorial aside form the blender noob to pro?

P.S for one, please don’t tell me to put the lamp away from the surface, as the point of the question is not to do that.

Any help is very appreciated

EDIT: Another question!
I wanted to make a window in the same scene, I would like it if said window had a scene outside.
I have a nice little forest picture posted on the net as stock but when I make a panel and apply it as a texture it (Understandably) Looks flat.
I would love to know how to make it look a little less flat, again with “The Chair” From April Blender Gallery being a good example (Check out the window)
In addition, I have a third Lighting question - how do I make a window shadow as seen in “The Chair”

To repeat myself, Any help is very appreciated

In F5 buttons Lamps have an Energy and Distance setting, you can turn off Diffuse and Specular, Spots have Clip Start and Clip End and Bias settings… so many things…

I know about the F5 menu, so unless you’re patronizing me, thanks for trying.
I’ve poked around the lighting menu oh-so-many times, Turning on, off, onf, offn things, turning down this and that, turning up the other and the thingy but I can’t find anything good with fixing glare.
To be honest, I didn’t expect anything on getting a soft lighting effect, that’s all to do with skill so I thought I was gonna have to poke around with that, but I was thinking multipule lights and that friggin white really hinders me.
Thanks for the help, but it didn’t help an amazing amount.

I don’t patronize, it’s just impossible to be much help if I don’t know the Type of lamp, the relative Size of the scene and the Distances between lamps and Objects, the World settings, Material Shader settings etc… etc…

hey riomerc…
that was rude of u 2 say that somebody is patronizing you???:mad: i myself have received a lot of help from fligh and many others…this a forum man…lets be constructive…btw…u r inquiry was not full of details so how is anyone to know???

Lighting is really difficult and I think it requires a lot of time to get right. I wouldn’t be surprised if it took as long to light a scene as to model and texture it.

Hey Riomerc, that was rude indeed. Many times Fligh is the first to answer difficult questions in these forums.
Anyway, it sounds like you don’t have enough knowledge and experience about lighting. Lamps in 3D apps are far from physical lamps, unless you’re using photon lamps or something ( Yafray, Sunflow, Indigo).

In Blender and other apps as well a lot has to be faked. I think a good starting point is the lighting tutorial at http://mediawiki.blender.org/index.php/BSoD/Introduction_to_Lighting

You defitnely need to read Jeremy Birn’s book Digital Lghting. Check it out at www.3drender.com I kid you not, if you don’t have this book yet, order it today…it’s THE authority on the subject of lighting.

Hey, calm down, I didn’t say fligh was patronizing me, I was just asking, it just seemed a bit of a simple answer, besides, I was tired at the time of posting so I hadn’t considered details (Quite Stupidly)
More to the point thanks for the help rawpidgeon (Which may I note was the only person aside from fligh who actually helped me instead of flamed me, though toonjte did have a shot at it, further information?) I didn’t know about GI before, I’ll try it.
I’m a blender newbit so could you give me a little bit more detail about the filter options E.T.C that you described for the backgrouns?

As to add more detail, the scene isn’t very big, three normal sized cubes in the corner of a box made out of planes, laid end on end in this fashion

with a window above the horizontal lines, hopefully used to emit dust particles as in RL.
The kitchen scene in the end will have a cooking stove and a fridge at the end of the horizontal line
I’ll grab a test render and slap it online in a sec.

Also, it would be appreciated if anyone could describe photon lighting a bit further to me.

Ok, So that’s baisically the scene, the box it’s contained in is much too big for this actual scene, which was only because I didn’t know how big it was gonna be until I begun work on it and found out it was far smaller.
As you can see i’ve done some baisic texturing on the drawers, and that in the background as you can see is my window scene, a bit lush yes but it gets the job done.

So, there’s extra detail, clearing of this supposed “Rudeness” and even more questions.

P.S I’m NOT buying anything yet, I want to learn for free (Which is why I got blender in the first place)

You seem to be lighting from the ground up - is that deliberate? The picture you’re using outside the window should be further away - if you looked out of a window from that angle it is very unlikely you’d see much more than the ground just outside. The filter option is in the Image pane of the texture buttons window (F6). Increase the filter to blur the image.

I’m supposed to be working but am bored, so I tried to recreate your scene with some more interesting lighting. I can post the .blend if you’re interested. 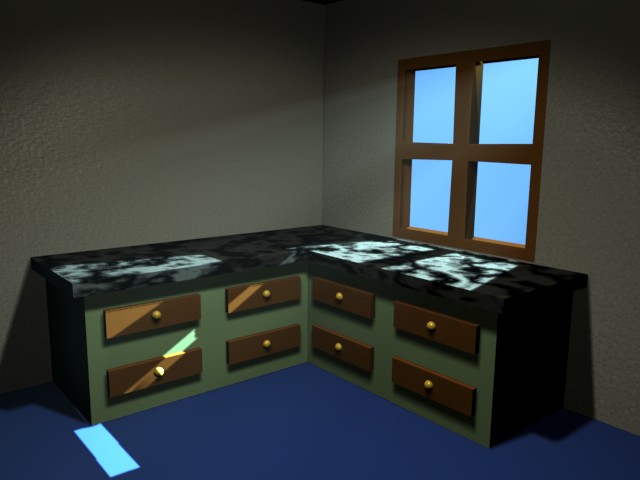 Hey, don’t sweat the rude bit. I understand that not knowing the in’s and out’s it’s impossible to know what to ask; and once you know what to ask there’s no longer a reason to ask. On the other hand though, what seems at first to be a ‘lighting problem’ could be something as simple as the wrong Hardness setting on a Material Shader.

Here are some more links that helped me:

P.S I’m NOT buying anything yet, I want to learn for free (Which is why I got blender in the first place)

OK, I feel ya. But believe, just take a look at some of the sample pages on Amazon and you’ll defitinly will see that this is a gem of a book. You’ll learn in a week what you’ll be struggling to learn in years.

Real light models (i.e. desk lamp, etc) are pure decorative. They don’t light the scene. They glow and light the immidiate vicinity a little. The illusion of real light coming from light bulb and such are nothing more than a combination of Blender lamps lighting up your scene.n

Maybe you think that all this faking sucks… but even Pixar has light setups with something like 50 carefully placed lamps to light up scene that physicaly is giving the impression that the light is coming from ONE single light bulb and from the window.

I like the re-creation, could you tell me how in the world you did the light FX from the window? that’s more or less what I was looking for.
As to the question of re-creation, improving and sending, I recline your offer as this is an exersice for me to learn the ways of blender, so don’t bother unless you want to show me somthing or you want to skip a few minutes of work

@fligh: Thanks for the lighting tutorials, I’ll most certainly look into and use them.
@toonjte: I’m NOT buying anything >< (lol)
@All of you in general: Thanks for the proceeding help, I am in your debt.
Also, are there any really, REALLY descriptive tutorials on Yafray options? there’s alotta stuff in there I can’t or rather can’t bother to work my mind around.

Disclaimer: If there was anything offending, rude, retarded, or just downright uselessly useless in your personal opinion, go and F**K youself.
This disclaimer covers itself and all future posts by me.
I hold no responsibility, it’s society’s fault.

You defitnely need to read Jeremy Birn’s book Digital Lghting. Check it out at www.3drender.com I kid you not, if you don’t have this book yet, order it today…it’s THE authority on the subject of lighting.

Thanks for the heads-up… this book looks great.

Disclaimer: If there was anything offending, rude, retarded, or just downright uselessly useless in your personal opinion, go and F**K youself.
This disclaimer covers itself and all future posts by me.
I hold no responsibility, it’s society’s fault.

Wow, just shutup already. I’m surprised any one is even helping your lame ass.

Ever heard of google? all these tutorials and more can be found easily and it would prevent me getting angry at some selfish little kid.

There are things called manners. Don’t expect to go very far without using them.

Another useful resource is RTFM n00b

Now go away before i taunt you a second TIME!

(Sorry Moderators, Delete this if you must. It just had to be said.)

“Lamp” lights are evil, and you really should avoid them as much as possible. Think about where the light is coming from, as opposed to attempting to evenly light the scene. In your scene, it’s broad daylight, so I doubt that you’ll have any light sources inside the room itself (unless you enjoy wasting electricity).

Download yafray, read some tutorials, turn GI on and put a large area light outside the window, facing inwards.

And as someone mentioned above, why’s the light on the ground?

Ps. If you’re wanting help from people on a forum who are more experienced than you, you have to expect being patronised. Don’t be so rude. It’s unecessary. We’re doing an altruistic deed by helping you here, so stop being so arrogant and ungrateful as to start swearing and shouting at us. Get some balls.

I think the expression is: “grow some balls”

I think the expression is: “grow some balls”

Oh yeah! WHOOPS! That completely changes the whole essence of my post. I must appear to be a complete fool now.

“Lamp” lights are evil, and you really should avoid them as much as possible.

I very much disagree, lamps are great, though mainly when used with ‘Quad’ on, and ‘sphere’ to control their influence. Especially when you use little small ones as negative lamps for making contact/corner shadows. Of course maybe that’s not a beginner’s technique, and you need to know how to use them, but they can provide a lot of control and subtlety. For example, apart from a couple of spots for the shadows, I lit the ‘tile room’ ({1} {2}) in elephants dream (along with many other sets there) almost completely with sphere lamps.

BTW. I post this hint here mainly for the information of the other people in the thread. I hesitate to post here due to the attitude of the original poster. Swearing and being rude to people is not a good way to invite people to do you a favour. We’re happy to help, as long as you act with common decency and respect.

I think I know what Naive Amoeba means. A lamp is not meant to light a Suzanne floating in the dark. It looks cheap. Lamps have a lot of uses. I see them more as a means to tweak the light rig of you scene. Of course they have other uses too.

Tweak till you’re a geek…