I’m titling this “secret coffee shop” for now but don’t worry…I’ll re-name the thread and be more open about the final end-game here when I’ve got more work done on the actual shop. Right now, what I could really use is for someone to go into the actual shop I have in mind (they’re a chain, there are loads of them) and take some reference photos. I could just model as I go, claiming creative license when needed and come up with something OK…but I want this to be as realistic as possible and true to the actual shop. Anyway, I digress.

Here’s an early render (still a W.I.P.) of one of the tables with chairs for the shop. (Btw, the purple/blue strip of tile at the far right is there for my reference purpose only, I’ll be laying some wood panelling there.) 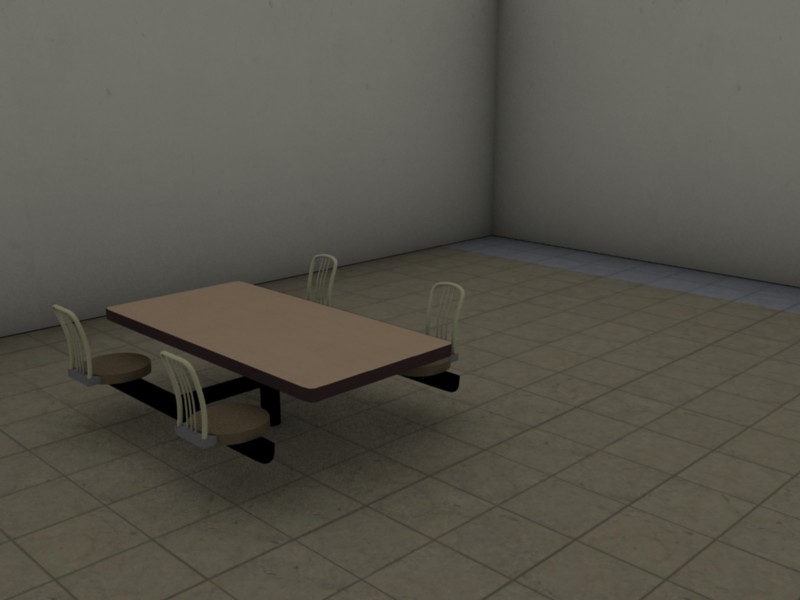 Go on, bung some lights in there. All my gloomy little monitor can show me is a silhouette.

Silhouette looks fine though. Slightly surreal - like someone’s about to sit down to dinner inside a shipping container.

Wow - more than a week later and that’s the only comment?? :eek:

OK, here’s another early render, I’ve done progress on it since, adding racks and some inner materials etc., I’ll post another render after some more feedback. The discerning eye will probably guess what kind of coffee shop I’m working on here, after seeing the render attached to this post.

Your comments, thoughts, posts etc are welcomed and appreciated! hugs Oh, to evilkillerfiggi, I haven’t begun to fiddle around with specific lights yet. Trust me, the final project will have extra-sweet lighting. I’m concentrating on modeling things for now, and letting Ambient Occlusion take care of light until I can get down to specifics light-wise later on.
Fondly, Well, there’s not a lot to comment on. I think you might be kidding yourself that someone’s going to recognize the shop from the silhouette of the table, and offer to take pictures for you. You might have better luck naming the shop and asking outright. You gain nothing being coy.

It is dark, as well. Even though you are planning on working the lights later, putting in a sun lamp and a couple of hemis and aiming them in the general direction of the center of the room costs little, and would allow people to actually see your modeliing work, so they could comment on it. Or, turn the energy value in AO up to 2 or 3.

Really, Rachel, the guessing games (not your fault) have been way overdone around here and now they are just annoying. If you want help in getting realistic details of a specific chain of coffee shops, you’re going to have to name the shop. That’s the point, isn’t it? Having extra eyes to catch something you might miss from staring at it too long? Help us help you.

Alright, well even though you seem a bit cranky in your post (and I apologize if I’m misinterpeting that hon, I don’t want to be a jerk or anything, far from it), thank you. I’d like to clarify some things. I can see how it might have been misinterpreted, so for the record, I wasn’t asking anyone to take any reference photos for me. I only meant to say how it would be nice to have some, though not necessary. I’m sure I’ll be able to take some of my own soon enough, I practically live in Tim Hortons, lol, and while not always ideal for my purposes, there are already some such photos online.

Secondly, what is wrong with your eyes people? The only way I can possibly imagine you people seeing nothing but a “dark silhouette” in either of the first two renders is if you’re still (gasp) using clunky old CRT monitors that are slowly dying. When I finally got a proper monitor (the NEC MultiSync 90GX2), I was amazed at all the details and so forth in pictures and more that I’d never even seen a hint of on my old clunker monitor, because of its dying ability to display things. Seriously - these are perfectly visible. At best, it’s a matter of opinion & personal preference. Looking at these side by side, yes, the normal one is darker, though hardly a “silhouette” for goodness sakes.

However, here are two early renders, one with a hemi and one without. If you ask me, both the Hemi and/or ramping up the Energy of the AO as you suggested give a crappier result, too much glare, bad shadows, some subtle texture details are lost. That’s just my opinion. There’s probably gonna be about 100+ separate lights when I’m finally ready to complete the shop though, just so you know.

Here’s the renders, first one is normal, second with a hemi.

As to the ‘guessing game’ over the coffee shop - my apologies, I wasn’t trying to tick anyone off! I’m actually a little surprised at how irritable you seemed about it (though again, apologies if I misinterpreted you, you did say ‘not my fault’). I rather thought people would enjoy guessing, y’know, make it fun. But OK, guess I was way off with this crowd. I certainly didn’t expect anyone to guess anything from the chairs & table, lol. The backs of the chairs are actually not the kind you find in a Timmies anyway, which I realized after taking a day to model & tweak them. At that point I wasn’t gonna start over with the chairs, lol. Anyway, OK. Any Canadian would take one look at the second render I did and know that this is a Tim Hortons coffee shop in progress. Now, you all know.

One last thing: the walls are simply placeholders - some Timmies have at least two walls that are largely glass, and this one will too. Thanks in advance and let’s make peace, Orinoco! hugs 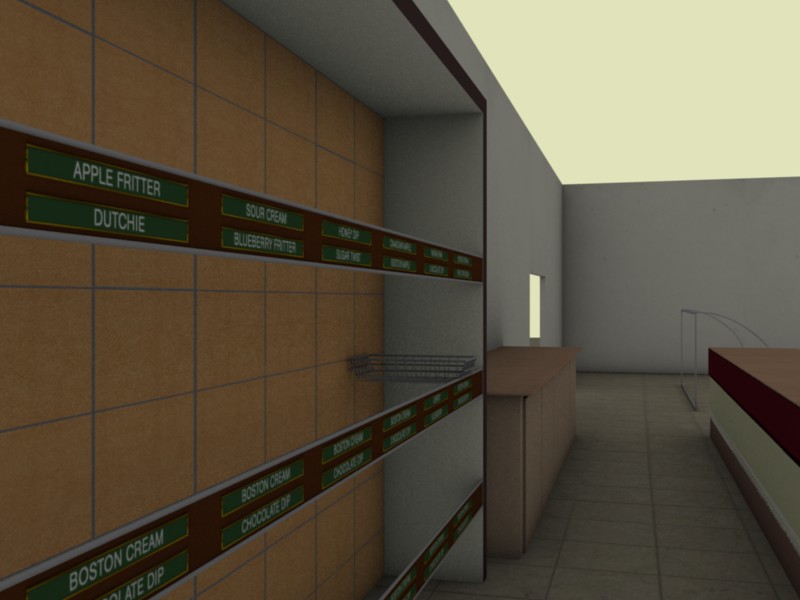 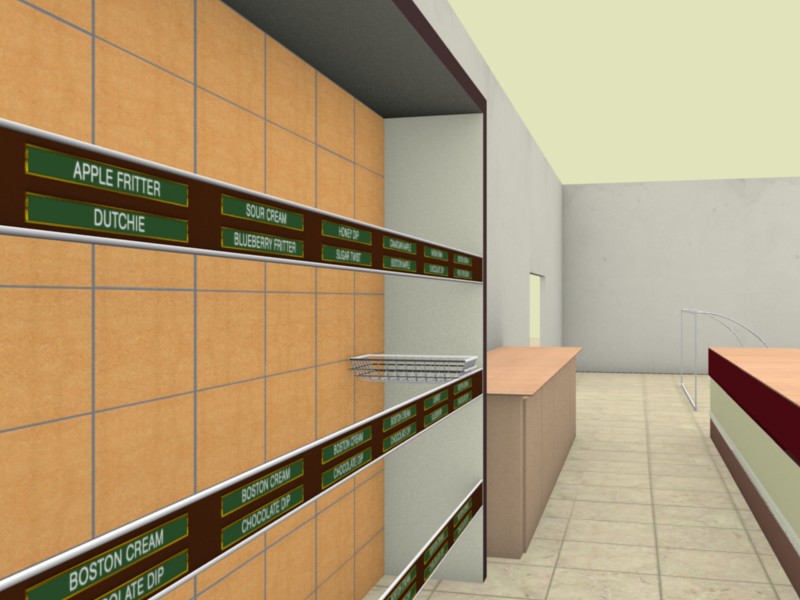 Rachel, you aren’t the first person to say I sound cranky and I doubt you’ll be the last. It’s probably my word choice (or lack of coffee) and it’s something I’ve learned to deal with (mostly by ignoring it.) So don’t worry about it.

As to lighting: don’t assume everyone has the latest and greatest technological stuff. There are still a lot of people out there who are using CRTs, and, believe me, on a CRT screen, it’s a silhouette. Even on my latestest fancy schmancy flat screen, it’s pretty dark. So I can just imagine what it looks like on my discarded Color CRT that I got second hand when some company upgraded their monitors and is now recycled into someone else’s system. Thing must be eight - ten years old, and definitely not as bright or sharp as it used to be. I’ve actually seen people publish two renders, one for CRTs and another for flat panels.

Taking a look at the two attachments, there is a lot more visible in the second than in the first. Obviously, the lighting is poor, but the low light render flattens a lot of detail that is visible in the bright render. But the point is – you aren’t working on the lighting yet – you’re working on modeling and texturing. So, to get feedback on the modeling and texturing (at least, the part of texturing that’s not lighting dependent, like scale and stretching) the lights must be turned up so people can see it.

I look on BlenderArtists as if it were a studio at an art college. Everyone is working on stuff, and we show fellow artists our creations, comment on theirs, share techniques, and point out flaws that others overlook through a too-close association with their own work. Sometimes we gather out in the hall to shoot the shit about non-art related matters. And, there’s a gallery downstairs where the really good stuff is placed for public display.

So when I take a break from my own work and go wandering around the studio, and look over someone else’s shoulder at their easel and say, “hmm, interesting, what is it?” and they turn around and say, “Guess.” I feel like I’m being blown off, and it’s annoying. Now, it’s not your fault because you are the latest in a series of “I’m not going to divulge this secret information” threads, and the irritation tends to build when people don’t take the hint that they are among friends here, or, at least, among fellow artists with their own work, and not people intent on ripping off the poster’s singularly creative intellectual property. [/rant]

I’m fine with making peace, but really wasn’t aware that I was involved in anything else. A personal failing, no doubt.

Aside from the walls, which are placeholders, the modeling and textures look good. The only thing I’d question is the boards with the names of the goods. While I’m not familiar with the Horton’s chain, it just seems that they would have some more support than just at the ends, although perhaps that just hasn’t been modeled yet, or will be covered up and not visible.

[edit] BTW, why not ask for photos? You might get lucky. Some one may know an employee there, or hang out at one and be friendly with the manager. Although we have different ways of going about it, most people here try to be helpful. [/edit]

Thank you for your very kind reply. You made a lot of good points here, and I appreciate them. hugs I especially liked your analogy re: an art studio in a college. Very apt and bang on.

Tim Hortons coffee shops (which also offer donuts as a mainstay) are a Canadian icon really, you can find a Timmies on every block practically across this great land.

As to the boards with the names of the goods, yes, the supports for them will be added soon. The metallic ‘basket’ thing will be re-angled to rest on these supports once done, and also have lining papers added - and of course the actual donuts (a project in and of itself, to get them to look just right).

As to photos, well I plan on going into a Timmies soon to take some of my own, so it’s all good. I have searched through Flickr though, and found some photos that were partly helpful for reference purposes, though not many. Anyway, it’s all good. I’ll snap some goodies.

Here’s another early render, showing the trademark signature logo. In real life, the sign is based on Tim Horton’s autograph, so searching for a Timmies font is a search in vain, because there IS no font. Meaning I had to trace this very slowly and carefully, adding faces etc., for quite some time. It took at least 9 hours to complete. But worth it, I think!

The render is with the Hemi too, for the sake of those with crappy monitors, even though I still prefer it without.

I’ll post more soon, all. And as always, your comments/posts are always welcome. 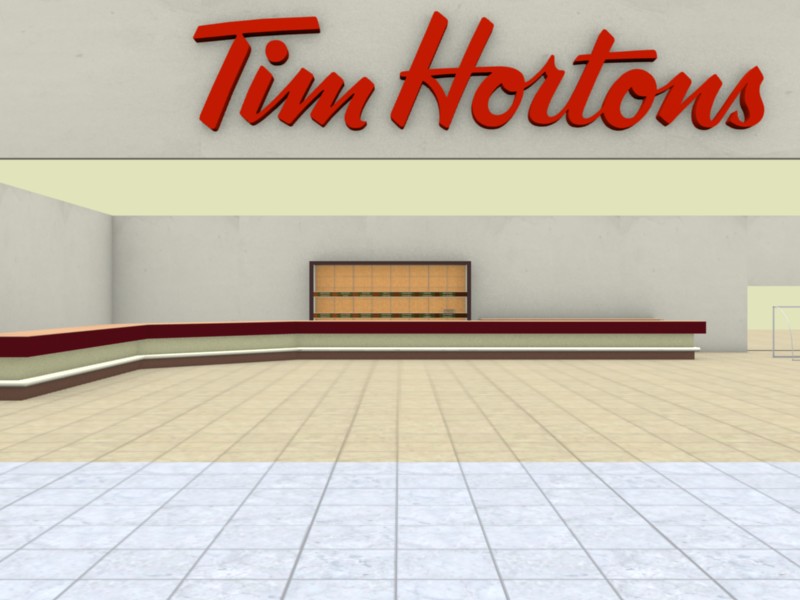 Wow. The sign looks really good. Much like the real thing.
How many people here have heard ‘Gimme my Timmies and no one gets hurt.’

Just finished the baskets and liners, and racks for them to rest on. Rendered with Blender. FIrst image is 800 x 600, second is 1920 x 1080. Still no change re: lighting but should be easier to see with the Hemi turned on. The name-plates for the donuts need to be properly rearranged, too (apparently about five busloads of schoolkids are coming and they all want Boston Cream & Chocolate Dip, at this point - lol). Enjoy! :yes:

Second image was too big to paste right into the post, here’s the link:

Too many Boston Cream and Chocolate chip signs…
Just kidding, it looks like you are putting in a lot of detail on this piece. It is looking good.