If I’m doing a timelapse of some footage I took with a camera, is there any way to remove frames from in between the individual frames so that it will maintain a lower fps? (and therefor a smaller size after being rendered)

Import all frames then add a speed effect. Blender will discard frames to speed video up. Try to evenly divide speed into frames per second this avoids weird skipping of frames during playback.

I’ve never done this, or even diddled with the frame step settings under the dimensions tab. But could you use this to skip X number of frames? 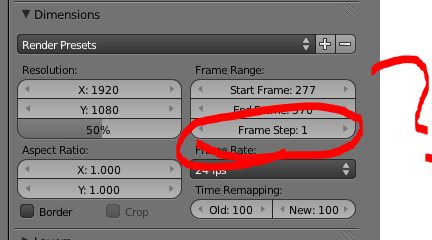 Yes you can but it only seems to work at render time, so you cant test it out first. You still load the whole clip in however.

Then what does the “time remapping” do?

A quick look at bug tracker suggests that this is a buggy feature that may not work as expected. It seems to be designed to speed up playback of scene globally, for fine tuning animations in 3d. I really think that a speed effect strip would be of best use here.

Yup, 3point edit is right. Speed effect is the way to go.

In this tutorial about making fake HDR I have done some speed effect strip work. Check it out it may help.
http://blendervse.wordpress.com/2011/12/28/vse-hdr-quick-and-dirty-8bit/

Time Remapping worked OK in 2.59, though I haven’t tried it since that version. It’s purpose is to change the elapsed time of all animations in a scene on a global basis, at a specific percentage set by the parameters used. This can effectively change the FPS of all the animations at once, for times when you need to have a sequence available at more than one FPS. For example, if a sequence is created with 300 frames at 30fps, that’s ten seconds of animation (300/30). At 24 fps, it’s 12.5 seconds, so it would run slower without an adjustment. Setting Time Remapping to Old = 300 and New = 240 adjusts the effective timing of the rendered frames so that the animation at 24fps will now last only ten seconds, but without changing a single keyframe. It is extremely useful in this regard, and other uses where the overall timing of all animations has to be fine-tuned.

I’m not sure whether it can be used with the Sequencer in this fashion, however, I think it’s designed more for keyframed Actions. As mentioned, the Speed Control strip is the better way to go in the Sequencer.

Ok, well thanks everybody for the info and assistance! Much appreciated.