I’m going to make a post here before i get too much more frustrated about this :spin:

i’m making a character for animation and i have been spending much time on it. Today i finished the retopology on a hand sculpt and i would like to reconnect the hand to the arm.
but… The arm’s cut section has 16 Verticies, and the Hand has 19…
The hand would be really difficult to take out some verticies, and the arm would loose it’s smoothness if i started trying to add in all these loops that would make the geometry uneven… x: 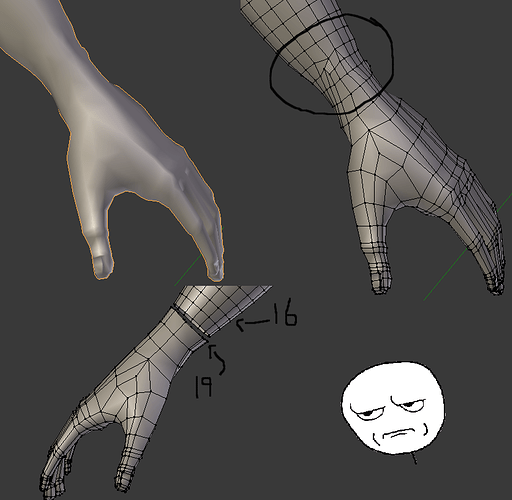 If i want to remove 2 vertices of that end, and keep only quads i’ll have to rework it like this by example : If i want to remove 1 vertice only, and keep only quads i’ll have to rework a part of the topology like this by example: So with this kind of rework, you should be able to lower the hand bottom vertice count to match the arm without triangles added.

I think the best solution would be to remove an edge loop to your hand first, so you have 18 vertices instead of 19 , then you can use the 1st example to get down to 16 , as this example would not force you to add a loop like in the 2nd example)

So… i can’t exactly say i know what i did, or that this is exactly… solved?
but after messing with it here’s what i managed to do. 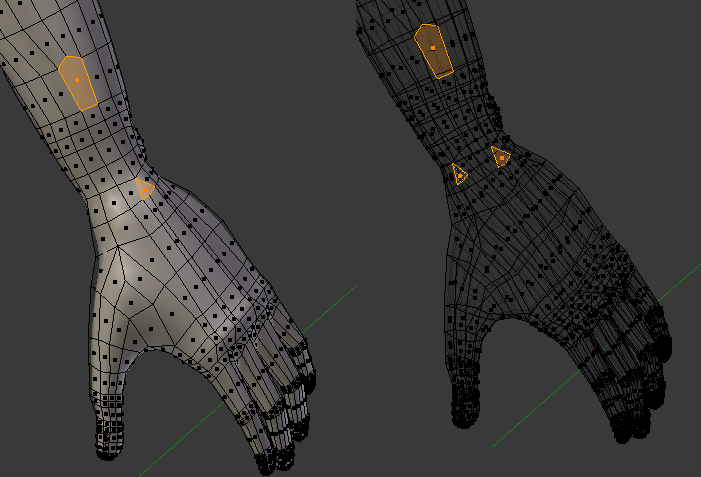 There are 2 spots where i made edge poles i think they are called? and then 1 triangle

But i placed the triangle into a space where no deformation will be happening and i smoothed it a few times.

So i think it works. i just wish… i kinda knew how it worked or if i could get the triangle out

I think we just posted at close to the same time.

But that is amazing help! thank you so much! : D
i’m definitely saving those examples : D

It worked perfectly! i love it : D

Lol this looks like some nightmare out of Math class but it was to help me this time! xD 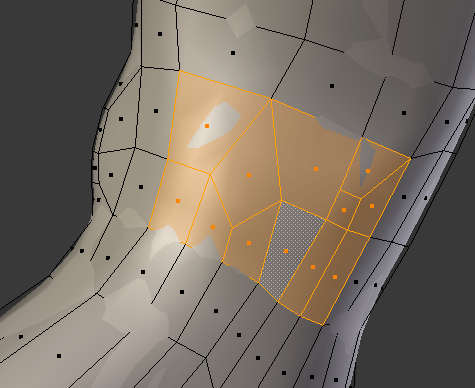 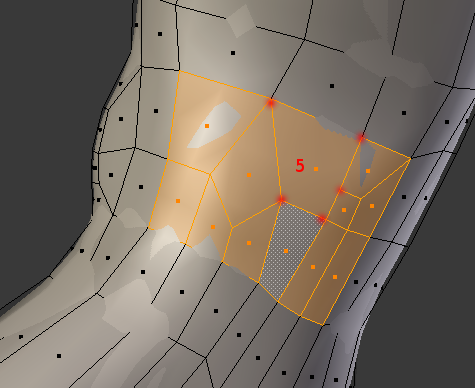 Thanks for pointing that out

Let the computer show you information of tringles, quads and ngons in realtime, Meshlint -addon.
It also selects them for you, if you want.