When people talk about Japan, they usually talk about anime and / or manga. Usually, it’s anime.
Anime is terrible. It used to be okay. Now, it’s not. It’s inbred trailer-trash in entertainment form: Every season’s new Japanese animation places one-upmanship of every single aspect of the last season higher on their list of priorities than even “make something entertaining.”

The same can perhaps be said of all Japanese entertainment, though it’s not relevant anywhere else as much as it is in anime. Anime used to answer the questions of kids’ dreams: “How awesome would it be to be a world-class assassin / kung-fu master / robot pilot / baseball hero?” Now it’s just a bunch of sh!t pandering to perverts and pedophiles.

Anime heroes used to be people with amazing job descriptions; now they’re reasonably young men who find themselves miraculously sharing houses with a dozen girls aged six to nine, accidentally almost touching every other scene. Or else it’s just guys with huge hair and impossible weapons shouting jargon. Long ago, manga aspired to be like Dragon Ball Z: graphically iconic, with a story more coherent than it probably needed to be. Now there’s the ADHD-addled Dragon-Ball-Z-inspired One Piece, a manga for the Twitter age if there ever was one.

Don’t even get me start on the snobs in the USA that have to watch every episode in “Japanese”. Even if they do not speak Japaneese.

Could you imagine if the USA got caught in the Magna rut? Every single cartoon made after 1989 would looks like this: 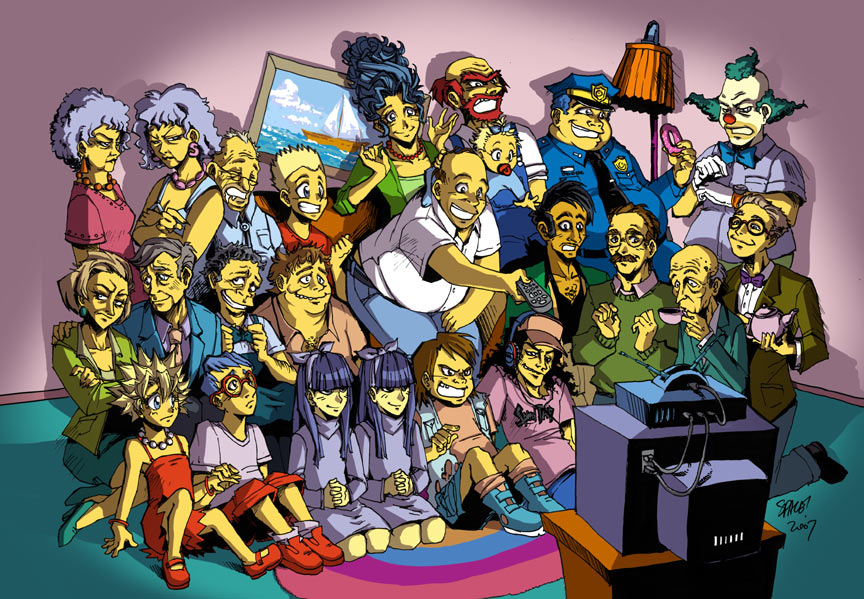 I love to say that I am a manga fan, but sadly my favourite manga is Lone Wolf & Cub, and then to lessor extend Miyamoto Usagi, if you can call this manga. I have browsed many a manga section of the local bookshops and so far nothing so far has gripped my attention span. Apart from the splendid visuals these new genre have brought, I just empathasize with the characters. They are all out to slay demons who in turn slay villagers in some ways that shouldn’t really be possible if even allowed by physics.
Now that I am working on my own comic (in panel three out of a possible 1000!) I can appreciate that a good storyline is important.
Oh . . . there are also some good american comics too. But I’ll save that for another post.

Anime’s not bad. -maybe the few good you saw spoiled it for you, but personally I haven’t watched the stuff in ages. It used to be a social thing for me. I’d watch it with friends, and since no one’s got time anymore, I hardly watch it. -it got a conversation going, as for what it’s become: I’m not complaining. It’s probably to the newbies what it once was to you.

It is a sign of our times, even worse there are no more Kubricks, Kurosawas or Fellinis

Miyasaki is still alive, but the vast majority of current anime is crap

I would love someone to point me in the right direction, (with reasonable arguments) not to despair

Or we are just old farts doing our part…

Try watching some more serious anime. Most of the anime meant for younger audience is pretty much the same. Usually the way you described. In my opinion, there is nothing wrong in One Piece. I really like it. You should try Death Note. It’s fairly new and it doesn’t have the usual hero-type.

Oh and never, ever dub anime (or anything else in that matter). That’s like a kick in the sacks. Luckily Finnish people only dub commercials :).

I used to watch Pokemon a lot 5-10 years ago., but most of the episodes later on followed a few basic formulas, I admit the episodes had variety in occupations and culture, but I just got bored with it.

If they made an epic anime series based on Spongebob I may watch it (What, you mean you like freakin SPONGEBOB O.o)

this is like saying you hate all movies because Avatar sucked…

this is like saying you hate all movies because Avatar sucked…

There’s Avatar - the last air bender. This is being made into a movie now. It’s an American originated show . . . with an eastern influence. I was hooked on this and saw some episodes twice.

After Dragonball Z it all went downhill…:). 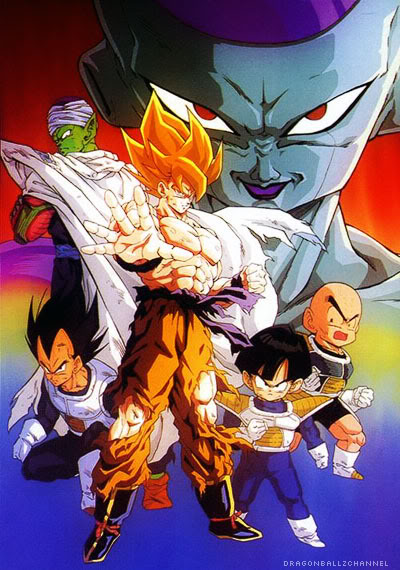 You lot actually watch anime? Isnt that shit for kids?

There are only about 2-4 good movies that is anime. All the series pretty much suck ass. And most of the movies as well. I think I can even write down the only ones that are good.

That is pretty much the ones that are worth watching. Everything else sucks MAJOR cock. Especially dragonball and pokemon and all that shit. Death note is a emo series, for goths and selfdestructive emos.

You lot actually watch anime? Isnt that shit for kids?
Not any more. I did for a while for “artistic inspiration”, but after about 20 shows it all starts to look the same.

as far as sexiness goes… Who the hell would prefer this:

I am a big fan of Heavy Metal magazine. It is not about music… it is about some really neat art.

They have everything from hand painted comics to CG rendered graphic fantasies. In america and some of europe it is NSFW, they sometimes have exposed women s breasts. and lots of gore in some cases. All in all though there is some really intuitive artists out there. Too bad studios choose to follow old mediums rather than try out something new.

The independent Japanese artists from around the internet have some really neat artwork, it is a real shame they do not share some of the limelight.

I’m OK that there are anime/manga but lately the 3D industry has gotten mangafied. Just look at the StarCraft 2 cinematics and tell me that they don’t look like that final fantasy 7 movie.

I LOVE anime! lol I’m just starting to get hooked on it. After seeing the show “Full Metal Alchemist” I was like “wow this is good stuff”

I’ve always loved drawing it but I never really watched any of the shows or read manga… until now!

I’m not sure how anyone got the idea thats its just for kids? Lots of anime I’ve seen has content that would be inappropriate for kids and there are some pretty serious anime’s…

It’s pretty stupid to say anime sucks when you have seen like 1 % of all the anime in the world. I think anime as a style is underrated. And like in any style, there are bad apples too. There are tons of series that are like 28 episodes long that people don’t know about. They just judge the whole anime culture after seeing just a few larger series like DB or One Piece. Go to the Mighty Internet and do a little search. There are a lot of sites that offer free anime and most of them offer these shorter series, which I think are better than the longer ones. They stop before it gets boring

Oh and I liked Last exile too. It was pretty different.

@Namssil
How many anime movies have you seen? Of course it’s all about personal taste, but 2-4!!! And I disagree with Death Note being an emo series. It’s pretty different from all the others. It’s a lot about what happens inside the character’s head. I think it was brilliantly done. Certainly not for “goths and selfdestructive emos”. I wonder where you got that from. Oh and you should see more anime and only then declare that all but few suck.

PS. Anime is not only for kids. It’s pretty ignorant to say that.

Studio Ghibli’s movies are great is sometimes a bit commercial. Hayao Miyazaki ranks with Walt Disney and I think consistently better. His second movie, Nausicaä of the Valley of the Wind, was innovativie and freaking amazing for it release date of 1984. Everything else from this era seriously sucked arse, except maybe for the Bakshi movies. I occassionally watch Cartoon Network/KTV and Western anime (animated movies duh!) sucks equally badly.

Long ago, manga aspired to be like Dragon Ball Z: graphically iconic, with a story more coherent than it probably needed to be. Now there’s the ADHD-addled Dragon-Ball-Z-inspired One Piece, a manga for the Twitter age if there ever was one.

if dragon ball is the standard you have been holding anime up than frankly it is a shit standard Dragon ball z is about the crappest cliched piece of nonsense I have seen. The are way better anime’s than that formulic toon; dragon ball z is dude meets nemeis, than the float in the air doing nothing while the spout some crap for about 3 episodes, than the following episode is a flash of fists and legs and people moving up saiyen levels until one is defeated, rinse and repeat. about the only dragon ball arc I watched and followed was the majinn buu one and that was it.

Not all anime is good just like not all western cartoons are good frankly in all forms of media the crap far out numbers the gems.

And it’s really amusing. Can someone name animes which are NOT over-hyped and totally overrated or just extremely famous?
Death Note is hyped and surprisingly nice, Ghibli’s movies are always great entertainmend, but the rest is just hyped. Not good, but good merchandising.

So yeah, I agree, all the stuff mentioned in this thread (except the two things from the upper paragraph) is not very good entertainment in my opinion. I don’t watch it either. But saying that Anime is bad just because of that is…far too simple.

Some examples for recent animes which are worth watching:
Dennou Coil, Guardian of the Spirit, Eden of the East, Ghost Hound. But these are just some of my personal favorites, not much older than 2 years.