entering this for the photo realism.
Is all about sweet this time 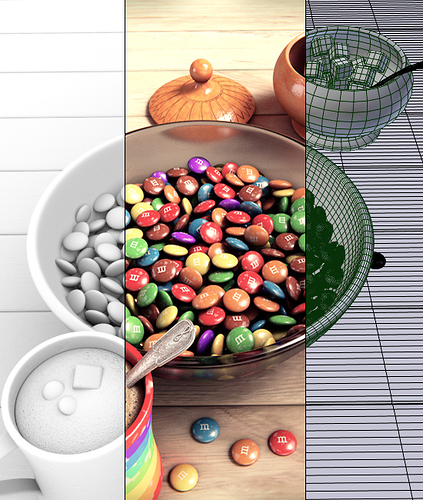 MnMs look great, but I see one major flaw in the realism; that drink looks more like frozen ice than a drink. Also, the points where the MnMs contact the surface of the drink is seamless, where it should actually have a couple of small bubbles breaking up the surface. Clay material is spot on and spoon has a cool pattern.

The image looks good. I like the M&Ms in the glass bowl and the cup of chocolate in the foreground will really be very sweet

But there are some problems regarding photo realism imho. I agree with Robert Banks. The chocolate drink doesn’t look like a drink. I thought it was a cup full of cinnamon, which would also match the theme. There are some M&Ms that are penetrating the glass bowl. And the bump of the spoon in the foreground is really strong.

I see that you used vignetting to focus and guide the viewer’s eye. But I must say that composition-wise there is no real focus object in the scene. The bowl and the cup both fight for the viewer’s attention. That would be much clearer in my opinion if you’d place the cup behind the bowl.

Other than that I really like the colorful image that you’ve created.

The m&ms are way too glossy, and the drink look frozen indeed. Aside of that, I love the scene, it as potencial

Hmm… as a render, I like it- as a photo, needs some work. The sugar cubes are disconcerting, in this bright of lighting they should be very white. I agree the M&M’s are a bit dark… but I don’t think that’s a deal breaker, it just adds to the feeling. The tabletop is very fake looking, I would suggest getting a higher quality texture and adjusting the shader a bit. The cup is also very strange… I don’t understand the specular… Anyways just a few of my thoughts… Good job on the lighting too!

Very good modelling. I can see that you used physics and particles system

How did you do the coffee foam???