Hi all, I’d like help and critique on this scene.

This is the most recent iteration. 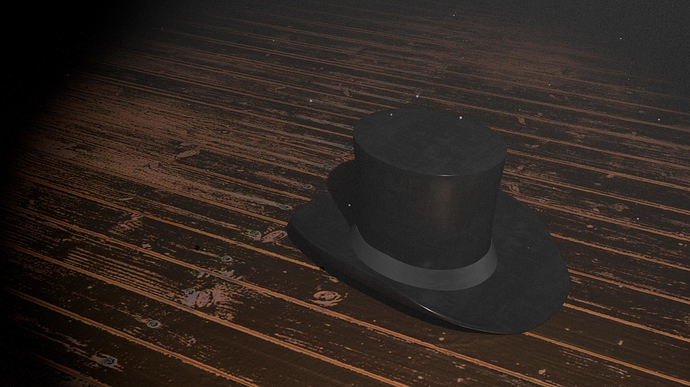 I’m trying to get a dusty, spotlight, old-looking scene. This floor is like a theater floor, I’m thinking old fashion theater along with the old fashion top hat. The floor is a standard Diffuse, Reflection, and Bump textures. (InsaneBump out of Gimp)
It looked more like a theater floor before I enabled volumetrics, here’s the shot with no volumetrics. 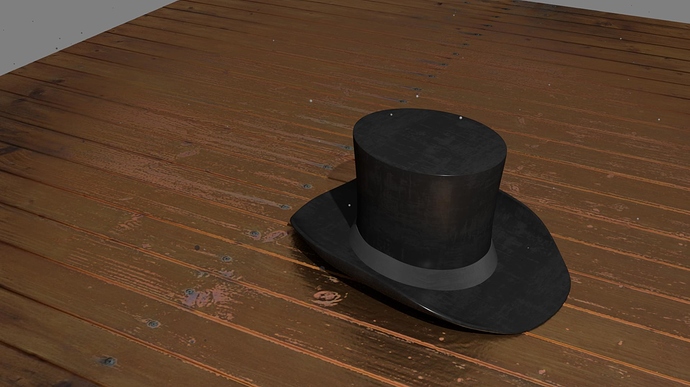 Those white dots you’re seeing is a particle system raining down particles which are tiny icosphere meshes. They are supposed to act like dust particles. In combination with the volumetrics and someone suggested I composite in some dust afterwards, it should look better. Also when I have the camera focus figured out they should blur into the foreground/background and add to the affect. I can never get the 3D camera to focus well.

The top hat material consists of this:

I mixed diffuse and glossy with a sort of dirt/stain texture to give the hat more detail, and it’s later mixed with velvet to help the look out some more. The RGB node is there to keep all the nodes on the same color.
I’m not entirely happy with this material, if you look at a reference of a real top hat (http://tinyurl.com/nuumbpy) you’ll notice two types. Glossy ones that seem to be flat, like plastic. And one’s that seem more clothy, like felt. I didn’t care too much which one I had, but I went more for the plastic look after trying a particle system on the hat to simulate felt. But mainly real top hats have a lot more going on than mine does.
The band around the hat is largely similar, with a bit more velvet mixed in and some minor tweaks.

I’ve got a spotlamp lighting this scene, set quite high, otherwise nothing can be seen, especially when volumetrics is enabled. My Volumetric Scattering density is at 0.003.

Tell me what you think, I could use some help. I’ll keep this thread updated as I move along with the project. I’m thinking about adding some cobwebs next, around the hat, to add to the detail and the oldness.

No update today, only got a small amount of time to work on it and am reworking the texture maps for the floor and some new ones for other objects. Trying to use AwesomeBump but it’s being a pain to calibrate.