I’m getting the reflections down.

Now if I can just get the surface to render like the subsurface. 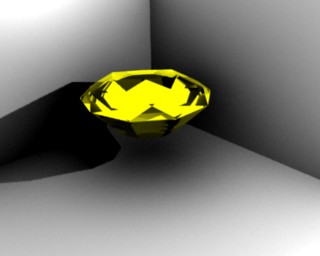 You have a subsurfacemodifier on your model, and the subsurface is not rendering?
right?
In the header of the modifier ther is the small rendericon.
This should be active to show up at render.
But perhaps you ment something different?

I should have explained this better the first time.

I’m trying to make a jewel texture and I’ve been working with it to get internal reflections.
Now I have it reflecting itself off the subsurface, but the front face isn’t showing correctly.
As it should be faceted and shiny.

I’m not quite shure, but it looks a bit as if not all normals are pointing outward.
If so, select all faces in EditMode and press Ctrl + N and then Enter the OK.
This should do the Trick, but maybe I didn’t saw the Form of your Object right in this pic.

The normals seem to be calculated fine.
Actually I have a photograph of a ruby that looks quite a lot like this.
I think the black spots are caused by the gem’s focused refraction or something.
Which leads me to believe I’m heading in the right direction.

I have the refractions (or at least an illusion of them) by combining the SSS with a tightly limited Ray Transparency.
(Which, come to think of it, may be a cause to my problem.
I made the subsurface show by making the surface transparent.
Now I can’t see the surface.
Well of course not, it’s transparent!

But anyway, now I need to see the surface again, while retaining what I have so far.

Then I can tackle the other issue of why it’s not reflecting through the bottom.
A gem should focus light through it to illuminate the entire thing, right?

How many levels is the RayTrans set to? For something like this, you probably want at least four or five; I would tend towards >10.

Well, now that the edges are sharp, and the surface is showing (sort of,) it looks much better.
I also reduced translucency and increased gloss (thanks Odjin)

Well, here’s what i have so far
Critique is always welcome, advice is always helpful.
Even if its crap, please, let me know!
So I can stop wasting my time on it.

But I think this is really getting somewhere.
Made with Blender Internal. 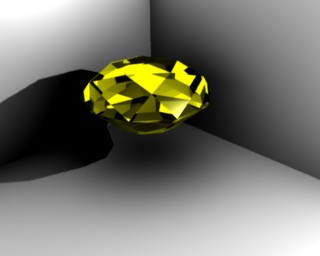