Hi.
I do not offer discounts, because the various stocks where I sell the same models provide significant random discounts by themselves. Also, some models can be obtained at blendswap for free.

Wow, just noticed that Topology Works has got Top Hours Read (2020: Year in Review)
That’s interesting to know.
GIFs have probably done a pretty good job of it, right?

Yup, I think they did a great job! Congratulations!

This is really amazing stuff! I like your animations, how did you do that? Really cool, keep it up!

Modeled a next one 100% quads pack, and made a single model from it with stop-motion animation. 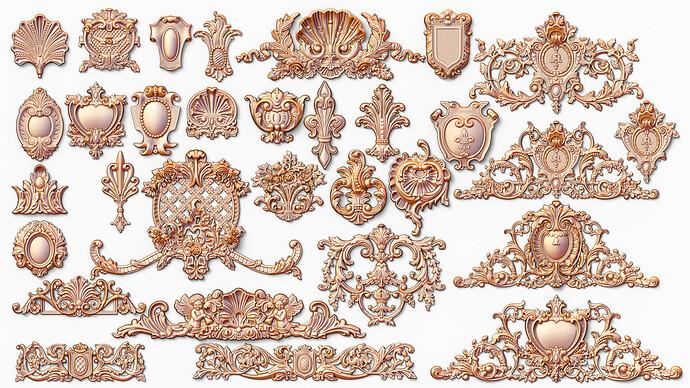 awesomeee!
when the ̶f̶a̶c̶e̶ topology is perfect!! 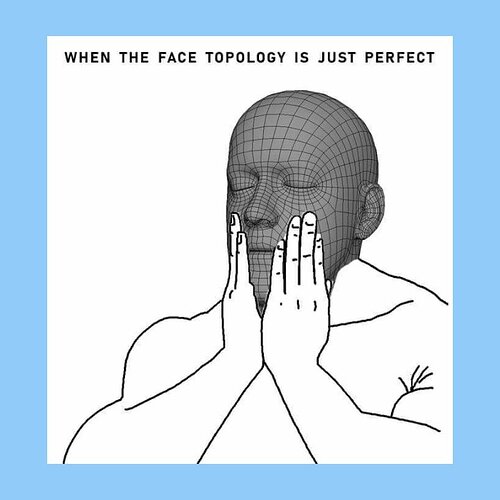 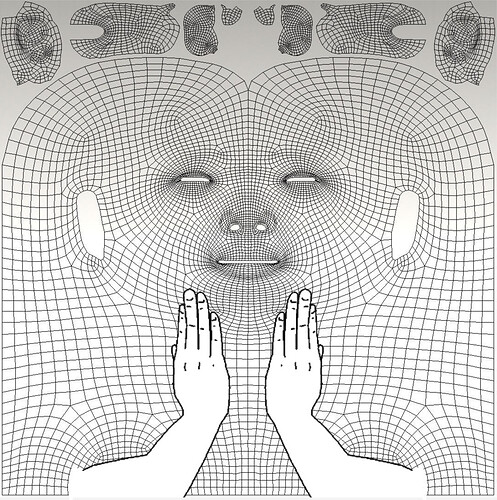 Well, CG memes are funny.
So why not)

Finished the next one.
No animation though. 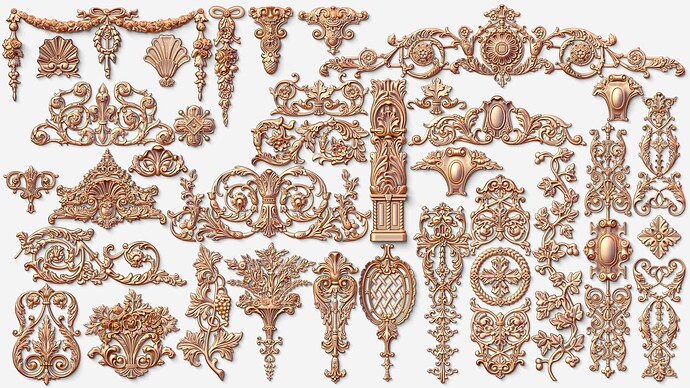 Gorgeous work!
Do you have any restriction for polygons count for one object?
As I see you try to achieve single mesh if possible. Is it so necessary?

Hi!
Nice questions, but I am not sure that I can answer them out of a full context.
So I will provide it first)

The goal behind of those models is to design a workflow that make them possible.
You may be familiar with traditional ways of such a modeling - displace way, that brings heavyweight models and widespread sculpting+retopology way, which is quite long.
They was quite doubtable, so I tried to find out a single solution for both complex surface organic modeling and retopology of a variable-density surface, fusing them into a single affordable workflow.

During a workflow design it is always better to set up higher requirements, because if you will solve highest complexity, you will solve everything that is simpler automatically, or at least will figure out that it is impossible at some point, which is also a valid result in workflow design.

Here are several conditions/goals I set to follow and satisfy:

To satisfy such subjective condition there was a need for proper business limitations.
In my case, I made those models to stocks, and all the profits has gone to different opensource development, so for me it was a lot of free work, since I limited my opportunity to get money for it.

Yes, it is a nasty business requirement, but I decided to try to satisfy it in order to make sure that the resulting workflow will be pleasant to perform.
Technically, you can’t perform a lot of heavy work for free, the only case it is possible - if you will turn a workflow into something like a gameplay. That was the main goal of a workflow research.
Computer games use such a technique to became popular, since they are related to computer work.
Also, game soundtracks are usually written taking this aspect into account.

And all of this worked - the resulting Stripe modeling workflow indeed

As it turned out later, it is possible to use gamepad+mouse

Interesting. Can you expand how you work with gamepad and mouse?

Well, okay.
The original goal was to investigate if it is possible to make modeling not sitting, but lying on your side.
Stripe modeling workflow fit that condition just perfectly.
To emulate keyboard with gamepad I used Joytokey for Windows and Qjoypad 4.1 for Linux.

About keymap.
It occupies only left side of a controller, because right side is not accessible with a single hand.
There are also presented several tweaks that we made before using controller to satisfy relevancy demands of a functional access, so we use the same keys layout for any kind of work (stripe modeling, box modeling, CAD modeling, sculpt, animation, video editing, using keyboard, gamepad, pen tablet, etc) 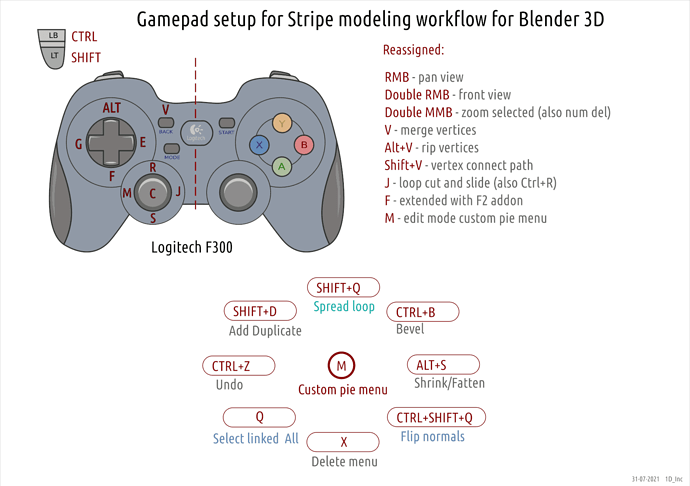 Working lying down. Fantastic. Did it work out?

Well, using keyboard will always be more comfortable and preferrable, at least because of a wider range of workflows supported.
But.
The ability of remapping of some kind of a workflow to a gamepad with its keys limitation is the best test for toolset compactness.

The process of reachnig any king of effectivness have to be challenging, that influence the quality of a result. During map design to a limited keymap you have to rethink every single tool that you are using, including its relevancy value (frequency of using).

It is important to know we can make modeling, displayed in TOPOLOGY WORKS video, using nothing but a mouse and a half of a gamepad, since other tests types are way more subjective)

scam of the century ! 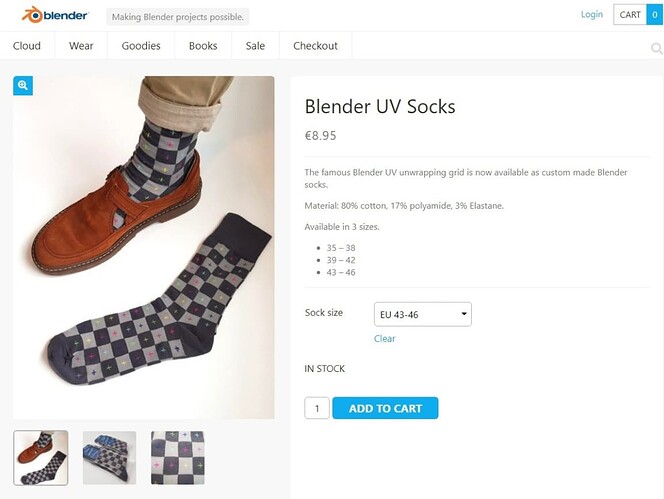 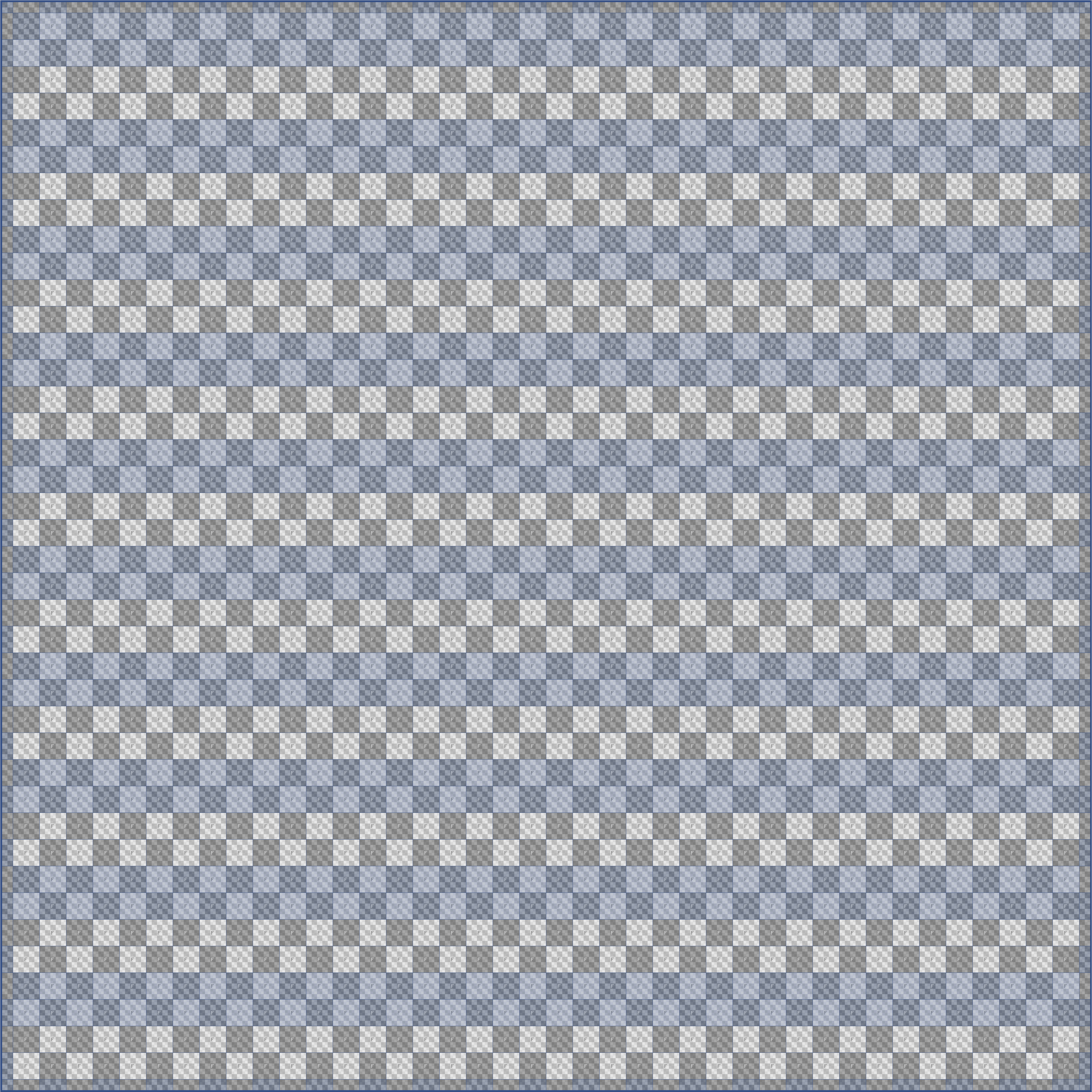 I decided to make 100% quads Pearlworks CP-145 element as a free sample.

I asked my friend to sculpt it, but as a result finished it first by pure stripe modeling. 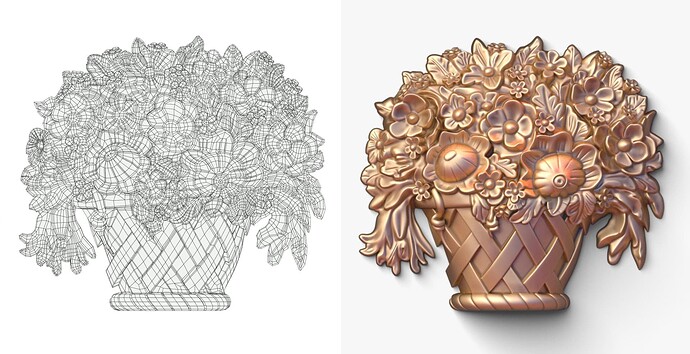 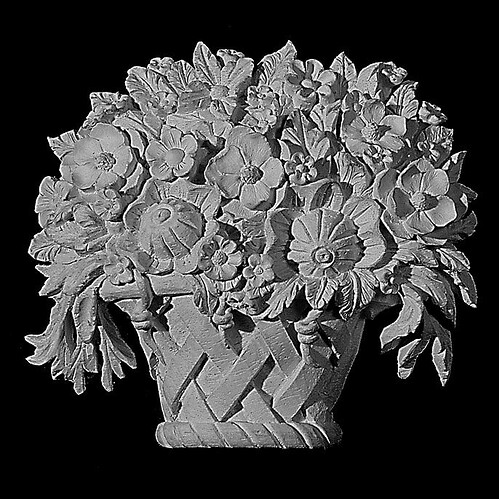