Set in a fantasy world where humans still fight for money and fame in arenas, you play as Torin; who proved himself worthy of becoming an apprentice to an arena master in exchange for his servitude and other benefits, such as lending ‘energy’ to his master. However, when Torin reaches the finals in his home city Sorra’s competition, he is blackmailed into forfeiting from the competition by the mysterious Elf master of his opponent, and is shunned by his master as a coward.

Left without a home or job in the city, Torin decides to track down the mysterious Elf, but finds there are schemes deep at work that threaten the survival of the humans.

I created my pathfinding using the A* search algorithm and optimising it with a navigation mesh, which you can get here:
http://blenderartists.org/forum/showthread.php?p=1571264#post1571264

Looks good. Graphics look pretty cool. Any particular reason why all the characters are naked? The mole person is the only one wearing clothes…

Any particular reason why all the characters are naked?
Because I haven’t modelled the armour yet or set up the inventory and loot system, haha x) The only other character you see in that spellwheel shot is a temporary target for shooting spells at, and it’s just Torin’s mesh

Edit: I’ve uploaded my pathfinding demo. I’m very tired atm the moment so my explanation probably doesn’t make much sense, but python programmers should be able to tell what’s going on from the demo. I hope.

Progress is going slightly slower than I’d like with upcoming exams, but I’m getting there.

I’ve uploaded a youtube video, exciting! However I forgot to show some of the features. Anyway, here’s the link:

I think that’s all for now.

My evil twin, at last, we meet. Let this be our final battle…

Looks great. I like that…purple… cloud of death spell (I forget what you named it :o). Awesome work, though.

Hi. Just to keep this thread up to date:

I’ve changed the melee system. The old one was boring to play, so now you select the different types of melee attack (main hand, offhand, area/spinning attack) and left-click to use them, or right click to block.

I’ve also changed the theme of the spellcasters, to be not so necromancery. The high level spells are starting to look quite epic now. I’ve attached pictures of them.

The AI has been improved in various ways, and I’ve added potions. Spells can be selected with their shortcuts.

I am currently working on the animations. Once I have completed those, I will upload a quick video. 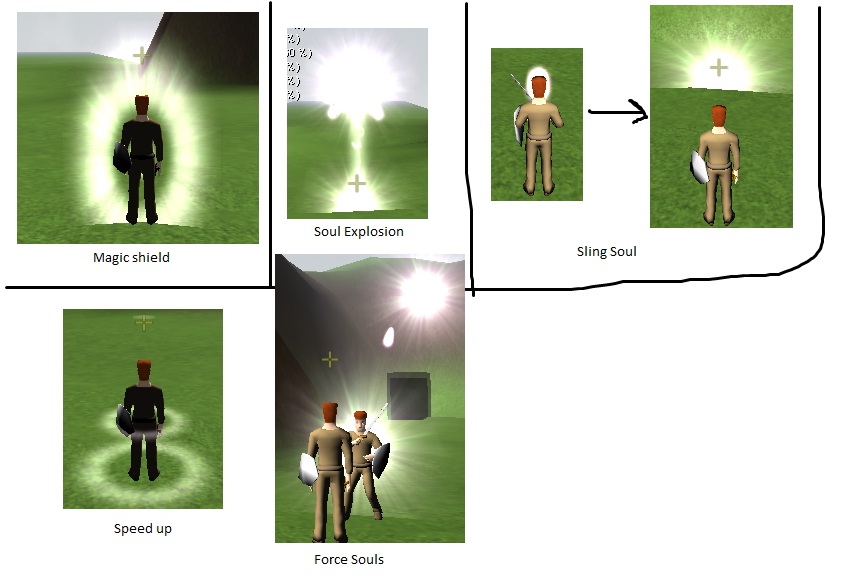 Hi Eterniam,
this game looks really intresting and i liked the way u started creating it…like, u first created the skills and the characters capabilities such as strengh and all the system damage stuff etc etc…congratz dude!
Yours,
ShortK

I wanted to get it all working before I started on content. It’s a lot easier just having to keep track of one test scene than constantly having to make changes to all the scenes.

Added a new video showing the basic group AI, although there’s still a lot to do for it. All the NPCs you see are instances of one NPC.

WOW!!!
You rock dude seriously!!! you thought about the most important things,the mana bar goes down just in a perfect timing and same with the Hp red bar, the logic is perfect i mean the walking and the enimies range and the enemy dies in a reasonable time!
i wonder if u have any script tut or something like available on the world wide web?

I wanted to get it all working before I started on content. It’s a lot easier just having to keep track of one test scene than constantly having to make changes to all the scenes.

thats true but it works only when u know the books unlike me unfortunately =//// i wish i new scripting and logic better than modeling …
anyways when i look at ur game logic i feel a bit anxious bout it but i think by tomorow imona get temporarly cured by developing my first char(personal problems kinda getting in my way but ill overcome just like everything in my life…)
All the best,
ShortK

Not a large update. I’ve been too busy with schoolwork to do much
AI positions itself better, added some spells/abilities and changed the spell graphics a bit. Changed the movement system a bit, so that you are stuck to the ground.

Renamed to just “Torin” for now.

Just added in the loot system and thought I’d share it with you. It’s reusing 4 scripts from my inventory so it was pretty quick

Works similar to Oblivion’s loot system, except items are not ‘looted’ until you close the loot box.


Also worked out where I was going wrong in my screen captures, so it’s much better quality now!

:spin::spin:Oh i missed this thread as usual lol,i get a bit lost when theres no option to look at the subscribed threads in the forums control panel…i mean there is but it doesnt work here ,at least for me…
anyways i watched the last update and all i have to say is : AWE to the SOME ,i feel envious bout u at this right moment (in a gud way OFC hehe :D) ,the game is getting cooler at every update and one thing i thik u could build is like ,if u add a sorta Charcter Items panel which looks something like it:

yeah i know it looks crappy but i just improvised that with paint brush from my notebook pad …
so u would have space for rigs,bracelets ,sword,shield etc and u could add a Chest items so when u loot u put it all in the Chest items and if possible add weight limit and items Qty limits as well but guess this would be for later when ur more advanced wit ur game…
anyways i hope this was a constructive Critique hehe
but ur game looks great so far and the spining skills looks fat(wrong spelling) too :spin: …
All the best,
ShortK

This looks good. I would love to get involved if you need anything done.

Thanks for the suggestion Shortkey. My inventory system is by no means finished yet - I plan to replace each inventory ‘object’ with an icon/smaller text field with just the name of the item, and then display all the information (e.g. similar to the boxes you see now) on mouseover.

And kidramez, thanks for the offer but this is just a personal project. This project is mainly to develop my skills in all aspects of game design, so I need all the pratice!

Hey Eterniam,
oh yeah inventory is the proper name lol ,my brain kindof blanks out sometimes and i forget the simplest names lol…but bout ur game it is really impressive how u deal with bge and when i say impressive i mean that it s got a professional direction if u know what i mean…
and im focusing in exactly the same path as u been thorugh already so by that i mean ur stuff is really inspiring!!
Gratz again

New inventory/ui update. The bottom more detailed description is of whatever is moused over. 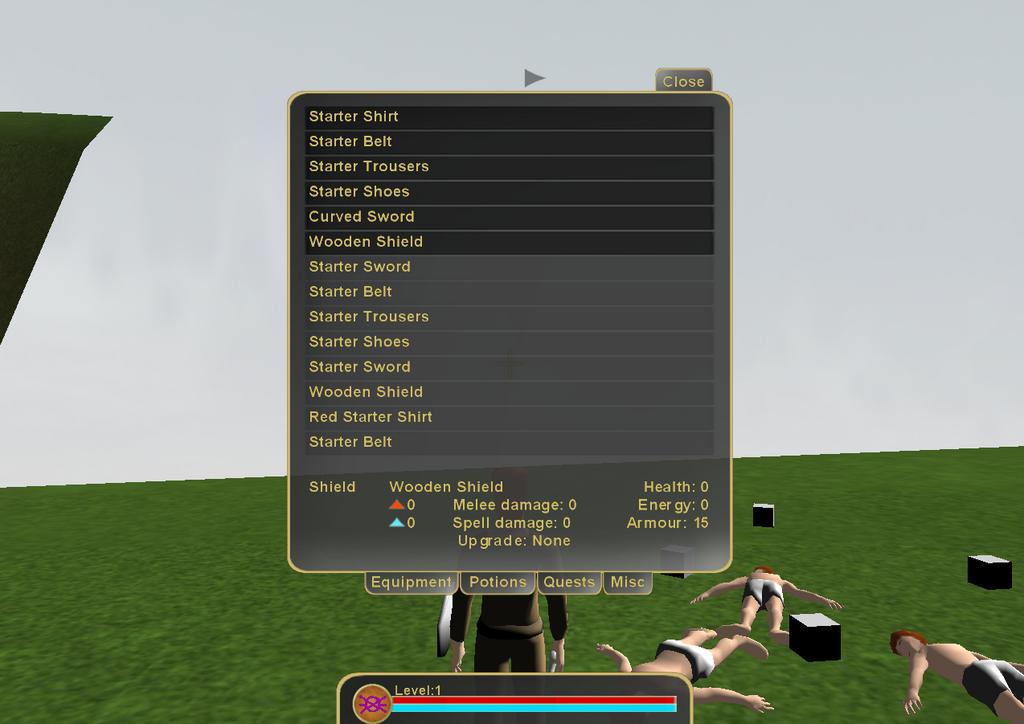 I have watched all of your vids and I quess your experience is kinda like following on a rate of 1/10:

Please correct me if I’m wrong.

Anyway, I’m working on a rpg project my self, and I was wondering if you would like to join. I have one other person working on it.
Here’s the thread: (really outdated though)

Please check my youtube channel and the screens very quic. (It’s in the thread)
But uhm, in a little while we’re gonna rename the project Face of War and strart a new updated thread on it.

So let me know. If you have msn tell me, i’ll pm you my email.

Btw, I would rate my self lower then you. So please do not take me as someone that think your game is newbish or anything. xD It’s really cool and i think the spells are the most awesome in the game. ^^ I just hoped you would also help us out a bit cause your looting system/menus/battle system look really good.