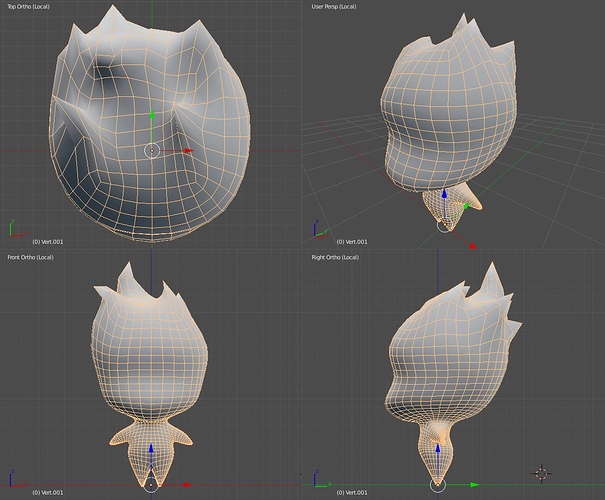 I have this little guy here. I began with a skin modifier and then adjusted the mesh. Basically he has the shape I want, but I’m not happy about the top of the head. When I made the spikes, I simply used proportional editing and now I’m stuck with a mesh that is too dense at the bottom and not enough at the top. I’d like the “hair” to be smoother. Applying a subsurf mod works really well, but it makes the whole mesh denser, which I don’t need. Basically I’d like to subsurf only the top but I’ll be left with ngons at the intersection if I separate, because subsurf divides faces on two axis. I need more density and smoothness on a single axis. Any ideas?

I know you might think the face has horrible topology but the face but it’s not going to be animated. Eyes and mouth with be a texture.

Just isolate your head, smooth subdivide it, ctrl+alt+rmb on one vertical edge of your head mesh and shift+rmb to select one edge that’s next to the center edge loop of the head and choose “checker deselect” and once every second edge loop is selected press X to dissolve selected edges.

This is what I had in mind: https://www.youtube.com/watch?v=M6NXmljwFMk&feature=autoshare

Thank you, this is exactly what I was looking for!