Back almost 3 years ago i started this travel blog that i made mostly for myself to remember all the things i saw and also share those stories with my family and friends. The project is colorpixel.org

However, just last year i saw that i had many people from all around the world visiting the blog.

So i took all out and made it more professional looking like. All made in Blender 2.79, rendered in cycles on a powerless Mac computer (i5, integrated GPU and poor RAM - for a few weeks had no mouse either)

The point of all (concerning Blender) is to do something low poly, representative for me and the place visited and that would cost me less than 4-6 hours to make (without the time necessary to cook the idea). After 8-10 hours a y of work in CAD, Blender is my breath of fresh air at night or weekends. So time is short… energy is mostly depleted…

How i came up with it?

I followed Andrew Price (thank you for everything) that said that following drawing courses help even 3D blendering. So bought books and drew.
To keep it even more challenging my wife bought a book to draw everyday a new stuff.

So after a serious fails i was like i can do better in Blender.

So here is 001 Valenca -Portugal as seen on the Blog. It is a fortress city, not that big and not that visited ( as others that i will present) 002-Tui - Spain ( just across the border, a few meters from Valenca) 004- Braga -Portugal - also a very old city, named in the honor of emperor Augustus, and a major capital during Roman Age
Part 1 symbol 006 Regua - the birth of the famous Porto Wine 010 -dinosaur footprints at Serra de Aire
(First time i did a living thing in Blender; plants don’t count in my statement) 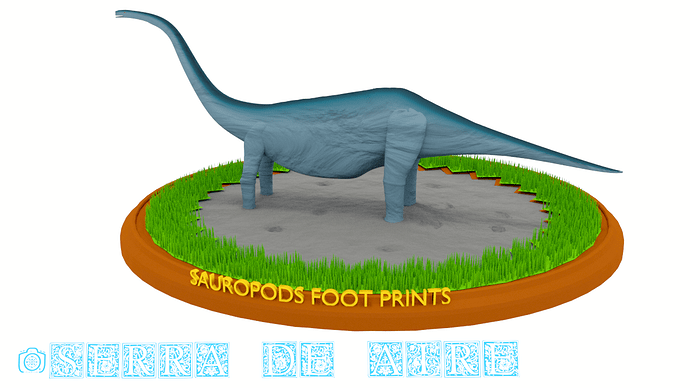 011- Fatima - and the religious destination.
For this i spent several days of work time as it was my first time modeling humans ( at this point i still did not read tutorials on bones, not had add-ons to help on that) 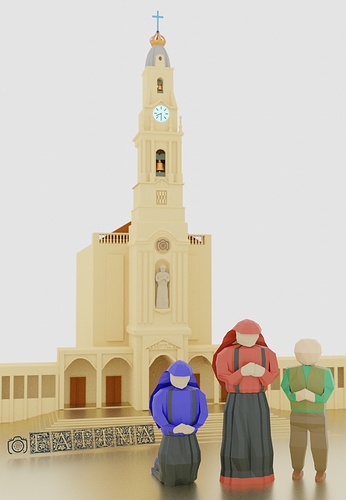 012- Nazare - the place to see one of the biggest waves in the world
(Did not have the chance on my trip, so the water was really calm) 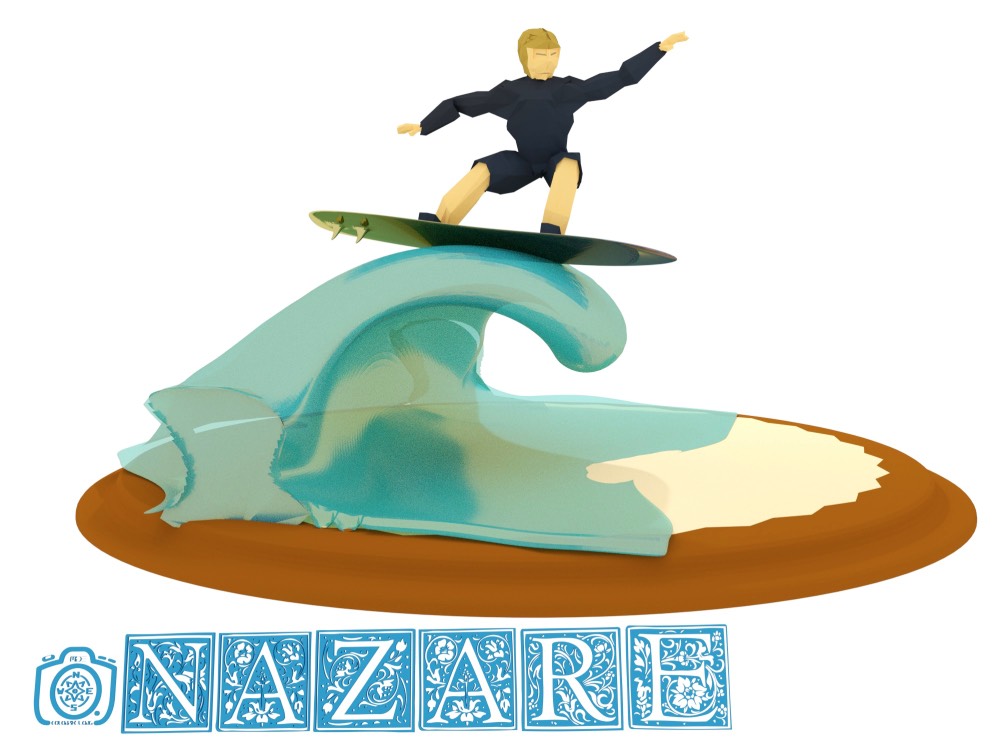 And now i am here in Obidos - still Portugal. 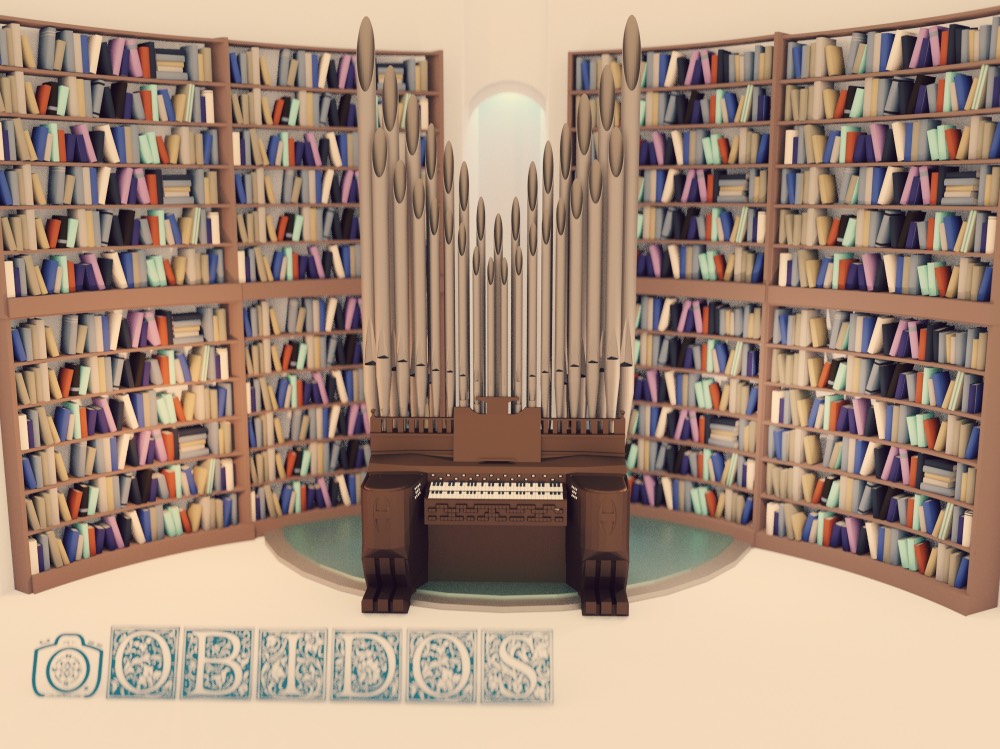 Last project in 2.8.
Decided that Blender 2.8 is not for Mac OS so i am running a zip file with 2.79b - also in tye meantime i got myself a better mac with discreet AMD graphics that makes LokDev go with a blazing speed of 0.x fps… Not even 1.

Here is a new batch of works done for www.colorpixel.org
Peniche -> it is a natural reserve in Western Portugal.
I tried to make one of the native flowers but the end result looked nothing like the real deal.
So I made it more artistic with a water (Ocean). Like always i try to keep it simple and representative. Lourinha
This is the first time I model a dino head.
I started from a ROOF like primitive, added lines and carved the interior. Then made it thick and Subdivide. Much harder to draw the image from the head… would have been easier to have a real 3D model. Sintra - main city
My favorite place in Portugal is Sintra
In the next weeks/months I will showcase 5 works starting with the National Palace of Sintra
All is modeled, no textures.
The roof is made ceramic by ceramic with random texture on it to simulate the diversity of colors. And from the huge estate of gardens, lakes, parks, towers etc I took one of the Wells (Initiatic Well) as a representation of Quinta da Regaleira.
For those who read comments, this is actually an inverted tower, and even if it was named Initiatic Well it never was used for water purposes. (actually is more Supernatural stuff). Anyway, this well it is the reason I went to Sintra in the first place (and the Pena Palace).
Find out more on www.pixelstravel.com. This is actually the second take on making the symbol in Blender, as I had and still have troubles with making arches that go diagonally.
I think that this kind of structure is best done in CAD-like software (in fact I tried to do it in CATIA V6 at work and was no brainer, now with COVID).
Here is the first take: Moors Castle - Sintra - Portugal - Portugal Europe
I tried to make a low poly (like most times) symbol for the Moors Castle.
It is actually the first time I apply textures using UV.
Now maybe I went too far with the low poly trees. My biggest work for my travelblog that should have been done in a few hours, took me close to 18…(purpose is 3h of modelling or 8h max for finished project)

It is a part of the Castle of Pena, also in Sintra, Portugal, Europe.

I drew parts of it on paper to see what I keep and what no because I really wanted to finish it before I had to resume work. Actually they called me to say I will stay one more month home so I went crazy with the details (in Blender). For the first time, I used Freestyle + HDRi image.
Also, I watch the first tutorial for a long time - 100 tips and trick in Blender - and that helped me a lot.


It is not mine but it is well done so people should see it.