Treasures of the Deep Dwellers RPG

Another update today, the game finally has a name, after 2+ years of being untitled.

I’m updating this post as it’s the first thing new readers will see and the old pictures and things were a little out of date.

First of all here’s a gameplay video:

And a scene I’ll be using for a main menu background:

You can find out all about the game at my development Blog Here:
Pickled DevBlog

I’m (Still) looking for people who would like to add content.
If you’d like to make some dungeon props, monsters, music, sound effects, buildings for the towns, or 2d art for starting screen, loading screens or parts of the UI, I’d be happy to include them (as long as they meed a few basic criteria). If they are really professional quality we can even make some kind of agreement on % profit sharing, if the game sells.
I’ll also be making my monsters and props available for other game makers to use.

These are the kind of props I use, mostly realistic but simple, very low poly and found textures.

Here’s a preview of one of the monsters, the ubiquitous skeleton.
I’m working on a way of highlighting objects using inverted geometry. I’ll probably be using it for showing magic items and effects.

And here’s an example of how the dungeon will be dislayed. This is just a mock up, right now I’m using 5x5 squares for each dungeon segment, but the final game will use 10x10, allowing for more detailed and more varied tile sets (pillars, pits, varied width tunnels etc…)

I would certainly be interested. You can see my work on MonstaArts.com.

This is really good and i really like the style of the game,keep it up

very nice work. what kind of heroes will it have? wizard, worrior…?

I’m also looking for suggestions and inspiration about monsters, items and especially spells.

I want classic RPG style spells, but they should be new and interesting, so not just “fireball”, perhaps “fire whip” or “lava droplets”.

There are three types of magic:
Fire-Plant-Storm
Using the following colours:
Red-Green-Blue

Magic will be handled by using items, wands, rods, scrolls, books, potions and poultices.
There may also be a number of simple magics that can be taken as feats, such as read magic, identify item, or counterspell duel (where you attempt to drain an enemy magic user’s ability to cast spells before they can use them on your party).

I want magic to be quite random in the game, so not every 1st level wizard starts with magic missile, but instead they will soon find a scroll or book with a spell that they can use. It might be a powerful spell that drains all their mana and leaves them stunned for several rounds, or it could be something they can cast a dozen times with little effect.

The game will be random in giving out treasure, so if the magic is random too, the player can get a very different exerience every time they play, and will need to develop new tactics each time too.

All low power spells will be both weak and affect a small target area.

Am i understanding that you will be using Blenders game engine? If you would like my help give me a list of 5 things or so you want modeled (hard surface ) and I will sent you back what I come up with. Also what scale are you using?

very nice work. what kind of heroes will it have? wizard, worrior…?

For the first game there will simply be humans, there won’t be any classes. You can customize their adventuring style by buying points in different areas of advancement by spending “Karma” points.

The type of characters you can make depend on how you spend your points, you get 5 karma points at start and 3 extra per level.
If you spend a lot on speed and stealth skill you get an assassin. Lots of points on strength and stamina get you a tank/fighter. Points spent on willpower and Divine favour gets you a priest, while speed and willpower are great for making a wizard.

You can specialize your characters, or spread thier points around to get a more balanced character. There are benefits to specialization, such as early access to powerful feats or powers, that come when you reach a milestone. For example, at strength 3 you get the knockdown attack, or stealth 3 gets you the backstab feat. The maximum score is 10 in any one area.

Overspecializing can be a problem though, you could spend 10 points on only speed. You get 10 attacks a round, but you can only use a dagger or staff (doing very little damage), can’t wear armour and have little chance of scoring a hit on even weak enemies.

I’m not 100% sure on the categories yet, I may merge some attributes, or add more. I’ll see how it goes in playtesting.
For the sequel I plan to make other races, such as the bird men or beast men available as playable characters.

Am i understanding that you will be using Blenders game engine? If you would like my help give me a list of 5 things or so you want modeled (hard surface ) and I will sent you back what I come up with. Also what scale are you using?

Hi, thanks. Yes I’m using the Blender game engine. One think I’m looking for right now is dungeon props. That includes tables, chairs statues, torture devices (such as the iron maiden) ladders, boxes and crates, and things like that. Also potions and lamps.
If you can model something in high poly I can bake it on to a low poly model.

I want to make nearly all my props, monsters and tilesets available later for other game makers to use in theri own projects.

This looks great. I love your characters, especially the blue bird!

I’ll also be making my monsters and props available for other game makers to use.

I would be very happy if you did this, they look great.

Very nice ideas and props so far!
I hope to see this game go far

When I’ve finished all the monsters (nearly done) I’ll release them as a CC resource for other game makers.

I won’t release 100% of the content, because then there’s no reason for anyone to download or buy the game itself but most of the stuff will be available for anyone who wants to make a game of their own.

I’ve been working on monsters and characters for a while and have a whole bunch to add. 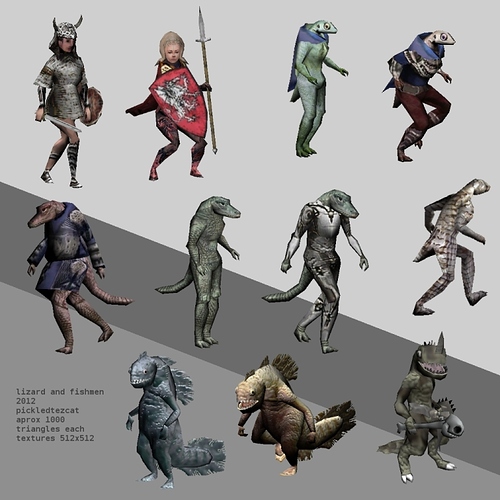 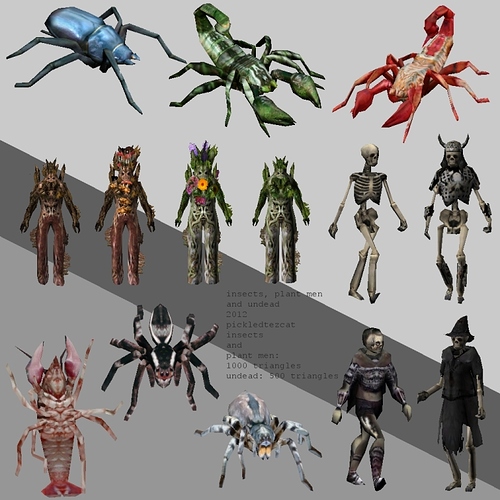 This weekend I’ve been working on some dragons for the game. 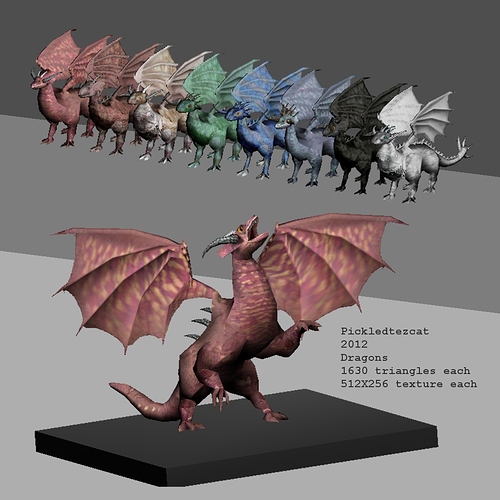 Very nice, I must say!

Very nice, I must say!

Thanks, I’m hoping it’ll look good when I put it all together.

Here’s a preview of some more of the monsters:

The Giant Scorpion looks great, as do all the other creatures/beings!

btw, is the shadow on the ground for each model a texture?

The Giant Scorpion looks great, as do all the other creatures/beings!

btw, is the shadow on the ground for each model a texture?

Yes, it’s just a single plane with an alpha texture. I plan to use tex face materials so that the game will run on any old crappy laptop, just like an old school game.