Here’s a game I made for the Scary Four Digits(64digits.com) called trick or treat!

You can find it here:http://www.mediafire.com/?zh9dcys3kuikai3

Also, for those who want the source that made the Exe or who has an OS other than windows, click here: http://www.mediafire.com/?ntq56jufv35ujbb
It extracts out to 30mb, to run it just move it to where the Exe used to be, and work some magic with batch files or whatever :P. I would do it for you but I have no idea what I should do for other OSs apart from windows Batch files, sorry

And here’s some screenies Downloading now, I might make a video of some sort. (Assuming it runs at a decent speed of course)
The screens look good, can’t wait!

*EDIT: As expected, it ran at like, 10FPS.
Other than the major lag, it was cool! I like it

Lol, yeah I should optimize it a bit more, might make it multitexture :D. Thanks for playing! 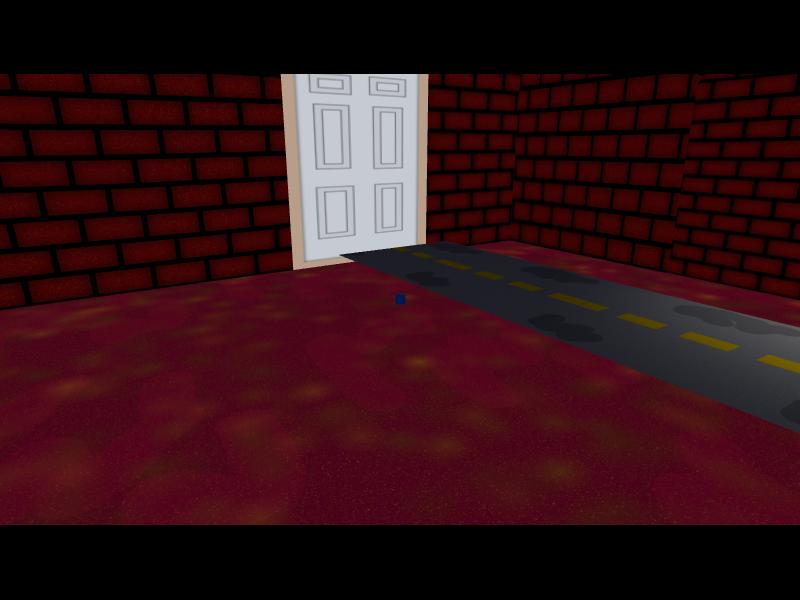 The rest of the game looks pretty good, the only reason the road looks like that is because I accidentally put it a little bit above the ground. I’m sure you’ll live with something that you only see at the beginning of the game :P. Try actually playing it, I’m sure you’ll enjoy it more then :D. I will fix that in the next update, make sure to point out any other problems :).

Ok, I’ve made it multitexture(It looks better in most cases and runs 3 times faster lol :D). The link is in the opening post, hope you enjoy! Bug fixes will start coming after the voting period for the Scar Four Digits is over :).

Ok, I’ve made it multitexture(It looks better in most cases and runs 3 times faster lol :D)

Nice!
I’ll re-download it in the near future, it was a pretty cool game… except for the part where it ran at 0.1 FPS xD
(and the fact that the street GOES INTO SOMEONE’S FRONT DOOR LOL)

Lol, it should now run at 60fps(It can on my 7 year old laptop lol :P), and I fixed the road issue :D. Can’t wait to hear what you think now that its playable

I have to say, I find it amusing that the support area gets more comments than the finished games :(. Just wondering, why is that? I see the same thing on most of the other games here, that they get barely any recognition. Heck, even the commercial ones only get a page of comments, its really strange

For me, it’s because most games are just uninteresting, or lack any real individuality.
There are many games with models that reflect almost no time investment, or skill, and game mechanics which don’t give the player anything. This is like watching bad films; they have the same “old” plot, and they offer nothing to encourage you to persevere.

This is why I, as an individual, do not frequent the Work In Progress / Completed Games section. I saw a post by someone somewhere which stated my feelings for game development, which is that you oughtn’t show more than two or three screen shots unless things have really changed. If you post a new screenshot after you move a plant, or tweak the colour of a texture, it doesn’t keep people involved.

In your case, work out what you want people to take from your game. As a developer, it’s easy to expect people to have the same level of interest in your game as you do, but in reality your interest stems from the process and not the product; which is what people are going to be playing.

I am guilty of this as much as anyone else, but if we take a step back and look at the games in these sections, there are very few which are of any level of interest or individuality.

Well, I just want people to play the game and see if they have fun :D. I have invested a month into making this, and with a total of 30mins of gameplay time, voice acting, decent mechanics and quite a few new ones, and information about supernatural creatures I honestly think this is a good game. I have got my friends to get their friends to play it and most of them enjoy it and almost finish it(And they don’t know me so I assume it isn’t biased), so I just don’t see why only 2 people would play it and comment.

And also, even though what you said about most games lacking originality is true, all of the games that deserve praise like torukunsamas project, BluePrintRandoms, abc123s, don’t get many comments. Even the commercial games that manage to sell decently don’t get much, and that is like the epitome of an indie game developers dream. I just find it confusing…

Also, I’m not sure if it was directed at me, but I put quite a bit of work into the models and textures to make them look decent. I know that I can’t create photorealistic people so instead of trying and failing I put all my effort into creating a fairly consistent art style. The models look pretty good and the textures of the Manticore and Wendigo look pretty good(Although the Vampyre needs a bit of work seeing how I made that earlier in development when I wasn’t as good at texturing).
Continued in EDIT

Anyway, an update:
I managed to get third place in the competition, so yay!

Anyway, Im working on another competition entry for gamejolt, so yeah.

Btw, its actually harder to make a cartoony style than realistic. With realistic you can just slap any texture on a lowpoly model and it will look rather good, when with cartoony that isn’t true. I put more effort texturing this game than any of my others even though they may look better.

I knew it. I downloaded 64 megabytes and BAM!, exe.
Any chance of a Linux build, like a simple zip and a “blenderplayer nameoftheblend.blend” script to launch the game?
It’s so sweet, smaller archive, cross platform…

Sure, I’ll get to work on that right now

Edit:
Also, don’t delete what you have, I use many external files so keeping those will make the next download be smaller as I’ll only include the blend and blenderplayer

Edit2:
Sorry, might take a few hours as I just realised I forgot to finish my GameJolt competition entry lol

Ok, I’ve updated the top with a link to the blend file that the exe consists of. I would do the blenderplayer batch script thing but I don’t have the blenderplayer for Linux, and my download speed takes hours to do anything(My 30mb gamejolt game took 2 hours to upload

Tested. It works. Theres a lot going on in the game, I liked the interactive pc desktop. It’s complex, well done.
The framerate issue is not a graphic problem, it’s physics and when it is physics it is because of callbacks: you have some permanent collision in your animated models. I say that because a scene has to be way more complex than what I see to actually consume that much amount of computation.

Although physics do play into it, the real problem is many unoptomised path finding scripts I wrote

l. Ill release another update soon with an faster one

Edit:
It runs fine on my 7 year old laptop though, which is why I think graphics are the problem. I use multi texture which must not be supported in newer graphics cards hence the slowness as it would render with the CPU instead of gpu. That’s my guess anyway

It runs well on my low end pc too but if you look at the profiling information, when the monsters come into play, the physics monitor goes up to 20% (at least on my system) and that’s not normal because the game only needs a few volume to triangle mesh collisions checks, a thing that bullet handles lightheartedly. There’s something fishy going on in that monster’s house, and it’s not graphics.
I didn’t check the scripts but unless you play with things like vertices or images there isn’t really enough data to mess things up, even if you try hard.

wow, something fishy is going on here. I just loaded it up on my computer and it is lagging real bad. I checked out the profile info and it says logic usage is at 89%, and this is right at the beginning with no enemies! Really strange, I wish there was a tool which would show which was the slowest script