Here is a tricycle I am modeling. I still have to model the pedals. And once I finish the modeling I will rig the handlebars so I can turn them and then the front wheel will turn. Probably won’t do an animation, just a pose and then a still render.

Update: I created a 3D printable version, with fully-functioning steering/wheels/pedals! 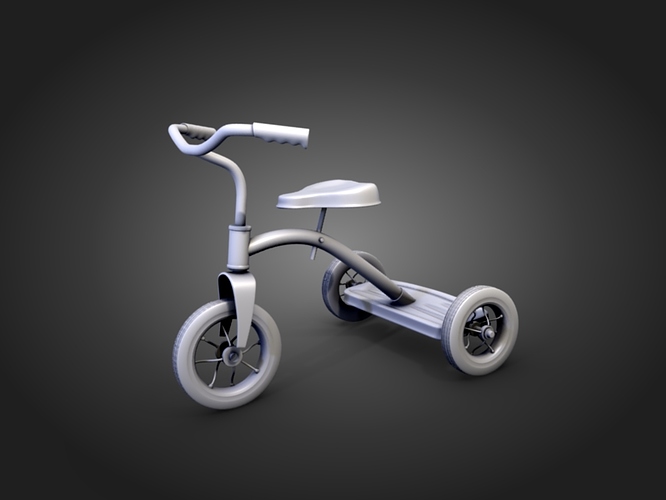 Well I had put this on hold for a while but am getting back to it. The modeling is basically finished, now I’m trying to wrap my head around rigging it so the wheels can turn correctly with reference to the ground. 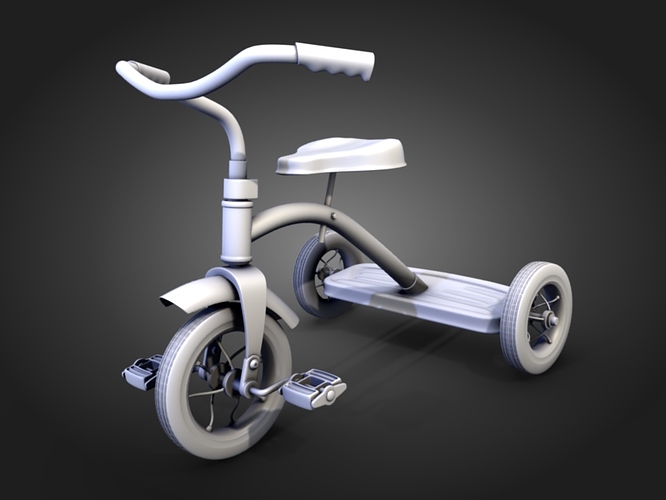 Looks pretty sweet! You are missing one important detail though… a little bell!!! lol. Are you going to be texturing this though?

Thanks Dudebot! Well the blueprints I used didn’t have a bell. Maybe I’ll add one.

Yes, I will definitely texture it, right now I’m trying to rig it first. I’ve got the pedals working so far.

nice work
could you make a close up of the wiel? i realy like it. and want to know how you did the tire

I’m working on the rig. Here’s what I have so far:

And here’s a closeup of the wheel. Basically I just created a 2D profile of the tire and used the spin tool. Nothing too fancy. 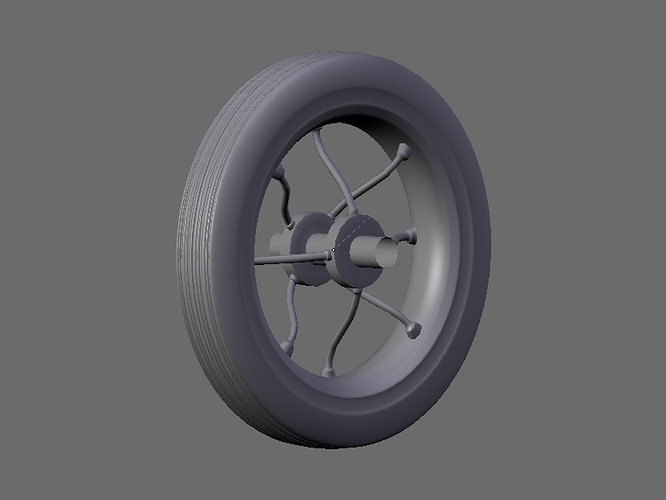 I finished rigging the trike! Here’s a test animation with the trike following a path.

do you know of any tutorials for rigging that? i just made a car and i made the wheels turn with constraints but it cant turn (big problem).

I’m not quite sure what you mean, but Phillippe Roubal is the go-to man for car rigging in Blender. Here’s his website:
http://3d-synthesis.com/tutorialsenglish.html

The animation looks pretty good. Near the middle it seems to get too fast and turn too sharply. Probably cause here is no kid on it :D. Is that coming next?

Yeah, the speed IPO needs to be tweaked. It’s really just a proof of concept right now. Not sure about a kid… lol

i like the model! nice style.
but i see one main issue on your animation: the two rear wheels seem to follow the same curve as the front wheel. because of that they seem to slide around as the tricycle turns. but in reality the rear wheels of any vehicle follow a different curve (if they aren’t steered as well). have a look at this: http://www.youtube.com/watch?v=M-J8-JTDqQE
you can see the different paths of the front and rear wheel. this applies to you tricycle as well.
i have no clue at all how to realize that in blender, but maybe you find a way…

@ walk_on_sky:
Hmm, good catch, that makes sense I guess. I too don’t know how to fix that. Does anybody have any ideas?

Edit: Well, I redid the rig as a curve modifier rather than a Follow Path constraint so the rear wheels don’t stay on the same path as the front wheel. By moving the rear empty I can control how far the rear wheels deviate from the path. I got the idea from Phillippe Roubal’s car rigging tutorial PDF.
Here’s the new rig in action:
http://www.vimeo.com/14350229

Any comments on the new rig?

I created a 3D printable version. This will print as 1 piece, with fully-functioning steering, pedals, and wheels! Riding this trike is highly discouraged though, since it’s only 12 cm tall. 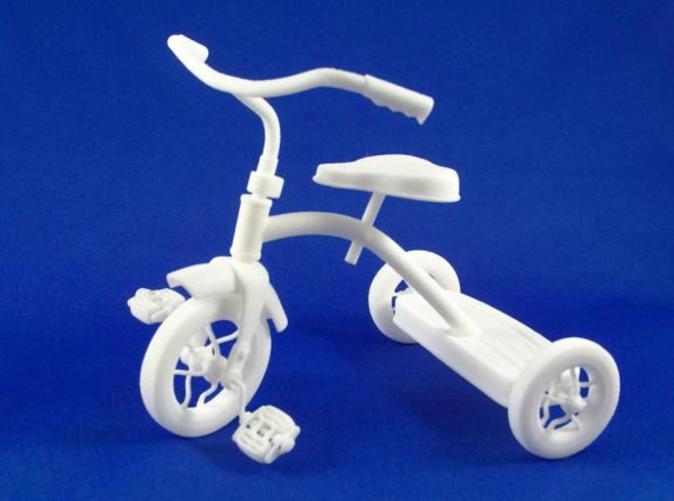 Tricycle by roofoo on Shapeways

Check out Tricycle by roofoo on Shapeways and discover more 3D printed products in Other. 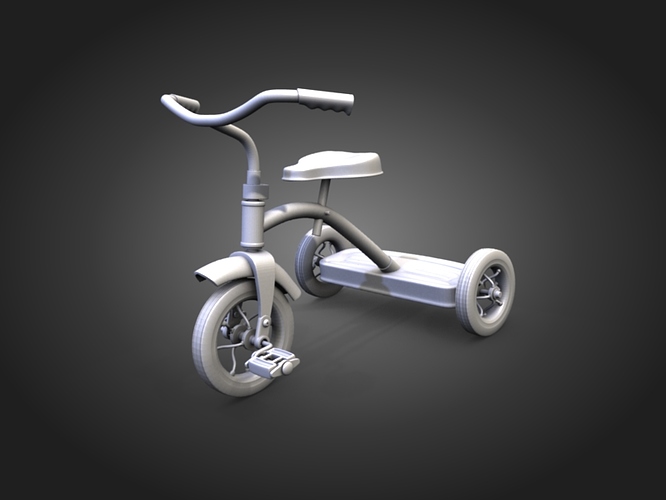 Haha, this model is freakishly similar to a tricycle I modeled for the book I’m writing on lighting and rendering in Blender 2.5. Mine isn’t nearly as detailed as yours is because modeling wasn’t the focus - great job!!

Thanks! Well it’s inspired by a certain famous toy wagon company’s tricycle, but with some modifications.

We probably had the same reference images. loved the video the rig is really well done!

I received my tricycle model in the mail today! It prints as 1 piece, fully assembled, with turnable steering, pedals, and wheels. Here’s a little demo video of my trike in action!

Available to order at http://www.shapeways.com/model/150737/tricycle.html 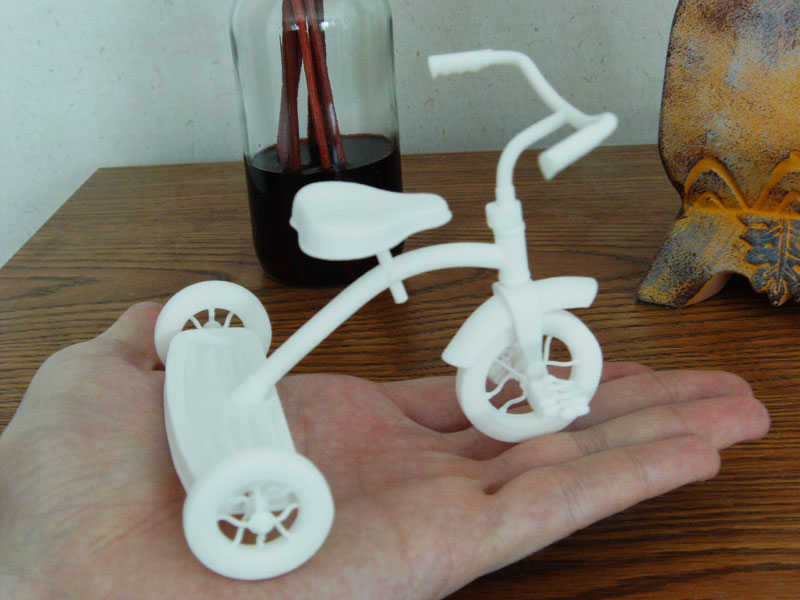 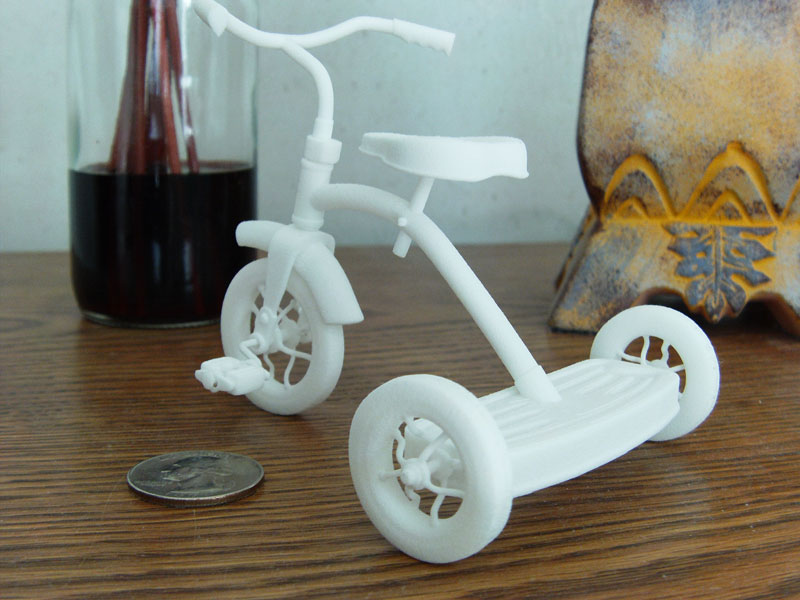 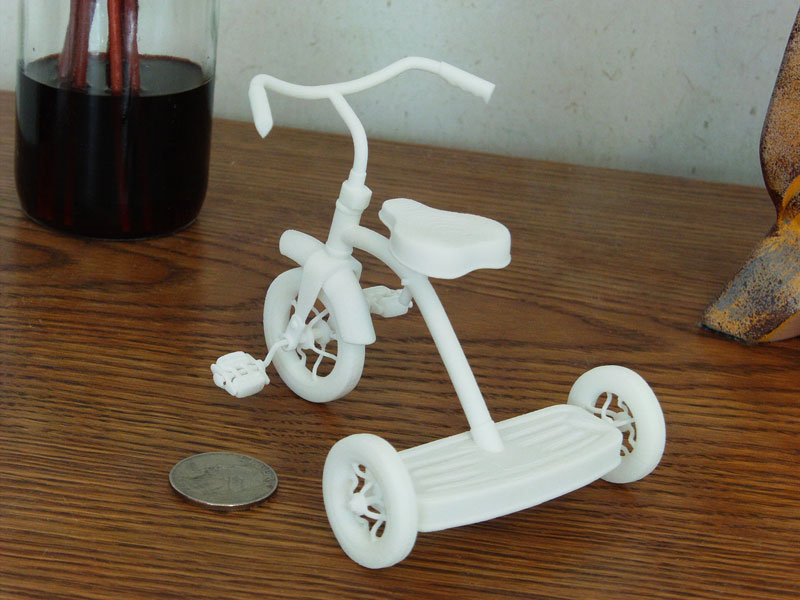 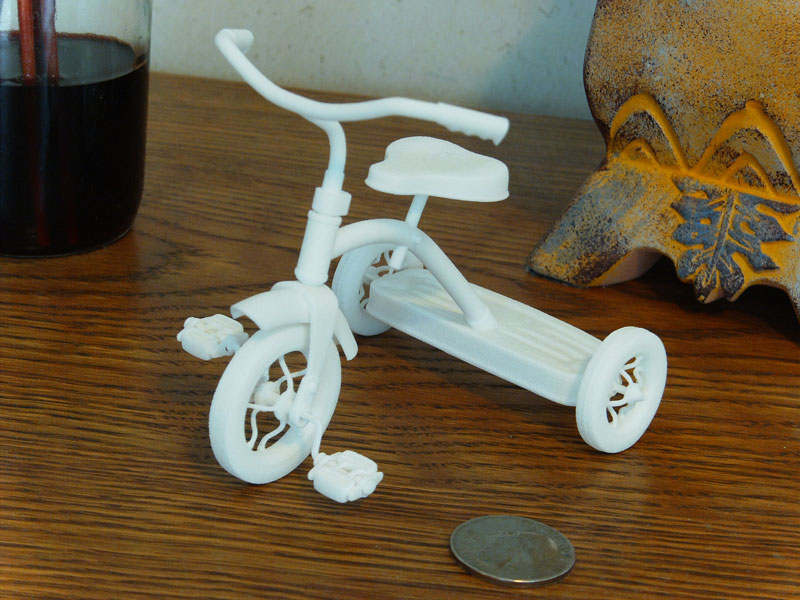 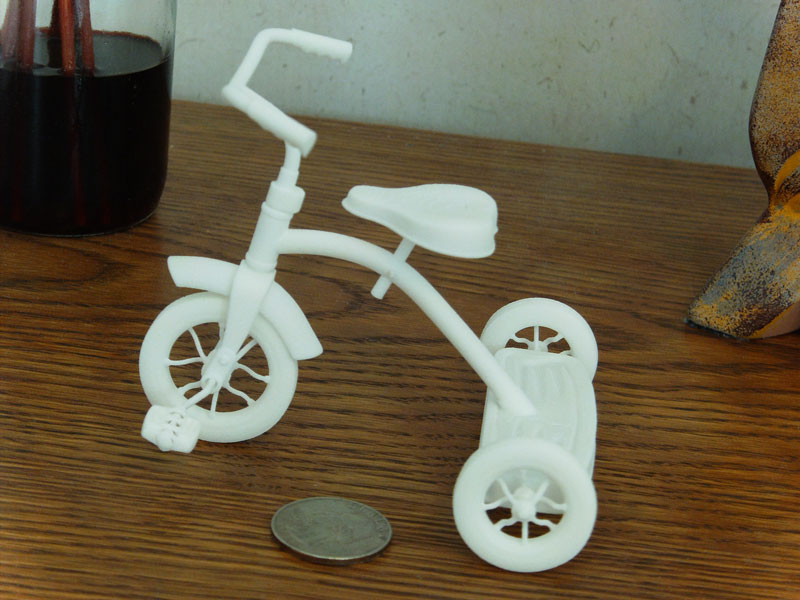 Nice work, nice model, job well done!! I have one quick question, how did you control the speed of the wheels rotating? Since it’s 2.49, did you use the stride feature? Or key the rotation by hand?