Trouble Getting Glare Node to Work

Hello. I have been working through the spaceship tutorial on Blender Guru.com and have gotten stuck as my glare node does not seem to be doing anything when used with an ID Mask node.

The node seems to work if I attach it directly to the render layers node. However, if I use a render layers node followed by an ID Mask node so that the glare is only applied to a specific area the node simply doesn’t apply its effect. The problem is that if I want to add any other lights to the scene I want to be able to control them each separately and do not want to glare to mindless apply itself to the entire image.

I attached my .blend file for reference. The tutorial can be found here http://www.blenderguru.com/videos/create-a-spaceship-part-2-of-2/. The trouble starts for me at about 0:56:10.

I checked out the blend file and it looks to me like you just need to combine the glare with the image output from the renderlayer using a Color Mix add node. then connect the mix node to the viewer and composite. 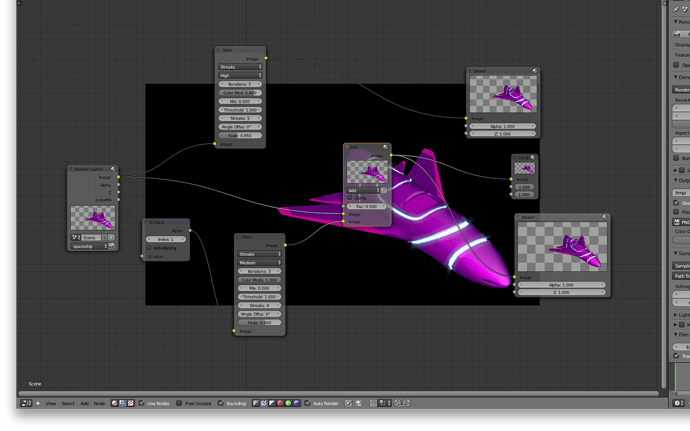 Thank you jgstyle for your reply.

This seems to have only partially fixed the problem, however. Although this gives me the control over the specific area of lighting that I wanted the glare node to affect the color still isn’t coming through. The spaceship light is supposed to have a blue tint. With the mask node it just appears white.

I realized that there should really be another light source to properly ask this question so I modified by .blend file and added a few suns for the moment. The first glare node applies to everything (not what I want). The second one (with the ID Mask) correctly applies the effect to only lights with the spaceship_light material. But, as I said, it isn’t letting the color though now.