I’m new to this forum community but I’ve been working with blender 2.8 for roughly about half a year now. I’ll get straight to the point;

I am having trouble reflecting light from mesh objects with emission shaders to an astronaut character/model that I purchased. I’ll list off the subjects in my template:

Where I am having issues is reflecting the environment off of the astronaut model specifically with the visor of the helmet and other reflective parts of the model. In addition, I am simultaneously having the same issue reflecting the astronaut model off both of the grid planes. The planes are able to reflect everything else such as the spheres, the environment HDRI & so on, but for whatever reason I can’t seem to figure out, they can’t reflect the astronaut. I am aware that there is probably an easy fix for this that is probably right in front of me but I just can’t seem to figure it out. I’ve already watched over 10 YouTube videos on what I thought would solve the issue but I have yet to fix this problem. Below are some screen shots to get a better idea of where my issue lies and I tried to capture the shading nodes/settings in the shots. You’ll see that I have several objects that are emitting light but it’s reflection isn’t bouncing off of the astronaut model. Any help would be greatly appreciated. FYI I had to use a 3rd party website to upload the rest of the screen shots because I’m a new member I can’t upload multiple media files. 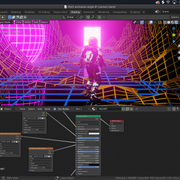 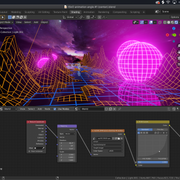 If you are in Eevee have you tried Light Probes?

it allows reflective objects to have reflections in Eevee, if this is what you’re looking for?

I gave an answer here that might help: https://blender.stackexchange.com/questions/190642/how-do-i-get-proper-reflections-eevee

Okay great, I will read it right now. Thank you for taking the time to reply to this.

Wow, this is exactly what I needed to do!

also try the Irradiance Volume to improve the lighting, it will take into account all the indirect lightings

as for your problem maybe share a part of your file, like the helmet and a light?
use https://pasteall.org/blend/

Maybe I need to adjust something

Yes from your screen shot the helmet nodes, the roughness input image should be set to noncolour instead of srgb, same for anisospheric (I think) and normal images. By the way the scene looks great!

Thank you! I did that & that’s exactly what I needed to do! I am finally able to get reflections off of the helmet & visor now! Thank you for taking time to reply to this, I sincerely appreciate the advice & tips from all of you. <3

Yes big thanks to you too moonboots. The light probes were the main issue after all. They greatly helped out.